The latest polling by the Pew Research Center for the People & the Press shows that Mitt Romney maintains a substantial lead nationally in the race for the GOP presidential nomination. The survey, conducted Jan. 11-16, finds few differences among GOP voters from various religious groups in terms of the candidate they would most like to see get their party’s nomination.1

Romney is currently the preferred nominee of 31% of Republican and Republican-leaning registered voters; his support stands at 36% among white mainline Protestant Republicans, 30% among white evangelicals and 27% among white Catholics. Newt Gingrich, Ron Paul and Rick Santorum all trail Romney and receive roughly equal levels of support from Republican voters (16% for Gingrich, 15% for Paul, 14% for Santorum). There are only small differences across religious groups in support for these candidates, though support for Santorum is substantially higher among evangelicals (22%) than among mainline Protestants (9%). 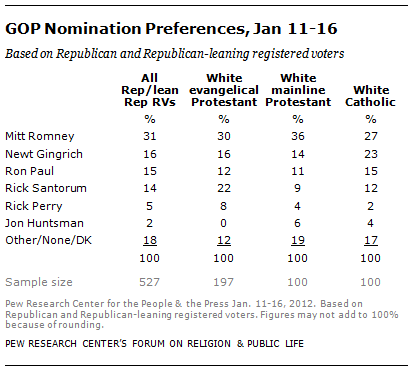 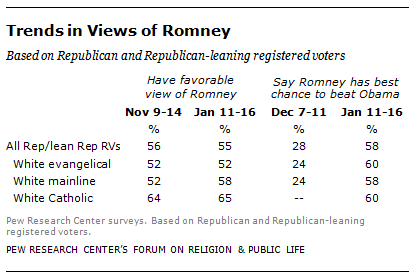 In a potential general election matchup between Romney and Obama, 50% of all registered voters say they would vote for Obama while 45% support Romney. That is little changed from November, when 49% supported Obama and 47% supported Romney. 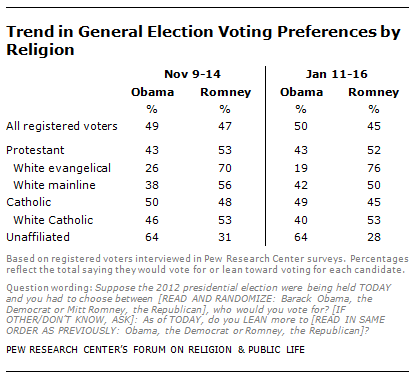 Romney’s strongest support in a matchup against Obama continues to come from evangelical voters; three-quarters of evangelicals (76%) say they would vote for Romney, compared with 19% who favor Obama. When this question was asked in November, 70% of white evangelicals expressed support for Romney while 26% favored Obama.

Obama’s strongest support among the religious groups analyzed comes from voters who are religiously unaffiliated; nearly two-thirds of this group (64%) support Obama while 28% prefer Romney. These figures are little changed over the past two months. (The current poll included too few interviews with black Protestant registered voters to permit analysis of their voting intentions.)

For a complete discussion of the survey’s findings, including an analysis of the potential impact a Ron Paul third-party candidacy might have on the general election, see “Unpopular Nationally, Romney Holds Solid GOP Lead: Paul Polls at 18% as Third Party Candidate.”

1 Data collection began before Huntsman and Perry announced they were leaving the race. (return to text)