This analysis is a section from an Oct. 21, 2010 survey report by the Pew Research Center for the People & the Press, Ground War More Intense Than 2006, Early Voting More Prevalent. Read the full report and survey methodology.

Among voters who attend religious services at least once or twice a month, 15% say information on the political parties or candidates has been made available at their place of worship. This is similar to the number of voters who, following the 2008 campaign, said that political information had been provided at their place of worship (15%), but lower than the percentage who said this after the 2004 election (27%). Among religious groups, encountering political information at church is most common among black Protestants (36%).

Few regular attenders (5%) say that their clergy or other religious groups have urged them to vote in a particular way, and this does not vary significantly across religious groups. 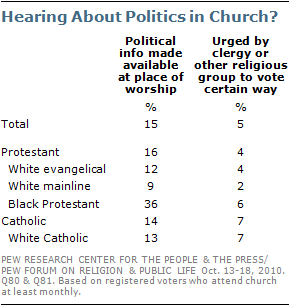