Some 21% of online adults used social networking sites such as Facebook or MySpace in the months leading up to the November, 2010 elections to connect to the campaign or the election itself, and 2% of online adults did so using Twitter. That works out to a total of 22% of adult internet users who engaged with the political campaign on Twitter or social networking sites in at least one of the following ways:

Republicans, who lagged behind Democrats in the 2008 campaign in some key aspects of social media use, caught up to Democrats in the midterm election cycle. The “political social media user” cohort represented by these 22% of internet users voted for Republican congressional candidates over Democratic candidates by a 45%-41% margin, and Republicans’ enthusiasm for using social media matched that of Democrats. Among social networking site users, 40% of Republican voters and 38% of Democratic voters used these sites to get involved politically. Further, Tea Party supporters were especially likely to friend a candidate or political group on a social networking site during the 2010 election—22% of such users did this, significantly higher than all other groups.

Compared with the rest of the online population (i.e. those who go online but did not use Twitter or social networking sites for political purposes in 2010) the “political social media” user group differs in some respects from other internet users:

A note about the charts in this report

Some of the charts in this report are interactive charts developed by iCharts. These graphics can be embedded in any blog or website, or saved as a JPG, TIFF, or other static image, by following the instructions below.

In order to embed an interactive chart into another website or blog:

2. Copy the code provided in the pop-up box.

In order to save an image of the chart to your comptuer to use in another website, blog, PowerPoint or PDF:

3. Save the image of the chart to your computer.

Three-quarters of US adults are internet users, and of these 61% use social networking sites such as Facebook or MySpace and 8% use Twitter. As Americans increasingly use these sites to connect with public figures, find out about and respond to events in the news, and share their views on a range of topics, politicians and political groups on both ends of the ideological spectrum have begun using them to organize and communicate with their supporters and the public at large. In our 2010 post-election survey, the Pew Research Center’s Internet & American Life Project set out to evaluate the current state of political engagement on Twitter and social networking sites.

The results reported here are based on a national telephone survey of 2,257 adults conducted November 3-24, 2010. The survey included 755 interviews conducted on the respondent’s cell phone, and interviews were conducted in both English and Spanish. For results based on internet users, the margin of error is +/-3 percentage points. This is the first non-presidential election in which the Pew Internet project has conducted polling on the use of social networking sites for political purposes, and the first election of any kind in which we asked detailed questions about the use of Twitter for this purpose.

Taken together, that means that 35% of all social networking site users got involved politically on these sites during the 2010 elections. That works out to 21% of all adult internet users. Half of these political social networking users took part in one of the six activities we asked about in our survey, while the other half engaged in two or more activities.

Young adults lead the way in their use of social networking sites for political reasons, but older users are active as well

Recent Pew Internet research indicates that adults over the age of 50 are one of the fastest-growing cohorts when it comes to using social networking sites,1 and in 2010 older users took to these sites in relatively large numbers to get involved in the political debate. Fully 33% of social networking site users over the age of 50 used these sites during election season to get political news, post political content, get engaged with a candidate or cause, or discover who their friends voted for—that is only slightly less than the 42% of profile owners ages 18-29 who did so. 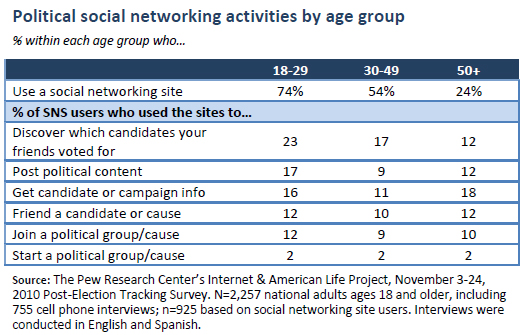 Overall, Democratic and Republican voters are equally likely to use social networking sites (among internet users, 58% of Democrats and 54% of Republicans do so). This is a notable change from the 2008 campaign, in which Obama voters were significantly more likely than McCain voters to use these sites, and reflects recent overall trends in social networking site adoption by older adults (who tend to lean Republican in their voting habits). Similarly, both supporters and detractors of the “Tea Party” movement each use these sites at roughly similar rates (54% of internet users who agree with the Tea Party movement and 60% of those who disagree with the group use these sites, a difference that is not statistically significant).

In addition to using social networking sites at similar rates, voters from both sides of the political aisle are equally likely (and more likely than non-voters) to use these sites for the purpose of engaging with the political process. Among social networking site users, 40% of Republican voters and 38% of Democratic voters used these sites to get involved politically, compared with 29% of non-voters.

The social networking activity with the biggest gap between voters (of any party) and non-voters relates to posting political content on online social networks. Among social network site users, 18% of Republican voters and 16% of Democratic voters did this, compared with 9% of those who did not vote in the 2010 elections. 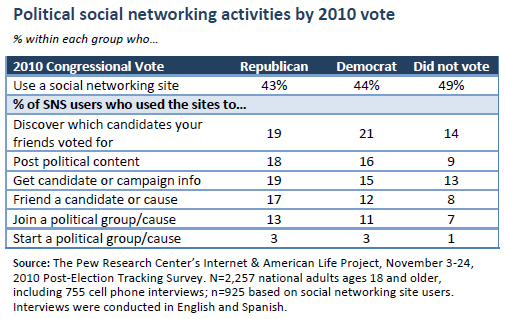 Similar splits in the use of social networking for political reasons between the politically active and the less engaged can be seen when we compare those who feel strongly one way or another about the Tea Party movement to those who either have no opinion of the movement or have not heard of it at all. Social networking site users with views (either positive or negative) about the Tea Party movement are significantly more likely than other social network users to have used these sites to take part in a range of political activities. Tea Party supporters were especially likely to friend a candidate or political group on a social networking site during the 2010 election—22% of such users did this, significantly higher than users with negative views about the tea parties, as well as those with no firm opinions either way. 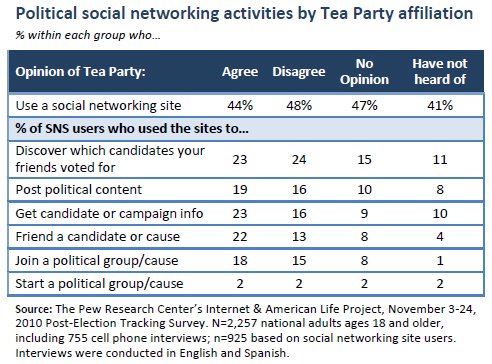 2% of online adults used Twitter for political purposes in 2010

One in ten social networking site users (11%) and a similar proportion of Twitter users (11%) followed or “friended” a candidate for office or other political group involved in the 2010 election—that works out to 7% of all internet users. In our post-election survey, we asked these “political friends and followers” a series of follow-up questions that probed more deeply on their reasons for following politicians and political groups on Twitter and social networking sites. Specifically, we presented three statements and asked whether they represented a “major reason,” a “minor reason,” or “not a reason” why they choose to follow political candidates or groups.

The main reason our survey respondents gave for following political groups on social networking sites or Twitter is that doing so helps them feel more personally connected to the candidates or groups they follow—36% said that this was a “major” reason they followed these groups or candidates, and an additional 35% said it was a “minor” reason. They responded less strongly to the statement that following these candidates helps them find out about political news before other people do—one in five (22%) said this is a “major” reason why they follow or friend political candidates or groups, with 43% saying it is a “minor” reason. Relatively few of our respondents say that they follow political groups through social media because the information is more reliable than what they can get from traditional news organizations—while 21% said that this was a “major” reason they do this, fully half (47%) said it was not a reason at all.

Generally speaking, followers of candidates or campaigns find the information posted on these sites relevant and useful. Two-thirds (67%) of those who follow politicians or other political groups on social networking sites or Twitter say that the information posted by those they follow is interesting and relevant, compared with 32% who feel that mostly uninteresting and irrelevant. Additionally, a total of two-thirds of these individuals say that they pay attention to most (26%) or some (40%) of the material posted by the politicians or groups they follow—24% say that they pay attention to only a little of it, and a one in ten (9%) say that they don’t pay attention to any of this material.