Many Americans are not convinced that members of important groups behave ethically, and they are not very confident that those who hold jobs of power and responsibility face serious consequences when caught. 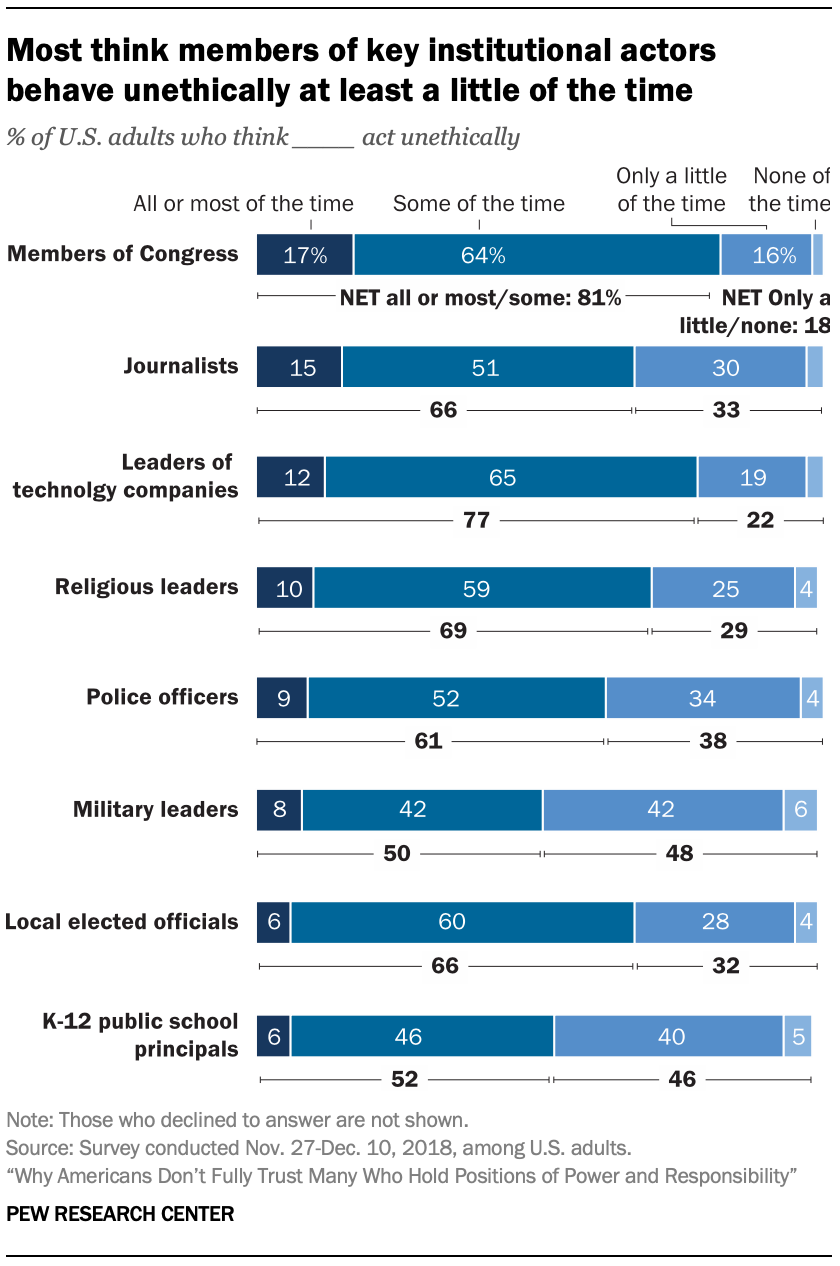 This survey tackled the issue of ethics with two questions and offered the same frequency options as other questions in the survey: “all or most of the time,” “some of the time,” “only a little of the time” or “none of the time.” The first question asked about how often members of different cohorts behave unethically. Roughly nine-in-ten adults or more say members of Congress, journalists, police officers, leaders of technology companies, local elected officials, religious leaders, public school principals and military leaders act unethically at least a little of the time. 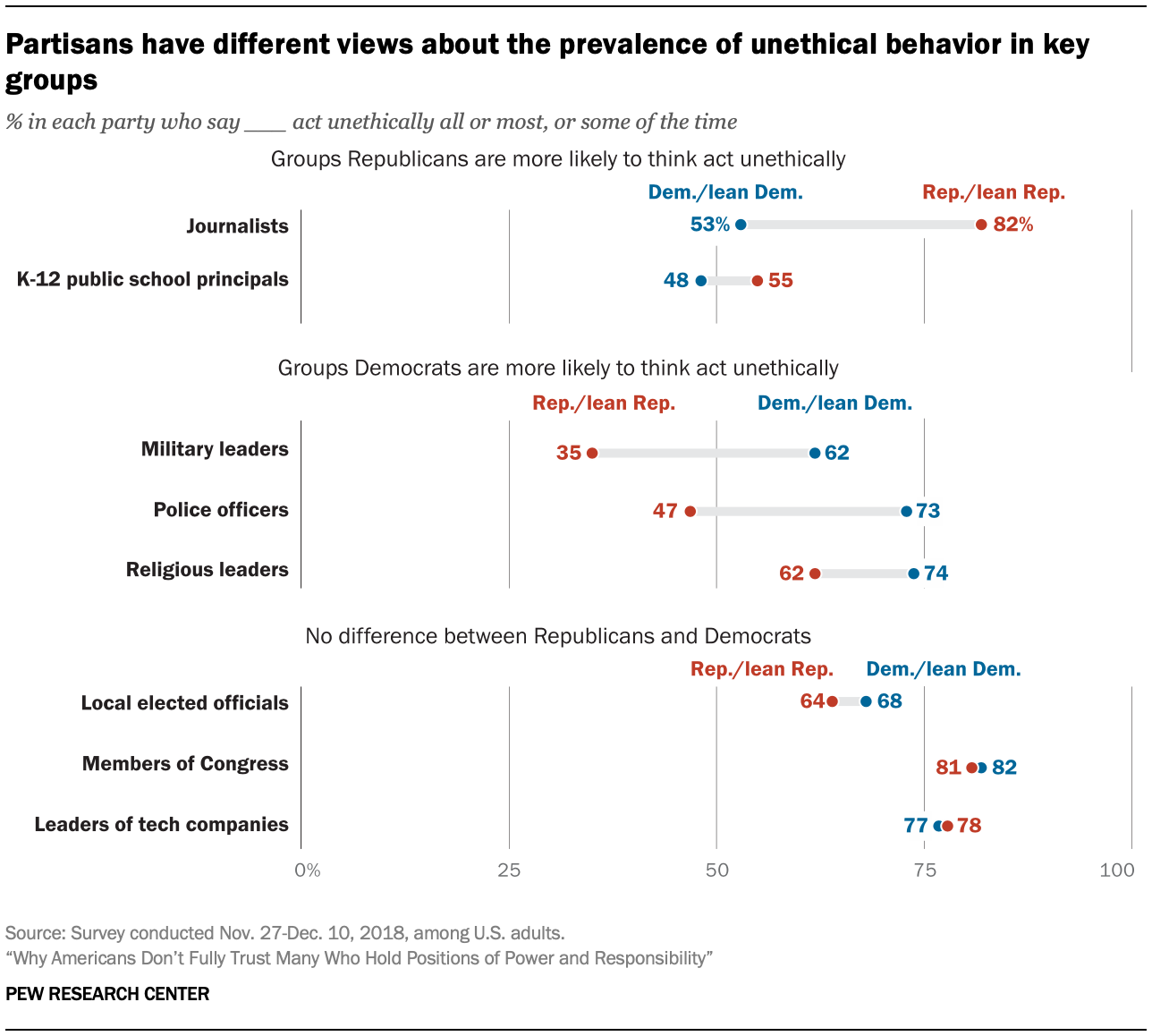 Mirroring many of the other findings in the survey, opinions about the ethical behavior of the eight groups differ by race and ethnicity and political party. Black Americans are more likely than white adults to say local elected officials, leaders of public schools, military leaders and police officers act unethically at least some of the time.

Furthermore, some of the widest gaps in views of these groups are between Republicans and Democrats (including those who lean toward each party). Partisan opinions differ for five of the eight groups asked about in the survey. Compared with Democrats, Republicans are more likely to think journalists and leaders of public schools act unethically at least some of the time. But Democrats are more likely than Republicans to say military leaders, police officers and religious leaders behave unethically.

There are no partisan differences in opinion about the ethical behavior of members of Congress, local elected officials or leaders of technology companies. 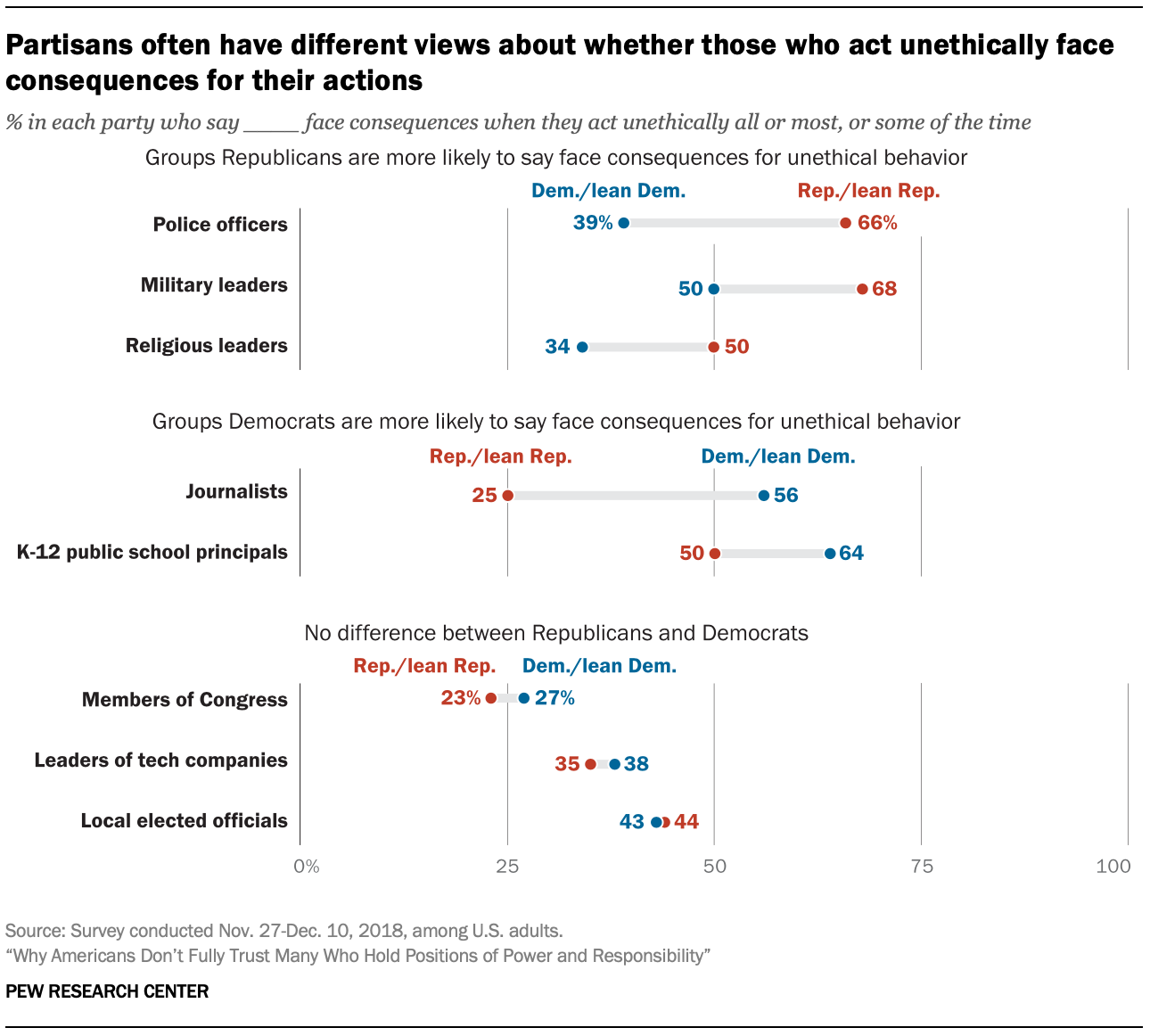 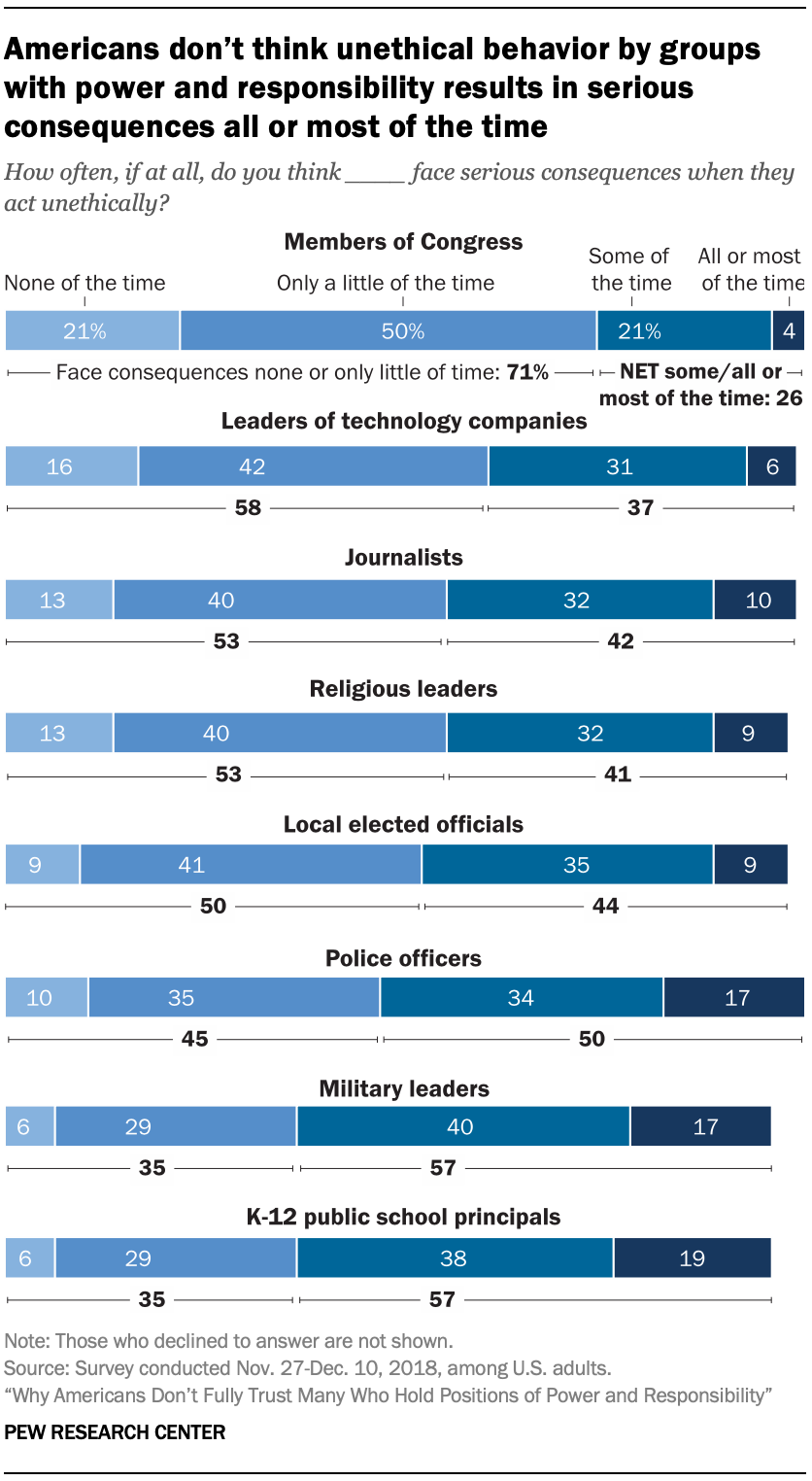 The second question dealing with this issue asked how often those who behave unethically in these major institutional groups face serious consequences for their actions. Notably, majorities of U.S. adults say members of Congress (71%) and leaders of technology companies (58%) face consequences for wrong behavior only a little or none of the time. About half believe journalists (53%), religious leaders (53%) and local elected officials (50%) face serious conse

quences when they act unethically only a little or none of the time.

Put another way, roughly one-in-five or fewer say people in these groups face serious consequences for their actions “all or most” of the time.

Other demographic differences are less clear. Although consistent with other survey findings, black people are much less likely than whites and Hispanics to say police officers face consequences for their actions “all or most” or “some of the time” (31% of black people say this vs. 56% among whites and 49% among Hispanics).

Personal trust is connected to people’s assessments of unethical behavior

A previous report on the state of personal trust in the U.S. divided American adults into three categories – high trusters, medium trusters and low trusters – based on their responses to questions about people’s general trust or distrust in others, their sense of the exploitative tendencies or fairness of others, and their assessment of the overall helpfulness or selfishness of others.5 In general, the opinions of those in the three trust categories about the frequency of ethical behavior among those in positions of power and responsibility mirror the opinions of the public as a whole. But those with the lowest level of trust are more likely than those with high levels of trust to say each of the groups asked about in the survey acts unethically at least some of the time. Two exceptions are religious leaders and leaders of tech companies – there are no differences in opinion among high, medium and low trusters for these groups. 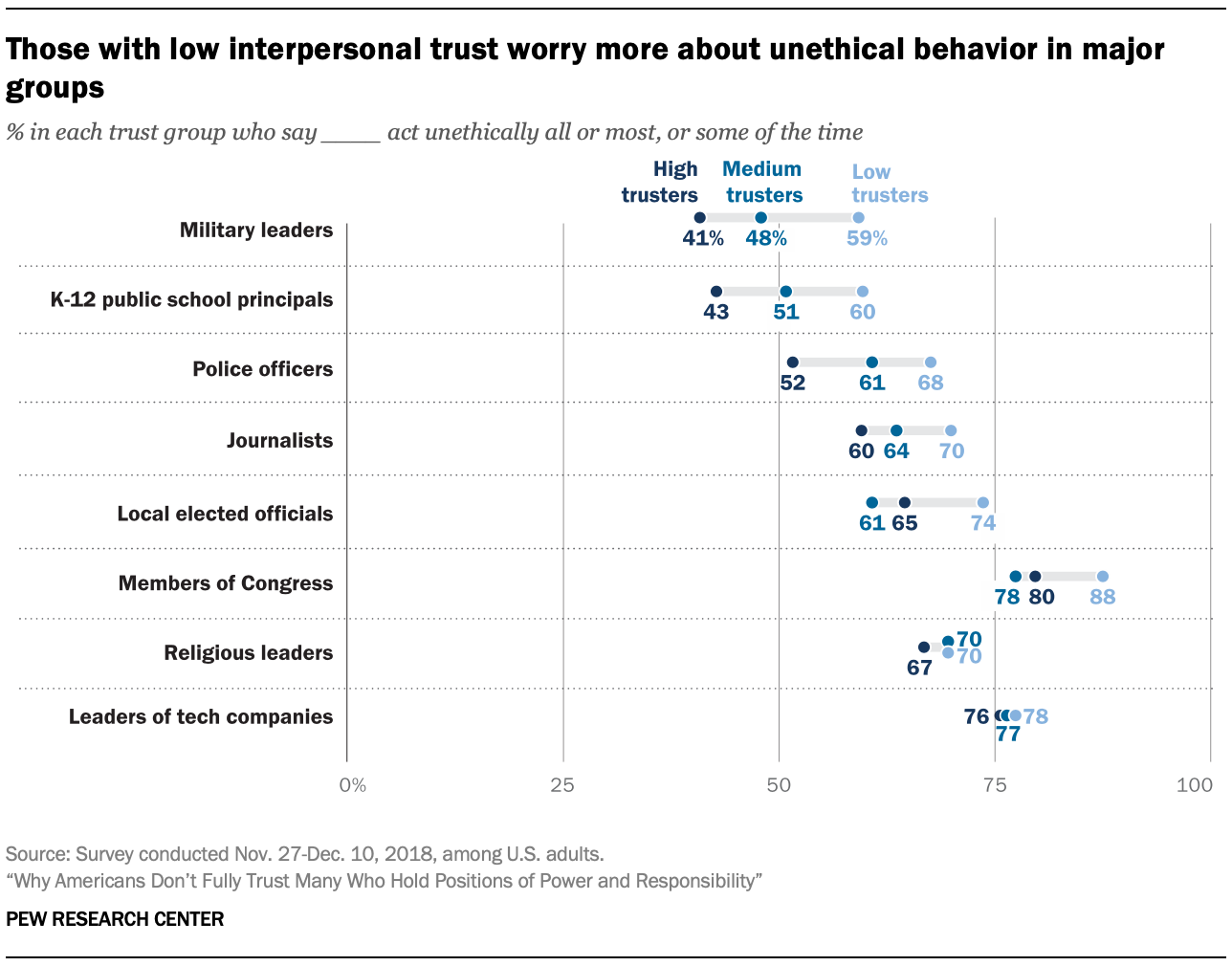 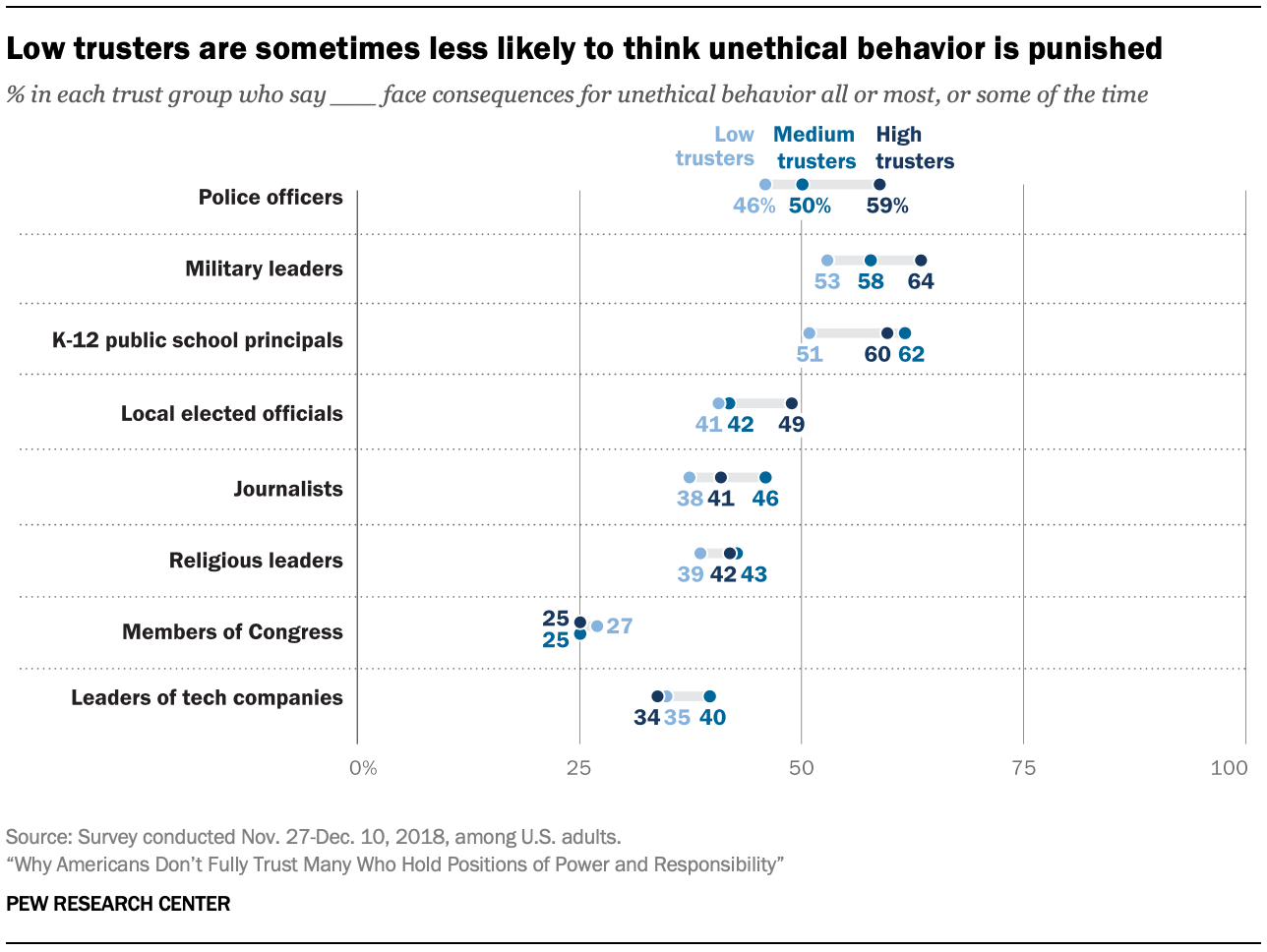