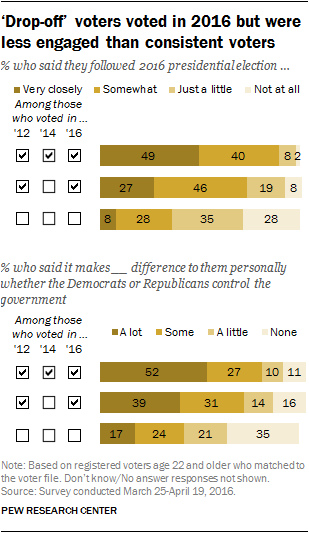 The 2018 midterm elections will be determined in large part by who goes to the polls and who stays home. Historically, far fewer Americans turn out to vote in midterm than presidential elections and in 2014, turnout hit a 70-year low.

A new Pew Research Center analysis finds that “drop-off” voters – those who voted in the 2012 and 2016 presidential elections but not the 2014 midterm, differed in many ways from consistent voters, who voted in all three of these elections, and nonvoters. In this report, nonvoters are those who were registered to vote, but did not cast ballots in any of the most recent national elections.

To understand these differences, this study combines people’s voting histories (from a national voter file, recently updated to include vote history from the 2016 election) with their attitudes about politics and civic engagement, based on a nationally representative survey conducted in the spring of last year.

Even in 2016, a presidential election year when these midterm “drop-off” voters turned out and cast ballots, they were considerably less engaged than 2016 voters who had also voted in the 2014 midterm. 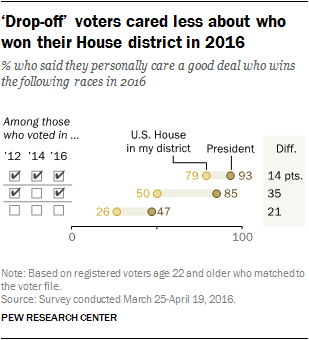 By contrast, overwhelming majorities of consistent voters said both elections mattered a good deal: 93% said that about the presidential election, while 79% said they personally cared a good deal about who won local House election. 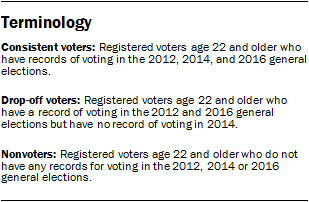 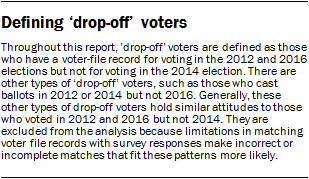 And among members of both parties, consistent voters were much more likely than drop-off voters or nonvoters to say that their household’s financial situation enabled them to “live comfortably.”

This analysis is based on a nationwide survey conducted online among 3,763 adults March 25-April 19, 2016. Of the total sample, it was possible to match the voting records of 3,309 registered voters from voter file records compiled by TargetSmart. This analysis is further restricted to the 2,758 registered voters 22 and older in 2016 (those old enough to have been eligible to vote in 2012). For further details about the survey and the match to the voter file, see the methodology.

What is a voter file?

A voter file is a compilation of data gathered from publicly available voter lists from each state and standardized by a vendor, containing information on turnout history. The voter file does not indicate the candidates for whom a person voted, only whether they have a record of having voted in that election.

Matching the voter file to our survey data allows us to incorporate past turnout history by validating whether panel respondents were recorded as having cast a ballot in the 2012, 2014 or 2016 elections. This validation is an improvement on survey-based estimates of turnout because respondents often have difficulty accurately reporting their participation at the polls. However, it is also true that a known error is introduced when using the voter file. While the presence of a record of voting almost certainly means that a person voted, the absence of a record does not necessarily mean that the person did not vote. 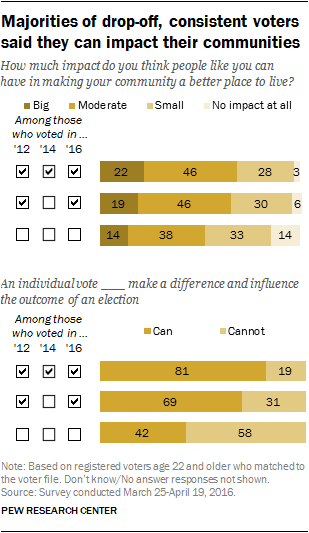 Despite being less interested in politics, drop-off voters were about as likely as consistent voters to say that people like them are able to improve their local communities, and most drop-off voters said an individual’s vote matters. In this sense, they stand out clearly from nonvoters.

About two-thirds of consistent (68%) and drop-off voters (64%) said people like them could have a big or moderate impact in making their community a better place to live. Only about half of nonvoters (53%) say the same.

When it comes to opinions about the actions associated with good citizenship, drop-off voters and consistent voters had some common ground – but largely in non-political realms. 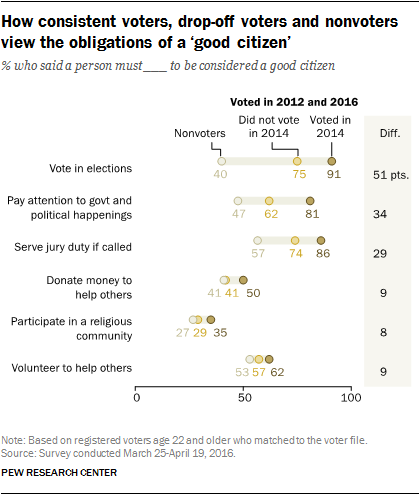 For instance, comparable shares of drop-off voters (57%) and consistent voters (62%) said a person must volunteer to help others to be considered a good citizen. There also were only modest gaps on the importance of charitable giving and participation in a religious community.

Nonvoters were much less likely to say that voting (40%) is essential to be considered a good citizen. Compared to voters, fewer also said that paying attention to politics (47%) and serving jury duty if called (57%) were essential to citizenship. Their views were not much different than those of voters on whether donating money (41%), participating in a religious community (27%) and volunteering are important elements of citizenship (53%). 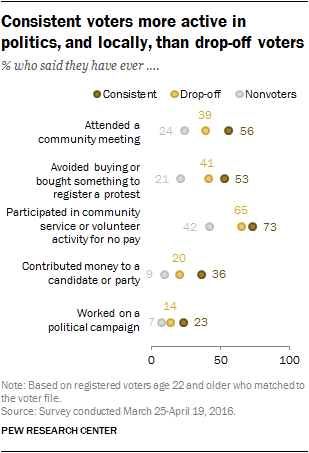 On every measure, registered nonvoters were less likely to report engaging in any form of political activity than both consistent and drop-off voters. At their most engaged, about 4-in-10 said they had volunteered for community service (42%). Just 9% said they had contributed money and 7% reported they had worked on a political campaign. 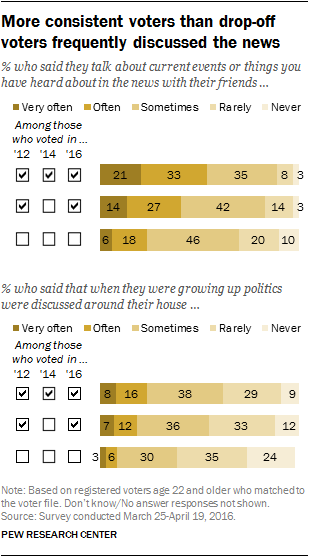 Among 2016 voters, those who missed the 2014 midterm election reported having fewer conversations with their friends about current events compared with consistent voters.

More than half (54%) of consistent voters said they talk about current events or things they have heard about in the news with their friends often or very often; 41% of drop-off voters said the same. 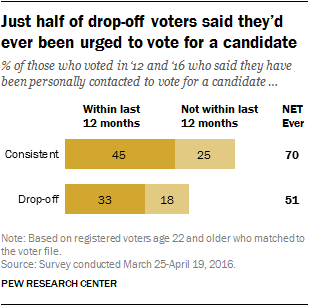 Some of this gap may be a result of voters in more competitive states and districts in 2014 being more likely to be contacted and to turn out to vote. Nevertheless, consistent voters were more likely to report being contacted even during the 12 months prior to this survey (45% vs. 33%).

Knowledge about government and politics 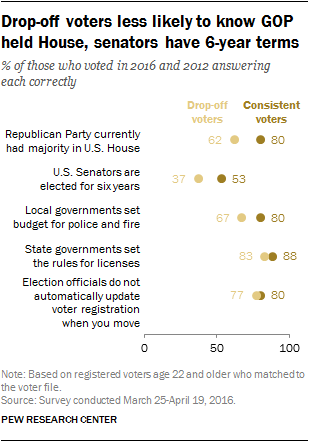 Drop-off voters were about as likely as consistent voters to know some basic facts about government and voting registration: 83% knew that state governments (not local governments or the federal government) set rules for driver and occupational licenses and 77% knew that election officials do not automatically update a person’s voter registration when they move.

Comparable shares of consistent voters answered these questions correctly: 88% knew that state governments set rules for licenses and 80% knew that voter registration is not automatically updated by election officials.

But there were wide gaps in knowledge about Congress. While 80% of consistent voters knew that Republicans had a majority in the House, fewer drop-off voters (62%) knew this. Both groups of voters struggled with a question on the length of terms for senators, but drop-off voters were less likely than consistent voters to know that senators are elected for six years (37% vs. 53%).

nonvoters were generally less knowledgeable about politics than consistent and drop-off voters. About half (47%) knew Republicans had the majority in the U.S. House and just 24% correctly identified the length of a U.S. Senator’s term. nonvoters were almost as knowledgeable as drop-off voters and consistent voters about day-to-day government issues regarding drivers’ and occupational licenses (77%).

By contrast, Democrats and Democratic leaners made up much greater shares of drop-off voters (58%) and nonvoters (58%) than consistent voters (47%). 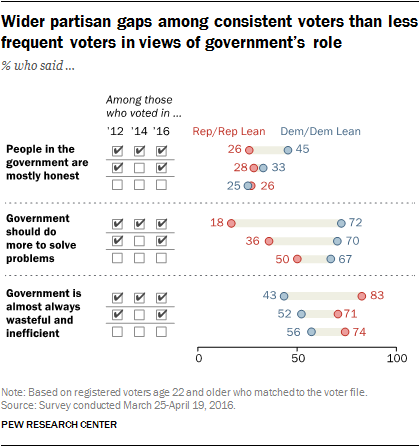 Democrats, regardless of their voting frequency, generally agreed that government should do more to solve problems. However, Democrats who did not vote in 2014 (but voted in 2012 and 2016) were more likely than those who voted in all three elections to express skepticism about government workers: Just 33% of drop-off Democratic voters said people in the government were mostly honest, compared with 45% of consistent Democratic voters.

Previous Pew Research analyses, such as this report in 2014, have found wide differences in financial stress between likely voters and nonvoters (those who said they were not registered or indicated they were not likely to vote).

These differences also are evident when looking at consistent and less frequent voters, based on their voting records. 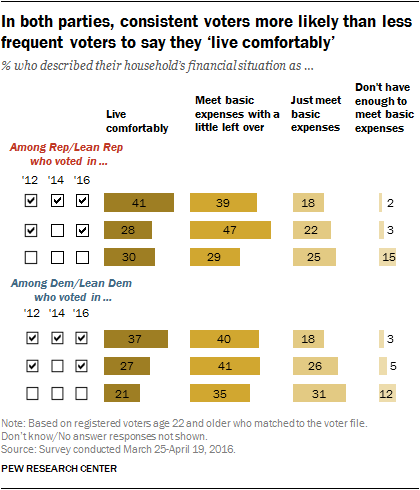 Consistent voters were more likely to describe their financial situation favorably than those who skipped the 2014 election or did not vote in any of the past three elections, and these differences hold within parties.