With just four days before the midterm elections, the spotlight understandably is focused on the estimated 40% of voting age adults who are expected to show up at the polls next Tuesday. There has been less attention on the much larger share who most probably will not.

As in past elections, nonvoters 1 – those who are either not registered to vote or are considered unlikely to vote in the upcoming midterms – are very different demographically from likely voters: 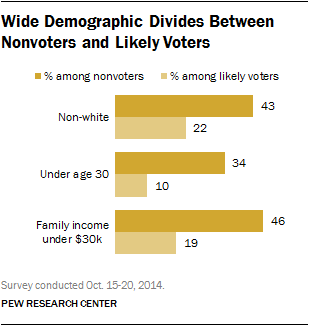 They’re more racially and ethnically diverse. Fully 43% of those who are not likely to cast ballots Tuesday are Hispanic, African American or other racial and ethnic minorities, roughly double the percentage among likely voters (22%).

They’re less affluent and less educated. Nearly half of nonvoters (46%) have family incomes less than $30,000, compared with 19% of likely voters. Most nonvoters (54%) have not attended college; 72% of likely voters have completed at least some college.

These demographic differences are not new; similar gaps were seen between the likely electorate and nonvoters in 2012 and 2010. Yet this new analysis, based on an October national telephone survey by the Pew Research Center for the People & the Press and a September wave of the American Trends Panel, underscores the vast gulf in financial well-being between voters and nonvoters. 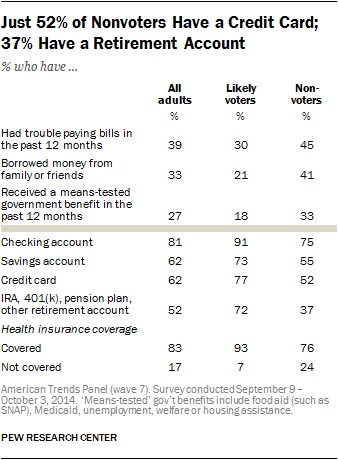 Fully 45% of nonvoters say they have had trouble paying bills in the past year, compared with 30% of likely voters. Nonvoters are also much more likely than voters to borrow money from family or friends (41% vs. 21%) and to receive a means-tested government benefit (33% vs. 18%). 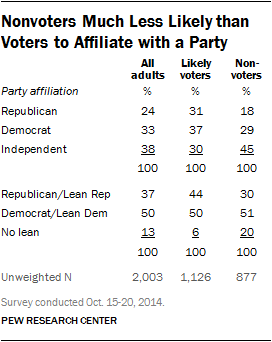 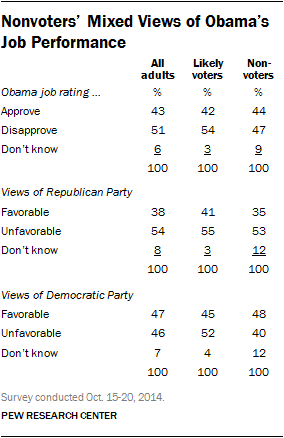 Nonvoters do not have particularly positive views of President Obama’s job performance, or of either political party. About as many approve (44%) as disapprove of the way Obama is handling his job as president.

Nonvoters’ views of the Democratic Party are more favorable than unfavorable. Still, only about half (48%) view the party favorably, while 40% have an unfavorable impression. Among likely voters, both parties are viewed negatively, on balance.

Skepticism about government performance is nearly as strong among nonvoters as it is among likely voters. Voters and nonvoters are about equally likely to say government is almost always wasteful and inefficient (60% among voters, 54% among nonvoters). On the specific issue of the 2010 health care law, 42% of voters approve, while just over half (54%) disapprove. Even though nonvoters are more likely to be uninsured, and thus to be eligible for the law’s benefits, they too are divided on its merits: 44% say they approve of the law, 49% disapprove.

Demographics of Nonvoters: A Deeper Look

Low education levels and low incomes go hand-in-hand: 46% of nonvoters have family incomes under $30,000, compared with just 19% among likely voters.

Fewer nonvoters than voters are affiliated with a religion. Among voters, 21% identify as atheist, agnostic, or “nothing in particular”; among nonvoters, it’s 27%.