In the final days before Tuesday’s election, most of the focus will be on those likely to cast votes. But a sizable minority of adults choose not to vote or are unable to vote. By their absence, they also will 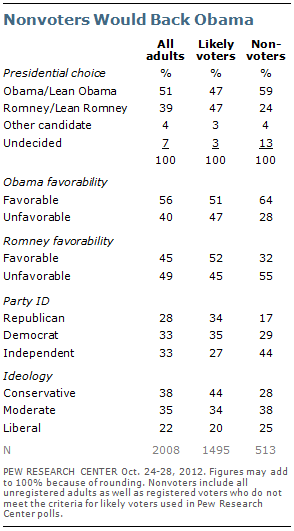 affect the outcome. Nonvoters are numerous; in 2008, they constituted about 43% of the voting age population.

Nonvoters favor Barack Obama over Mitt Romney by a wide margin (59% to 24%). While most nonvoters (64%) have a favorable view of Obama, just half as many (32%) view Romney favorably.

About half of nonvoters (52%) either identify as Democrats or lean Democratic; only 27% identify as Republicans or lean Republican. Likely voters’ leaned party identification is evenly divided: 47% identify with the Republican Party or lean toward the GOP, while the same percentage identify as Democrats or lean Democratic.
However, just a quarter of nonvoters describe their political views as liberal; that is little different from the percentage of liberals among likely voters (20%). But nonvoters are far less likely than voters to describe their political views as conservative (28% vs. 44% of likely voters).

As might be expected, nonvoters express very little interest in politics or the election. A third of nonvoters say they are registered to vote. But they are far less likely than voters to give a lot of thought to the election and follow public affairs. 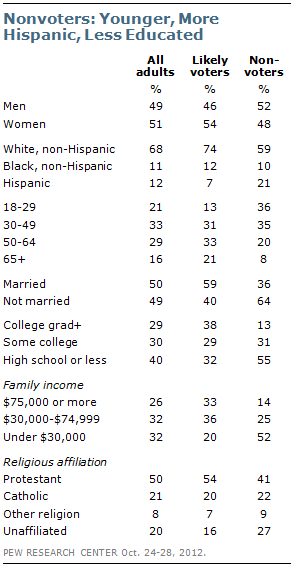 Nonvoters and Voters on the Issues

Nonvoters express more liberal opinions than voters on a wide range of domestic and foreign policy issues. But the differences are far less pronounced on social issues, such as gay marriage and abortion.

On foreign policy, a clear majority of likely voters (56%) favor withdrawing U.S. forces from Afghanistan as soon as possible; 40% say they should remain until the situation there is stabilized. Support for an immediate withdrawal is even more widespread among nonvoters (67% favor). 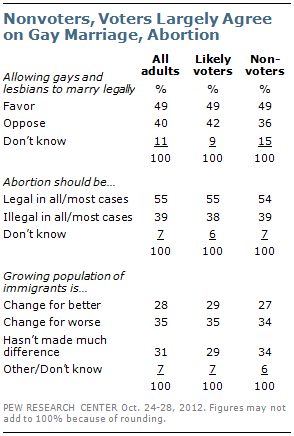 On gay marriage and abortion, however, there are at most modest differences between nonvoters and likely voters. And there are no significant differences in opinions about the impact of immigrants on the country.

Identical percentages of nonvoters and likely voters favor allowing gays and lesbians to marry legally (49% each). Somewhat fewer nonvoters oppose gay marriage (36% vs. 42% of voters ), while more have no opinion (15% vs. 9%).

Nonvoters: Who They Are, What They Think
OverviewDemographic Differences Between Voters, NonvotersNonvoters and Voters on the Issues
About the Surveys