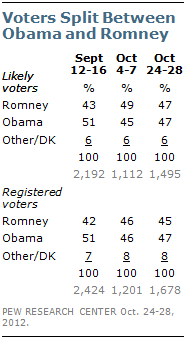 As the presidential campaign enters its final week, Barack Obama has failed to regain much of the support he lost in the days following the first presidential debate and the race is now even among likely voters: 47% favor Obama while an identical percentage supports Mitt Romney.

The latest national survey by the Pew Research Center for the People & the Press, conducted Oct. 24-28 among 1,678 registered voters, including 1,495 likely voters, finds Obama holding a statistically insignificant two-point edge among registered voters: 47% to 45%. This is little different from the 46% to 46% standoff among registered voters observed in early October, in the days following the first debate.

When the sample is narrowed to likely voters, the balance of opinion shifts slightly in Romney’s direction, as it did in early October. This reflects Romney’s turnout advantage over Obama, which could loom larger as Election Day approaches. In both October surveys, more Republicans and Republican leaners than Democrats and Democratic leaners are predicted to be likely voters. In September, the gap was more modest.

Indeed, surveys over the past month have found Republicans becoming much more upbeat about the 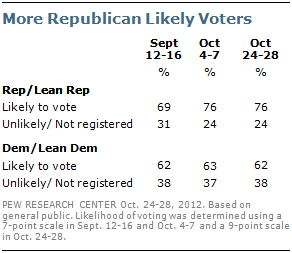 race and about Mitt Romney himself. More Republicans now see the campaign as interesting and informative. And compared with September, a greater proportion of Romney voters now say they are voting for him rather than against Obama.

The deadlock in candidate support continues to reflect the offsetting strengths and weaknesses of the two candidates. Romney’s personal image has improved substantially since the summer, and his favorability rating among registered voters (50%) is now about the same as Obama’s (52%).

Obama also leads Romney by nine points on better representing voters’ views on abortion and by about the same margin (50% to 42%) on making wise decisions about foreign policy.

Moreover, majorities of voters continue to agree with criticisms frequently lodged against Romney. About six-in-ten (61%) agree that Romney is “promising more than he can deliver” while 53% say “it’s hard to know what Romney really stands for.” Both percentages are virtually unchanged since early October. 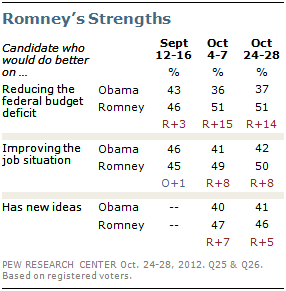 Romney’s strengths – and Obama’s weaknesses – continue to be the economy and the budget deficit. More see the former Massachusetts governor as better able to improve the job situation, by a 50% to 42% margin. Half of voters agree that “Obama doesn’t know how to turn the economy around.” And more voters say Romney has new ideas than say that about Obama (46% vs. 41%).

The poll finds that this year’s debates collectively have had a much more positive impact on opinions of Romney than on views of Obama. Twice as many voters say they have a better opinion of Romney as a result of the debates than say that about Obama (36% vs. 18%). 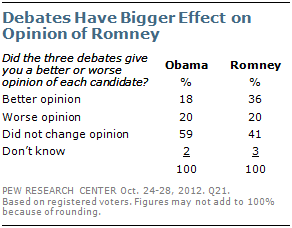 And Romney continues to run about even with Obama on a number of issues on which he trailed earlier in the campaign, including health care and energy. Similarly, voters are divided over whether Obama (46%) or Romney (44%) would do better in dealing with taxes.

Overall, the poll shows a modest gender gap. Men lean to Romney by a seven-point margin, women lean to Obama by about the same margin (six points). The marital gap is much wider. Both married men and women favor Romney, while 59% of unmarried women – and 56% of unmarried men – support Obama.

The swing vote has not decreased significantly since early October. Among likely voters, 13% are either undecided, lean toward a candidate or support Romney or Obama but say they could still change their mind. In early October, 14% were swing voters.

With voter preferences split evenly between Obama and Romney among likely voters, support for Barack Obama is substantially lower than it was in the election four years ago, according to national exit polls.

But Obama has held his ground among some voting blocs over this time period. Notably, he runs about as well among middle-aged voters (30-64) and those with high incomes as he did four years ago, and he continues to garner near universal support from blacks. His support among Democrats is slightly higher than in 2008.

Obama has lost ground since 2008 among young voters as well as those 65 and older. His support has also slipped among voters in the middle and lower-income brackets. Most notably, while Obama won independent voters by an eight-point margin in 2008, he now trails Romney by an identical margin among independents. 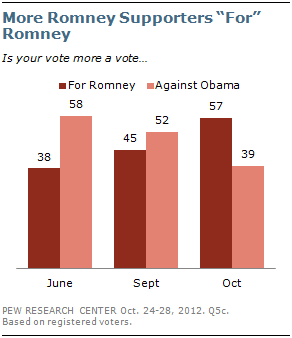 For the first time this year, a majority of registered voters who support Romney (57%) now think of their vote as a vote for Mitt Romney, not as a vote against Barack Obama. As recently as September, just over half of Romney voters (52%) said their main motivation was their opposition to Obama. 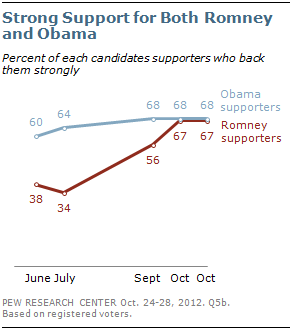 Consistent with this, as many Romney as Obama voters express strong support for their candidate. This continues the pattern seen in the Pew Research poll in early October, after the first presidential debate, which represented a shift from polling earlier in the year when Romney’s support was much more tepid. 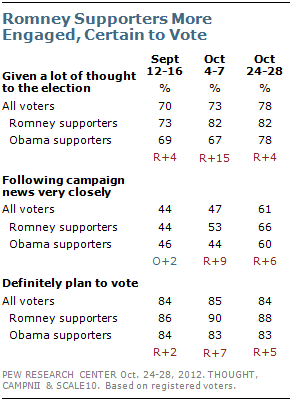 Obama’s supporters report greater engagement now than they did earlier this month, just after the first presidential debate. The percentage who report giving a lot of thought to the election rose from 67% to 78%, and 60% now say they are following the campaign very closely, compared with 44% earlier in the month. 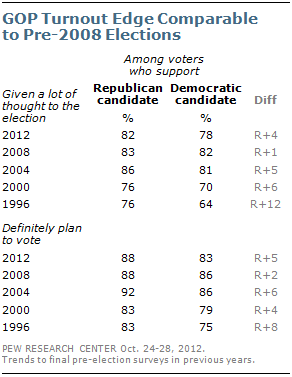 While turnout forecasts are very difficult, the level of engagement at this point in the campaign suggests that a relatively high percentage of voters will go to the polls. Compared with final pre-election polls in four previous elections, the percentage giving a lot of thought to the election is higher than in 2000 and 1996, and only slightly lower than in 2008 and 2004 – both high turnout elections. Similarly, the percentage saying they definitely plan to vote is 84%, not significantly different from the figures in 2008 and 2004. 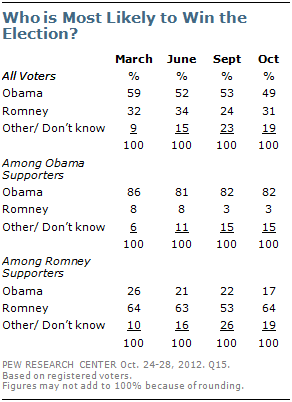 Overall, more voters continue to expect Barack Obama to win the election (49%) than think Romney will win (31%). This reflects the continued confidence of Obama’s supporters – throughout the year at least eight-in-ten Obama backers have said they expect him to win. Romney supporters, by comparison, are less uniformly confident. Currently 64% of Romney voters say they believe Romney will win, while 17% think Obama will win and 19% are not sure.

But Romney backers are more confident now than they were in September, when their candidate trailed in most national polling. 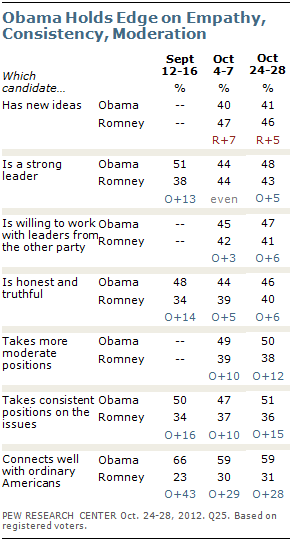 Since the aftermath of the first presidential debate, there has been little change in perceptions about the personal qualities of the two presidential candidates. Obama continues to hold a lead over Romney on empathy (by a 59%-31% margin, voters say he is the candidate who is better able to connect with ordinary Americans), and on taking consistent positions on issues (51%-36%). He also has a modest advantage on the question of which candidate takes more moderate positions (50%-38%).

But on questions of honesty, working with leaders of the other party, strength of leadership and coming up with new ideas, the candidates are evenly matched. Despite the fact that Obama was perceived as the candidate of change in 2008, 46% now say Romney is the candidate with new ideas; 41% say this better describes Obama. However, Obama has a comparably small edge on honesty, on being a strong leader and on working across the aisle.

The public is closely divided in its evaluations of which candidate can better handle the key issues facing the country. Romney holds an advantage on reducing the deficit (51%-37%) and a smaller edge on improving the job situation (50%-42%). 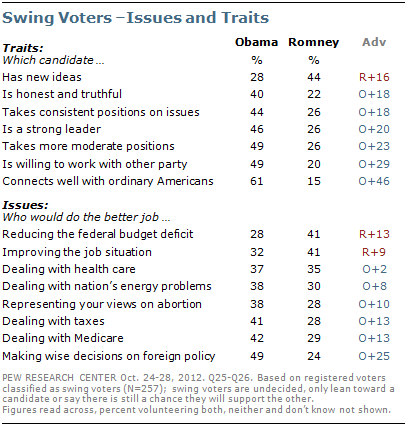 Since much of the electorate has already made up its mind – not to mention having possibly voted – attention turns to the swing voters, including those who are undecided or have a weak commitment to their candidate.

Swing voters in the current poll favor Mitt Romney on the critical issue of improving the job situation (41% Romney, 32% Obama) and also on the deficit (41% Romney, 28% Obama). More swing voters also view Romney as the candidate of new ideas (44% Romney, 28% Obama). But Obama matches or surpasses Romney on every other issue and candidate trait, including empathy, honesty, consistency, strength of leadership, moderation and willingness to work across party lines. 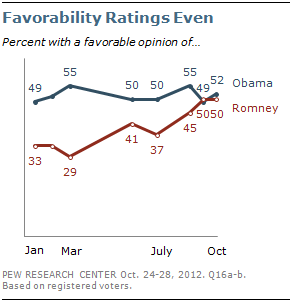 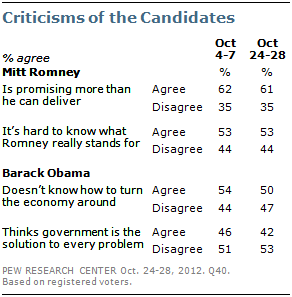 Looking at frequent criticisms of the presidential candidates, 61% of voters agree that Romney “is promising more than he can deliver,” while 35% disagree. Just more than half (53%) agree that “it’s hard to know what Romney really stands for”; 44% disagree.