The public continues to hold negative views of Congress. Today, about six-in-ten (62%) say they have a very (24%) or mostly (38%) unfavorable opinion of Congress, compared with about a third (34%) who give a favorable rating.

Majorities of Republicans and Democrats alike have given Congress poor ratings in recent years, but the views among Republicans have grown more positive over the last year, following Trump’s election. Overall, 44% of Republicans and Republicans leaners have a favorable opinion of Congress, up from 31% last June.

By contrast, only about a quarter (27%) of Democrats and Democratic leaners express a positive view of Congress – down slightly from 32% last June — while 69% say they have an unfavorable view.

A year and a half into his tenure as House Speaker, Paul Ryan is viewed more negatively than positively: 54% say they disapprove of the job Ryan is doing, 29% approve; 17% do not have an opinion. 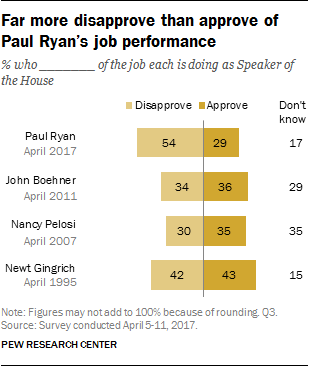 Ryan’s approval rating of 29% is lower than the approval ratings for John Boehner (36%), Nancy Pelosi (35%) and Newt Gingrich (43%), measured shortly after each of their terms as Speaker of the House began. 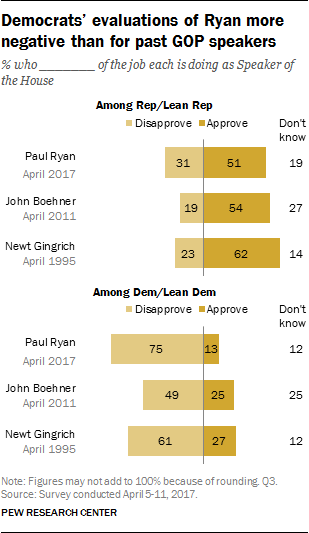 And while Democrats have consistently rated a Republican Speaker of the House more negatively than positively, attitudes toward Ryan are overwhelmingly negative. Fully three-quarters of Democrats disapprove of Ryan’s performance today; about half of Democrats said this of Boehner in 2011 (49%) and about six-in-ten (61%) disapproved of Gingrich in 1995.

About half of Americans (53%) say that the Trump administration is doing too little to work with congressional Democrats; just 7% say it has done too much, while 36% say the administration is doing about the right amount. And overall public views about how congressional Democrats are working with the Trump administration are nearly identical: 57% say they are doing too little to work with the Trump White House, only 5% say they are doing too much; 34% think they have done about the right amount. 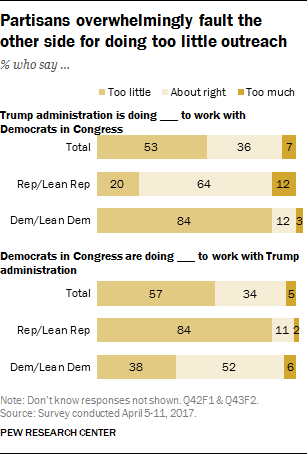 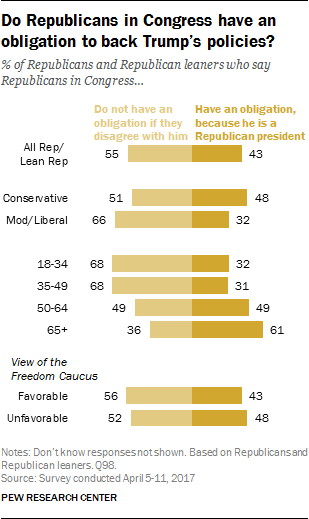 About four-in-ten Republicans and Republican leaners (43%) say that Republicans in Congress have an obligation to support Donald Trump’s politics and programs because he is a Republican president, while a narrow majority (55%) say they do not have such an obligation if they disagree with him.

Conservative Republicans are roughly evenly divided on this question. However, by roughly two-to-one (66% vs. 32%), more moderate and liberal Republicans say GOP members of Congress do not have an obligation to back Trump if they disagree with him.

Views of whether GOP representatives have an obligation to back Trump are not associated with opinion about the House Freedom Caucus.

Views of the Freedom Caucus

Despite its high-profile role in unsuccessful efforts to repeal and replace the Affordable Care Act, many Americans say they have not heard about the Freedom Caucus, a group of conservative Republicans in the House of Representatives. 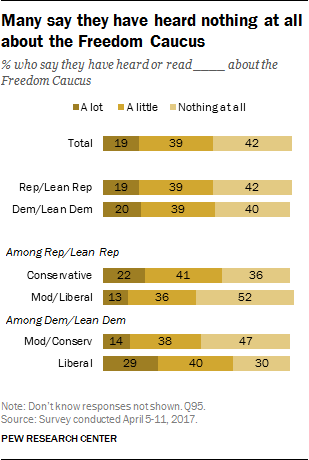 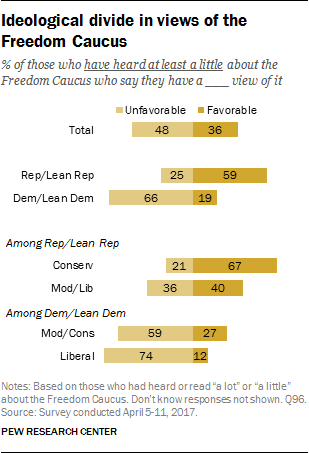 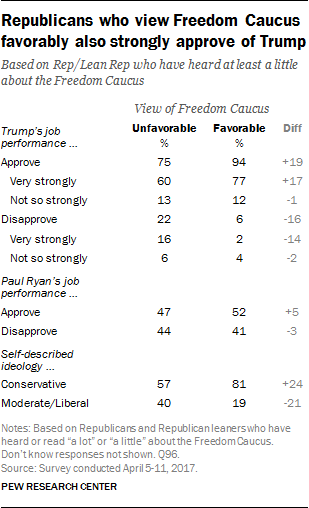 Republicans who have a favorable view of the Freedom Caucus are more likely than those with an unfavorable view to describe their own political views as conservative (81% vs. 57%). (Conservative Republicans express more widespread and intense approval of Trump than do moderate and liberal Republicans).

Views of Speaker Paul Ryan are not significantly different between Republicans who view the Freedom Caucus favorably and those who view it unfavorably.

Public Dissatisfaction With Washington Weighs on the GOP 1. Views of Trump 2. Views of the parties
3. Views of Congress
Many say Trump and Hill Democrats are doing too little to work with oppositionMost Republicans say GOP lawmakers are not obliged to back Trump if they disagree with himViews of the Freedom Caucus
Methodology