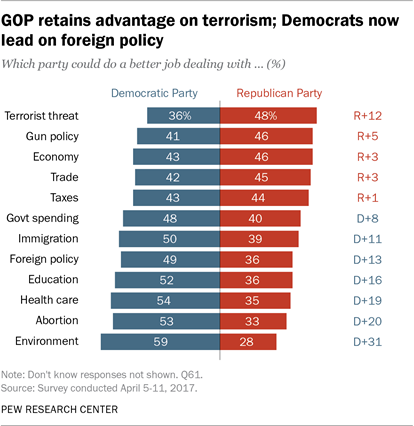 Nearly three months after the Republican Party took control of the White House and Congress, the public gives low job ratings to the president and even lower ratings to the speaker of the House.

The new Congress is viewed about as unfavorably as the previous Congress. And while both parties are viewed less positively than in January, the GOP’s ratings are more negative than the Democratic Party’s.

On issues, the Republicans hold their traditional advantage on terrorism, and the two parties continue to run about even on handling the economy – which, along with terrorism, tops the public’s agenda.

And, with budget debates looming this month in Congress, 48% say the Democratic Party better represents their views on government spending, while 40% say the Republican Party does.

The national survey by Pew Research Center, conducted April 5-11 among 1,501 adults, finds some signs of public disillusionment with both parties. The favorability ratings of both parties have declined since January – seven percentage points for the Republican Party (from 47% to 40%) and six points for the Democratic Party (51% to 45%).

However, with the Republicans now in control of government, much of the public’s criticism is aimed toward the GOP and its leaders: 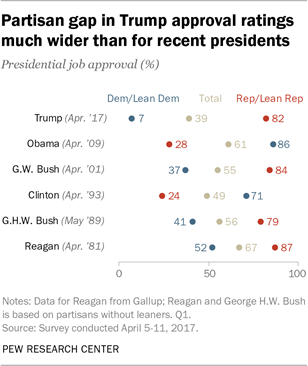 Less confidence in Trump in dealing with Congress. Donald Trump’s overall job rating stands at 39%, the same as it was in February. As was the case then, his job rating today is lower – and more politically divided – than other recent presidents at comparable points in their first year. For more, see detailed demographic tables on Trump job approval.

In addition, fewer than half (46%) are very or somewhat confident in Trump’s ability to work effectively with Congress; in December, this had been seen as a relative strength for Trump – 60% were confident he could work well with Congress. Over this period, the share expressing confidence in Trump to avoid major scandals in his administration also has fallen eight percentage points, from 44% to 36%.

Ryan’s negative job rating. Just 29% approve of the way Paul Ryan is handling his job as speaker of the House, while nearly twice as many (54%) disapprove. About half of Republicans and Republican-leaning independents (51%) give Ryan a positive job rating, while 31% disapprove. Democrats and Democratic leaners overwhelmingly disapprove of Ryan’s job performance (75% disapprove). 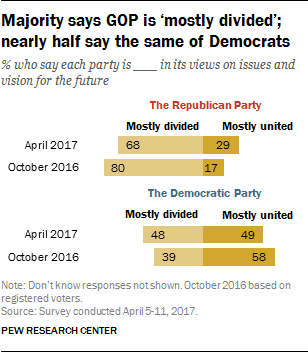 By contrast, about as many say the Democratic Party is divided as not (48% mostly divided, 49% mostly united). But that represents a change from October, when 39% of registered voters thought the party was divided.

In the current survey, 57% of Republicans see their party as mostly divided, while a similar majority of Democrats (58%) say their party is mostly united.

Next: 1. Views of Trump
← Prev Page
You are reading page1Page2Page3Page4Page5
Next Page →

Public Dissatisfaction With Washington Weighs on the GOP
Survey Report
1. Views of Trump 2. Views of the parties 3. Views of Congress Methodology