Public views of the Supreme Court are little changed since last summer, following the court’s ruling in the Hobby Lobby case and other end-of-term decisions. Currently, half of Americans (50%) have a favorable opinion of the Supreme Court, while 39% say they have an unfavorable view. 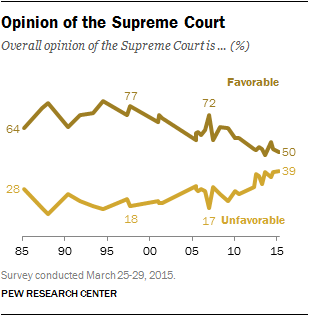 The court’s upcoming decisions, on such contentious subjects as same-sex marriage, the death penalty and the Affordable Care Act, have the potential to affect opinions of the court. The court will hear arguments April 28 in cases to overturn state bans on same-sex marriage.

The latest national survey by the Pew Research Center, conducted March 25-29, 2015 among 1,500 adults, finds no significant partisan differences in views of the court: 54% of Democrats and 50% of Republicans view the Supreme Court favorably. 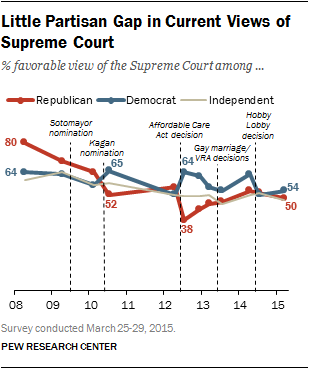 In recent years, partisan views of the court shifted following major, end-of-term decisions. In 2012, the share of Republicans viewing the court favorably declined 18 points (from 56% to 38%), after the court’s ruling upholding most parts of the Affordable Care Act; by contrast, favorable opinions among Democrats rose 12 points (from 52% to 64%).

Last year, after the Hobby Lobby ruling limiting the Affordable Care Act’s requirement to provide contraceptive coverage, there was an 11-point decline in the percentage of Democrats viewing the court favorably (63% to 52%). Republicans’ views were largely unchanged (54% before, 53% after).

Over the long term, the public’s views of the Supreme Court have become less positive. In seven of the last eight surveys since April 2012, favorable impressions of the court have been close to 50%, the lowest ratings in 30 years of polling. 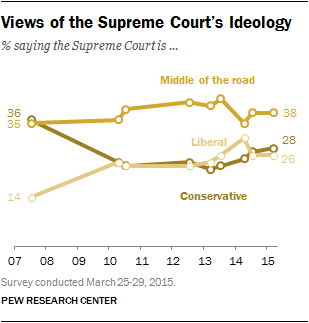 The survey finds that the public continues to have a mixed view of the Supreme Court’s ideology, with a plurality (38%) continuing to say they perceive the court to be “middle of the road.” About as many call the Supreme Court liberal (26%) as say it is conservative (28%). This balance of opinion regarding the court’s ideological leanings is virtually unchanged since last measured in July 2014. 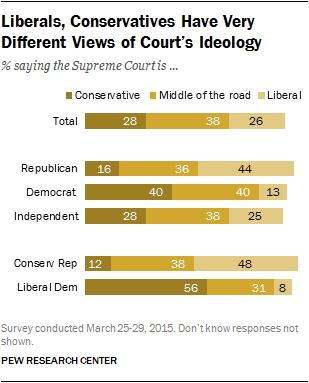