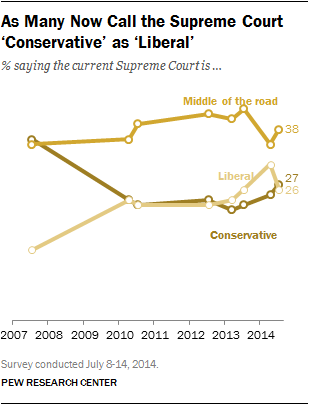 Overall views of the U.S. Supreme Court – and its ideology – have changed only modestly since last measured in April before the court’s end-of-term decisions, including the Hobby Lobby ruling that limits the Affordable Care Act’s contraceptive requirement.

But among liberal Democrats and conservative Republicans there have been sizable changes in opinions of the court; more liberals now view the Supreme Court as conservative – and fewer conservatives view it as liberal – than did so just a few months ago.

The national survey by the Pew Research Center, conducted July 8-14 among 1,805 adults, finds that as many Americans call the court liberal (26%) as say it is conservative (27%). More (38%) say the current Supreme Court is “middle of the road.”

Before the recent rulings, somewhat more viewed the court as liberal (31%) than conservative (25%), with 35% viewing it as middle of the road. 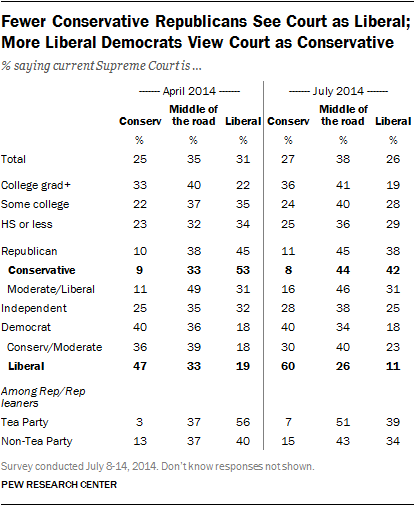 College graduates remain more likely than those with less education to view the Supreme Court as conservative; 36% of those with college degrees say this, compared with about a quarter of those with some college or less. 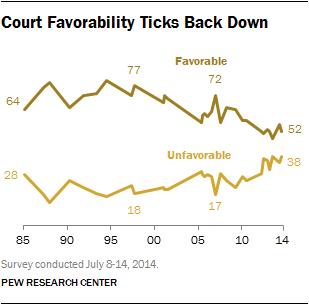 The survey finds that 52% of Americans now view the nation’s highest court favorably, while 38% have an unfavorable opinion. Ratings of the court have edged lower since April (from 56% favorable).

Current ratings are mired near all-time lows (reached a year ago) as the court’s image has declined significantly over the past several years. In January 2007, 72% held a positive view of the court. 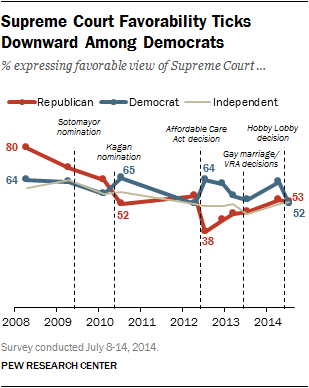 The court’s favorability decline since April has been driven by a shift in views among Democrats. Roughly half of Democrats (52%) view the Supreme Court favorably, down from 63% in April. There has been little movement in favorability ratings among Republicans or independents. 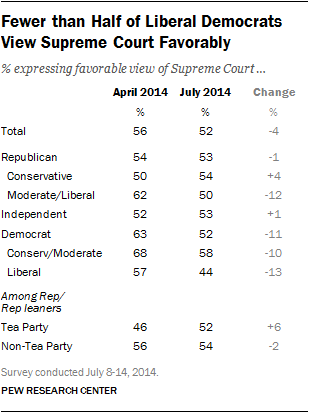 While little changed over the past three months, Republicans’ views of the court are much more positive today than at this point two years ago, following the 5-4 decision that upheld core components of the Affordable Care Act.