Most Americans still are not inclined to view Russia as an adversary, though the share saying Russia represents a serious problem has continued to increase, according to a new survey from the Pew Research Center. 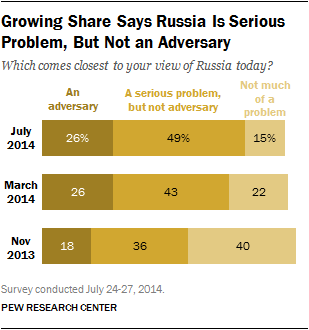 Currently, 26% of the public says that Russia is an adversary, while 49% think it is a serious problem but not an adversary, and just 15% say it is not much of a problem.

Since last November, however, there has been a substantial change in public views of Russia. Currently, 75% view Russia either as an adversary or a serious problem, up from 54% in November. And the proportion viewing Russia as not much of a problem has fallen by more than half, from 40% then to just 15% today. 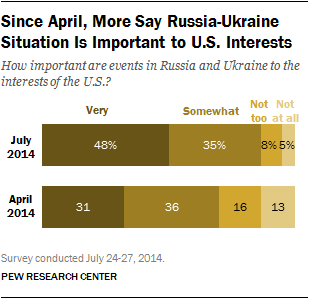 A new national survey by the Pew Research Center, conducted July 24-27 among 1,005 adults, finds that compared with three months ago, the public is more likely to believe that the events in Russia and Ukraine are important to U.S. interests. About a week after Malaysia Airlines Flight 17 was shot down over Ukraine, 48% say events in the region are very important to the United States, up 17 points from April (31%). 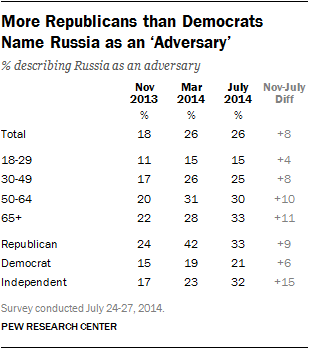 Still, more Republicans, Democrats and independents view Russia as an adversary today than did so last November. 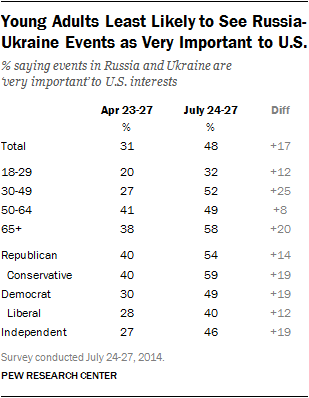 Younger adults remain the least likely to describe Russia as an adversary. Today, just 15% of those under 30 say this, compared with 25% of those ages 30-49 and about three-in-ten (31%) adults 50 and older. Still, about half of each age group labels Russia as a serious problem, but not an adversary.

Democrats (49%) are roughly as likely as Republicans (54%) to say the events are very important to the U.S., up 19 points and 14 points from April, respectively. But conservative Republicans remain far more likely than liberal Democrats to believe what happens between Russia and Ukraine is very important to U.S. interests (59% vs. 40%).