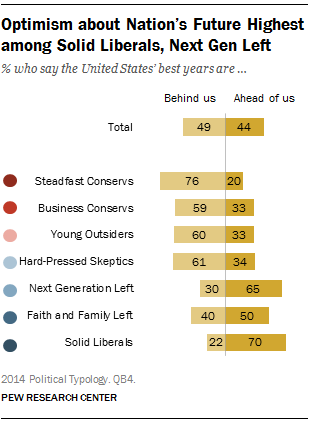 The typology groups differ markedly in their attitudes about America’s future, its standing in the world and the factors behind the nation’s success.

The public generally is divided about the nation’s future: 49% think the country’s best years are behind us, while 44% say the best years lie ahead.

Pessimism about the country’s future is most prevalent among Steadfast Conservatives – fully 76% believe that “the country’s best years are behind us,” as do 59% of Business Conservatives. However, a negative outlook extends to the middle of the typology – 61% of Hard-Pressed Skeptics and 60% of Young Outsiders say the U.S. has already seen its best years.

By contrast, Solid Liberals and the Next Generation Left say the best is yet to come for the United States. Wide majorities of both groups (70% and 65%, respectively) say the country’s best years lie ahead. By a narrow margin, the Faith and Family Left also are more likely to say the best years are ahead (50%) than in the past (40%). 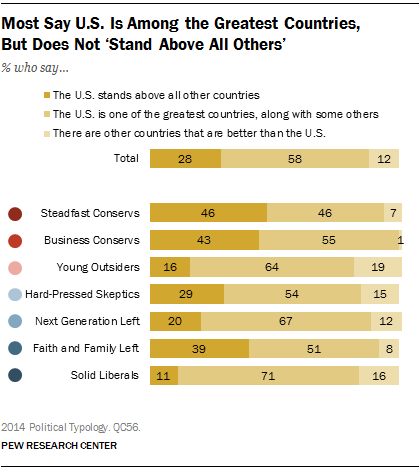 Why Has the Country Been Successful? 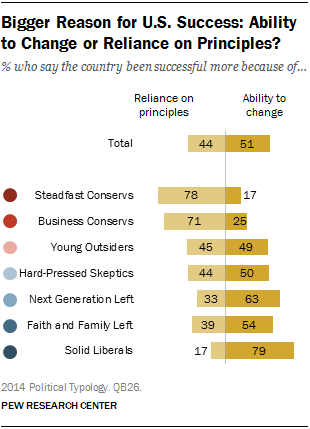 There are greater divisions of opinion when it comes to the question of what explains the past success of the United States, with differences within and across partisan groupings.

Both Steadfast and Business Conservatives see reliance on long-standing principles as the main reason the United States has been successful. Large percentages of both groups (78% and 71%, respectively) take this view.

Solid Liberals overwhelmingly say the country has been successful because of its ability to change (79%-17%). The Next Generation Left also holds this view by a wide 63%-33% margin. Roughly half of the socially conservative Faith and Family Left (54%) credit the nation’s ability to change, while 39% attribute the nation’s success to its reliance on long-standing principles. 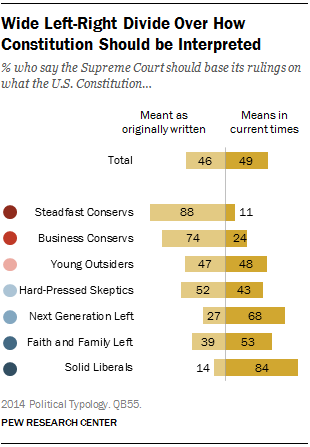 The two most conservative groups stand out for their strong belief that the court should base its rulings on an understanding of the Constitution as originally written. Fully 88% of Steadfast Conservatives support “constitutional originalism,” as do 74% of Business Conservatives – by far the highest percentages of any of the typology groups.

Solid Liberals take the opposite view. More than eight-in-ten (84%) say the Supreme Court should base its understanding of the Constitution on what it means today, not on what it meant when it was originally written. And about two-thirds (68%) of the Next Generation Left also say the court’s rulings should be based on what the Constitution means today. On this question, both Hard-Pressed Skeptics and Young Outsiders are divided.

Views of the Federal Government

Majorities of all typology groups express low levels of trust in government. Distrust is especially acute among the Republican-oriented groups. For example, 93% of Steadfast Conservatives trust the government only some of the time or never. The Next Generation Left are among the least negative groups, yet more still say they trust the government only sometimes or never (59%) than most of the time or always (40%). 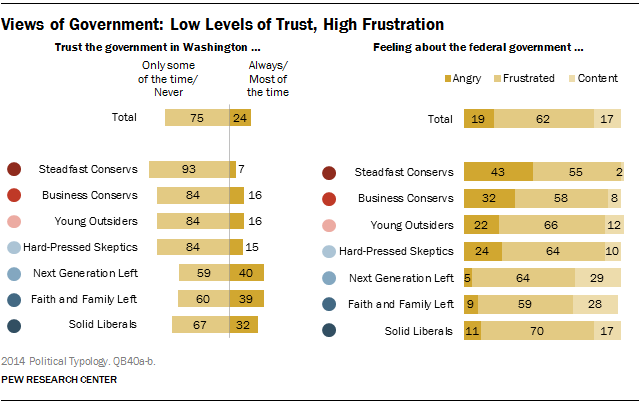 While all groups are frustrated with government, Steadfast Conservatives are the most likely to say they are angry: 43% say they feel this way toward government. By contrast, just 11% of Solid Liberals, 9% of the Faith and Family Left and 5% of the Next Generation Left are angry with government.

Many Business Conservatives (32%) say they are angry with the federal government, though far more describe themselves as frustrated (58%).

Similar percentages of Hard-Pressed Skeptics (24%) and Young Outsiders (22%) say they are angry with government. For both groups, this places them somewhat out of step with the groups at the poles of their partisan leanings: Young Outsiders are about half as likely to be angry with government as Steadfast Conservatives; Hard-Pressed Skeptics are about twice as likely to express anger with the federal government as Solid Liberals. 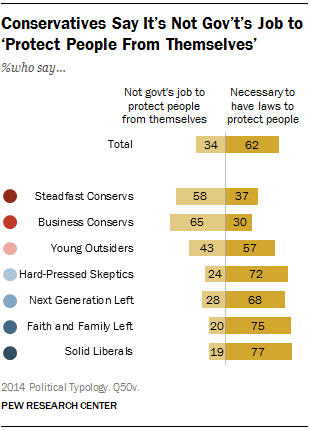 Business Conservatives (65%-30%) and Steadfast Conservatives (58%-37%) are the only two groups where majorities say it’s not the government’s job to protect people from themselves. 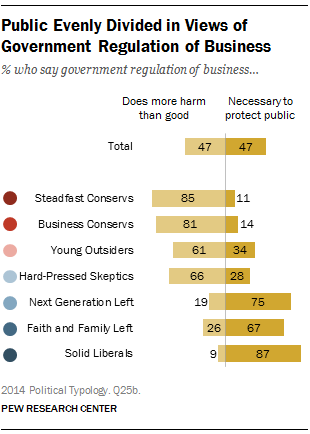 Yet the public has divided opinions about the government’s regulation of business, and large majorities of the typology’s middle groups – Hard-Pressed Skeptics (66%) and Young Outsiders (61%) – say regulation does more harm than good.

Anti-regulation views are a defining feature of the two most Republican typology groups. Fully 85% of Steadfast Conservative and 81% of Business Conservatives say that government regulation of business does more harm than good.

By contrast, there is strong support for government regulation of business among Solid Liberals (87% say regulation is necessary to protect the public interest), the Next Generation Left (75%) and the Faith and Family Left (67%).

Next: Section 3: Fairness of the Economic System, Views of the Poor and the Social Safety Net
← Prev Page
Page1Page2You are reading page3Page4Page5Page6Page7Page8Page9Page10
Next Page →