The Pew Research Center’s political typology finds evidence of the public’s continued wariness about U.S. global involvement. In the poll, conducted January through March of this year, 60% say the U.S. should pay less attention to problems overseas and concentrate on problems here at home, while just 35% say it’s best for the future of the country to be active in world affairs.

This is little changed from the previous political typology study in 2011, when 58% wanted the U.S. to pay less attention to overseas problems. But a decade ago, fewer (49%) wanted the U.S. to focus less on international problems. (For more on public attitudes toward America’s global role, see Public Sees U.S. Power Declining as Support for Global Engagement Slips, Dec. 3, 2013.) 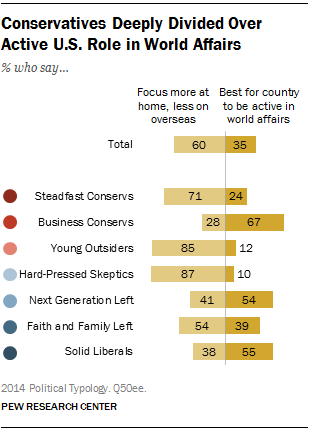 U.S. global involvement divides both the right and left, though to different degrees. Business Conservatives express strong support for an active U.S. global role, with 67% saying it is best for the country to be active in world affairs. Steadfast Conservatives take the opposite view and prioritize focusing on problems at home by a 71% to 24% margin.

On the left, narrow majorities of Solid Liberals (55%) and the Next Generation Left (54%) say it is best for the country to be active in world affairs. The Faith and Family Left disagree, with 54% saying it would be better to concentrate on problems at home. 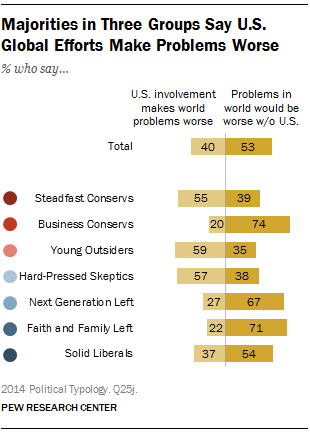 Despite the public’s reticence about global involvement, 53% say that problems in the world would be even worse without U.S. involvement; 40% say that U.S. efforts to solve world problems usually end up making things worse.

The other groups disagree: Business Conservatives express the strongest support for U.S. efforts to solve problems around the world – 74% say they would be worse without U.S. intervention. Large majorities of the Faith and Family Left (71%) and Next Generation Left (67%) share this view. But fewer Solid Liberals (54%) think that global problems would be worse without U.S. involvement; 37% say U.S. actions to alleviate world problems make things worse.

Ideological Divisions over Military Strength, Use of Military Force 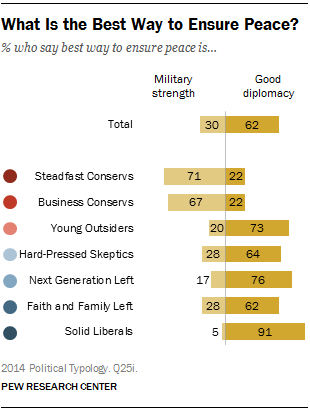 Most Americans see good diplomacy (62%) rather than military strength (30%) as the best way to ensure peace. This view is held by most typology groups, with the exception of Steadfast and Business Conservatives, who hold strong pro-military views.

About seven-in-ten Steadfast Conservatives (71%) and Business Conservatives (67%) believe the best way to ensure peace is through military strength, rather than good diplomacy. 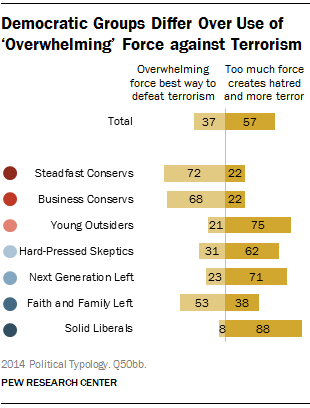 By greater than three-to one, both groups of conservatives support the use of overwhelming force to defeat terrorism around the world. The other groups in the typology take the opposite view, with one notable exception.

About half (53%) of the Faith and Family Left say using overwhelming force is the best way to defeat terrorism. Fewer (38%) think that the use of force creates hatred that leads to more terrorism. 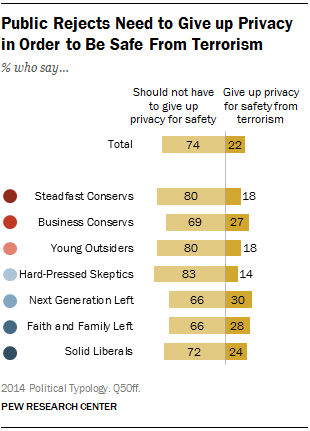 There is broad agreement that Americans should not have to sacrifice civil liberties to be safe from terrorism. This is a view shared across all typology groups.

Opinion is more divided on the specific matter of the NSA’s data collection program. A majority of Americans (54%) disapprove of the government’s collection of telephone and internet data as part of anti-terrorism efforts; 42% approve of the program. 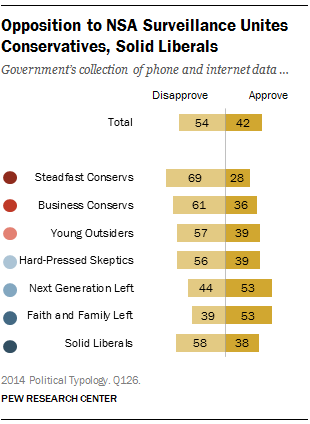 This is a rare issue on which the right and left agree: 69% of Steadfast Conservatives oppose the government’s data collection program, as do 61% of Business Conservatives and 58% of Solid Liberals.

The other Democratically-oriented groups support the data collection program, though by fairly modest margins. About half of the Faith and Family Left and Next Generation Left (53% each) approve of the program. 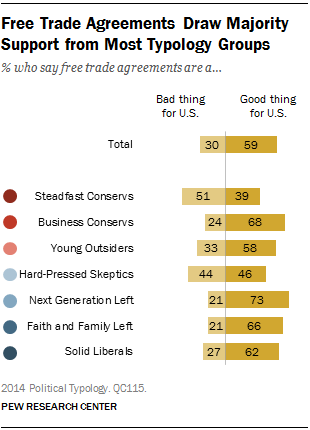 By about two-to-one, more say free trade agreements between the U.S. and other countries have been a good thing (59%) than a bad thing (30%) for the U.S. Views of free trade have improved since the spring of 2011, when the public was more evenly divided (48% good thing vs. 41% bad thing).

Free trade is supported by most typology groups, including 73% of the Next Generation Left and 68% of Business Conservatives.

Steadfast Conservatives are the only group where more say free trade agreements have been a bad thing (51%) rather than a good thing (39%) for the U.S.

Hard-Pressed Skeptics also express doubts about free trade: About as many see trade agreements as a bad thing (44%) as a good thing (46%) for the U.S. 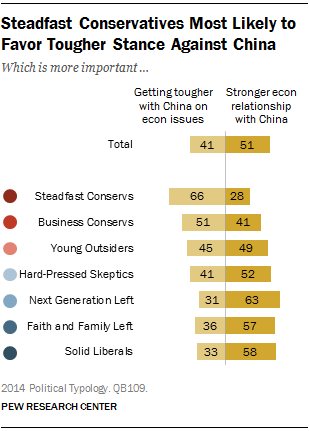 Majorities of Democratically-oriented typology groups prioritize building a stronger economic relationship with China. The strength of this view varies somewhat across groups, with the Next Generation Left being the most likely to support building a stronger relationship with China on economic issues (63%), compared with 52% of Hard-Pressed Skeptics.