There is public agreement that the U.S. economic system unfairly favors powerful interests, and even more Americans believe that large corporations in this country are too powerful. But on both issues, Business Conservatives offer strongly dissenting views; they are the only typology group in which a majority sees the economic system as fundamentally fair.

Overall, the public has long been split over government assistance to the poor and needy. Yet while attitudes about the social safety net generally divide the right from the left, the Next Generation Left stand out among Democratically-oriented groups for their opposition to increased assistance to the needy if it means adding to the nation’s debt. 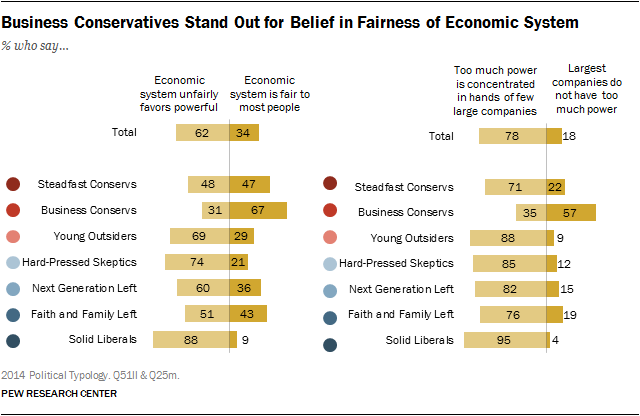 Overall, 62% of Americans say this country’s economic system “unfairly favors powerful interests,” compared with just 34% who think the system “is generally fair to most Americans.” There is variance in opinions about economic fairness among Democratically-oriented groups. For instance, while 88% of Solid Liberals say the economic system is unfair, only about half (51%) of the Faith and Family Left agree.

As their name implies, Business Conservatives also have much more positive views of major corporations than do other Americans. Fully 57% think that the largest companies do not have too much power; no more than one-in-four in other typology groups share this view. Even among Steadfast Conservatives, 71% say large corporations are too powerful. 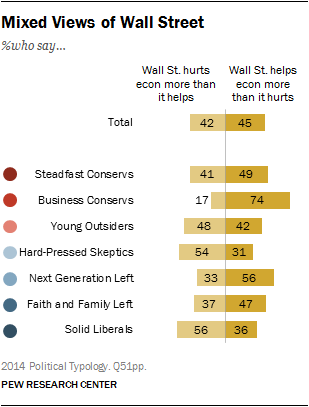 However, there is greater agreement among the two conservative groups about whether corporate profits are appropriate: Majorities of both Business Conservatives (86%) and Steadfast Conservatives (62%) say “most corporations make a fair and reasonable amount of profit.” This view is shared far less widely among other typology groups: Majorities of Solid Liberals (80%), Hard-Pressed Skeptics (79%), and Young Outsiders (66%) say corporations “make too much profit.” But the Faith and Family Left and Next Generation Left are more divided; a narrow majority of the Faith and Family Left (54%) and half of the Next Generation Left (50%) say corporate profits are excessive.

Not only do Business Conservatives have the most positive views of corporations, they also are more likely than other typology groups to say that Wall Street helps more than hurts the U.S. economy. But in this case, they are joined by a 56% majority of the Next Generation Left.

Government Aid to the Poor

Fully 86% of Steadfast Conservatives and Young Outsiders, along with 80% of Business Conservatives, say government aid to the poor does more harm than good by making people too dependent on government assistance. Majorities in the three Democratically-oriented groups, as well as the Democratic-leaning Hard-Pressed Skeptics, express the opposite view—that government aid to the poor does more good than harm because people can’t get out of poverty until their basic needs are met. 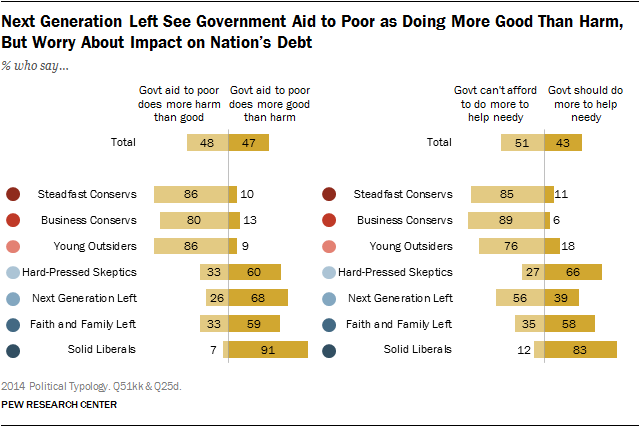 By contrast, majorities of Solid Liberals (83%), Hard-Pressed Skeptics (66%) and the Faith and Family Left (58%) all say the government should do more to help needy Americans even if it results in more debt.

Views of Poverty and the Poor

The public is split in their views of whether government aid to the poor is justified: While 44% say the poor “have it easy because they can get government benefits without doing anything in return,” about as many (47%) believe poor people “have hard lives because government benefits don’t go far enough to help them live decently.” 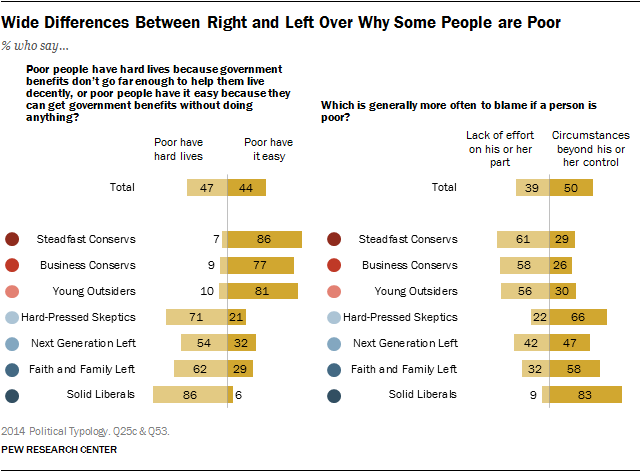 Wide majorities of Steadfast Conservatives (86%) and Business Conservatives (77%) say poor people have it easy; they are joined in this view by 81% of the Republican-leaning Young Outsiders. By contrast, 86% of Solid Liberals think the poor have hard lives and that benefits don’t go far enough to help them live decently; 71% of Hard-Pressed Skeptics agree. Smaller majorities of the Faith and Family Left (62%) and the Next Generation Left (54%) also say this.

Among Democratically-oriented groups, 86% of Solid Liberals and 62% of the Faith and Family Left say that the poor have hard lives because government benefits don’t go far enough to help them live decently; 71% of Hard-Pressed Skeptics also express this view. But the Next Generation Left are more conflicted in their views: About as many say a lack of effort is usually to blame for why a person is poor (42%) as say poverty is the result of circumstances outside of one’s control (47%).

Does Hard Work Lead to Success? 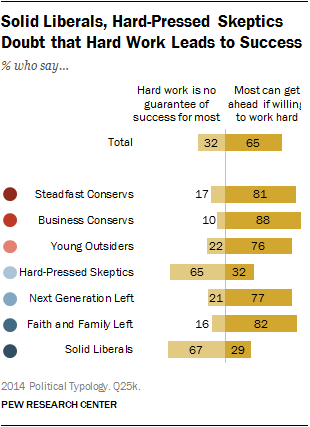 Americans continue to offer broad support for the idea that hard work leads to success in this country. Nearly two-thirds of the public (65%) say most people who want to get ahead can make it if they’re willing to work hard, while just 32% say hard work and determination are no guarantee of success for most people.

However, majorities of two typology groups – Hard-Pressed Skeptics and Solid Liberals – reject the American ideal that hard work is all it takes to succeed.

Hard-Pressed Skeptics face the most difficult financial circumstances of all the typology groups and 65% say hard work is no guarantee of success, compared with just 32% who say most people can get ahead if they’re willing to work hard.

Solid Liberals are a relatively affluent group, but by a 67%-29% margin, they also do not believe that hard work can guarantee success for most people.

Across the five other typology groups, at least three-quarters say most people who want to get ahead can make it if they’re willing to work hard. The Democratically-oriented Faith and Family Left and Next Generation Left are about as likely to hold this view as the three Republican-oriented groups.

Next: Section 4: Views on Immigration and Race
← Prev Page
Page1Page2Page3You are reading page4Page5Page6Page7Page8Page9Page10
Next Page →