On several measures, three groups stand out for their participation in politics: Solid Liberals, Business Conservatives and Steadfast Conservatives. In addition to being the most likely to say they always or nearly always vote, these groups also donate money, contact elected officials and discuss politics with others at the highest rates. 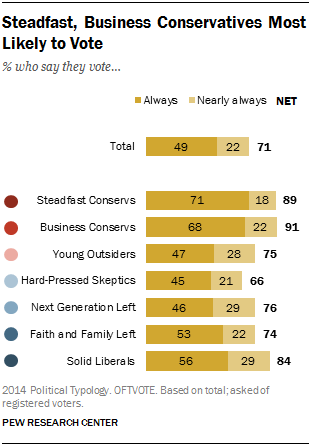 Overall, about seven-in-ten (73%) Americans are registered to vote and say they always (49%) or nearly always (22%) vote. This rises to about nine-in-ten Steadfast Conservatives (89%) and Business Conservatives (91%), and more than eight-in-ten Solid Liberals (84%) 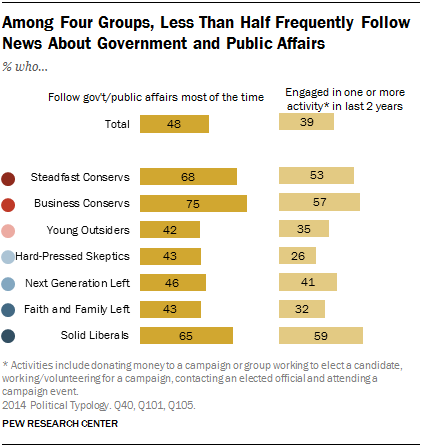 The three more partisan groups are also more likely to engage in a variety of activities related to politics. About four-in-ten (39%) say they have donated money to a campaign or group working to elect a candidate, worked or volunteered for a campaign, contacted an elected official or attended a campaign event in the past two years.

More than half of Solid Liberals (59%), Business Conservatives (57%) and Steadfast Conservatives (53%) have engaged in one or more of those political activities in the past two years. The share drops to 41% among the Next Generation Left, 35% of Young Outsiders, 32% of the Faith and Family Left, and 26% of Hard-Pressed Skeptics.

Just 29% of both Young Outsiders and the Next Generation Left rank politics as one of the topics they are most interested in, as do 22% of the Faith and Family Left. And among Hard-Pressed Skeptics, only 16% rate politics and government as a top interest, near the bottom of the list. (Note: These questions were asked only of internet users, 89% of the general population.) 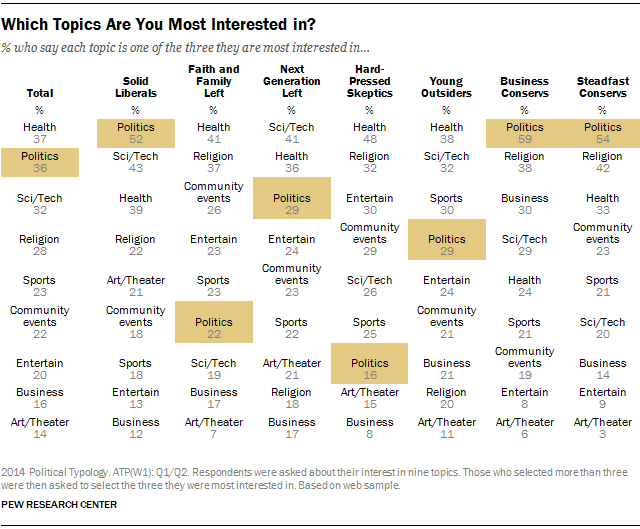 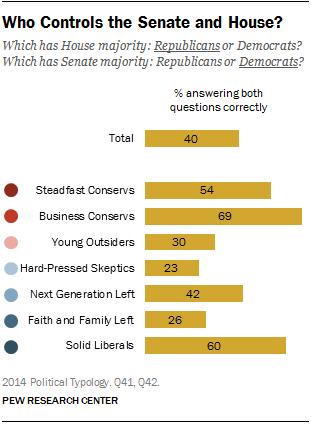 Another key measure of political engagement is how knowledgeable people are about the current political landscape, and here again the more ideological groups score far higher. Nationwide, just 40% of Americans can correctly identify the partisan balance in both the House of Representatives and the Senate (that Republicans have the majority in the former, and Democrats in the latter). The remaining six-in-ten know only one (33%) or neither (28%) of those facts.

Business Conservatives are the most likely to correctly identify the majority party in both houses of Congress (69%), followed by Solid Liberals (60%) and Steadfast Conservatives (54%).

Fewer than half in any of the other groups can correctly identify the majority party in both houses. About four-in-ten (42%) of the Next Generation Left, just three-in-ten (30%) Young Outsiders, and only about a quarter of the Faith and Family Left (26%) and Hard-Pressed Skeptics (23%) are able to correctly identify .

These differences are exhibited in how people communicate about politics as well. The two most conservative groups and the Solid Liberals are more likely than those in other groups to say they enjoy talking about politics with friends and family.

In addition, those three groups are the most likely to have friends who share their views on politics. More than half of Steadfast Conservatives (58%) say most of their close friends share their views, as do 49% of Business Conservatives and 45% of Solid Liberals. By contrast, far fewer in the middle four groups say this about their close friends, instead saying they either have many friends with different points of view, or simply that they don’t know their friends’ political views. 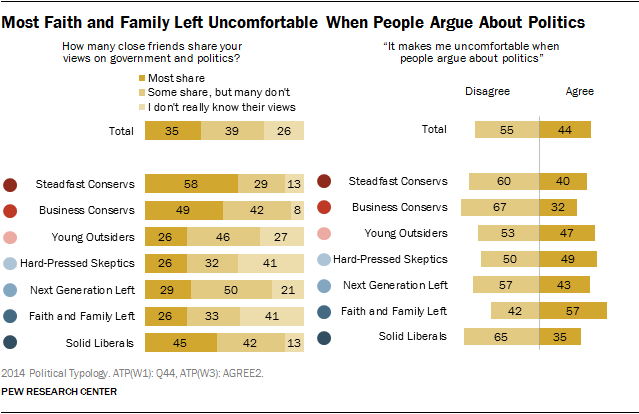