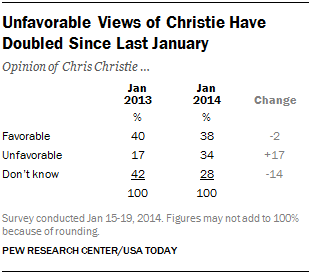 Chris Christie’s public image today is starkly different than it was a year ago. Last January, following Christie’s visible role in Hurricane Sandy relief efforts, favorable opinions outnumbered unfavorable ones by more than two-to-one. Today, in the wake of a scandal involving highway lane closures that led to massive traffic jams in northern New Jersey, nearly as many offer an unfavorable assessment of Christie as a favorable one.

Christie’s explanation of his role in the highway lane closure is drawing skepticism. Most of those who have heard about the controversy do not believe Christie’s assertion that he was not aware of his aides’ involvement in the lane closure. 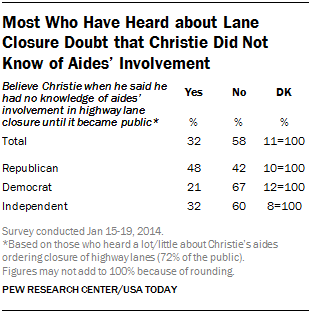 Most Americans say they have heard either a lot (45%) or a little (28%) about Christie’s aides ordering the closure of highway traffic lanes last year, which resulted in major traffic jams in northern New Jersey. Among those who have heard about the incident, 58% say they do not believe Christie when he said he had no knowledge of his aides’ involvement until it became public; 32% say they believe Christie’s assertion that he was unaware of his aides’ role. 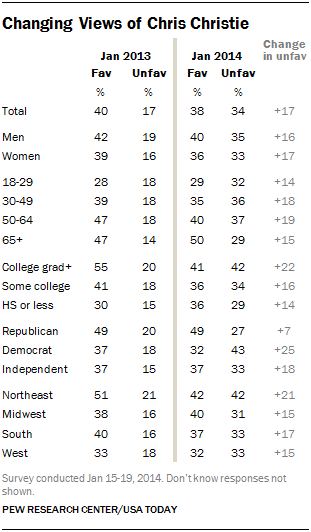 A survey last week, conducted a few days after a press conference in which Christie apologized for the lane closure, found that just 18% tracked news of the apology very closely. At that time, 60% said their opinion of Christie “in the past few days” had not changed.

Compared with last January, unfavorable opinions of Christie are higher across most demographic and partisan groups. The balance of opinion toward Christie is now negative among Democrats (32% favorable, 43% unfavorable), while independents’ views are divided (37% favorable, 33% unfavorable). In January 2013, 37% of Democrats and independents viewed him favorably, while just 18% and 15%, respectively, had an unfavorable impression. 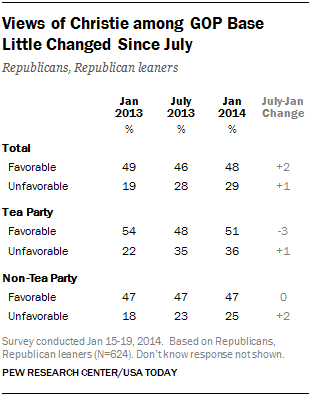 In July, the Pew Research Center conducted a special poll of Republicans and Republican leaners, which included favorability measures for Christie and some other leading GOP figures. Thus, it is possible to track changes in views of Christie among the GOP base across three points over the past year.

Notably, unfavorable opinions of Christie among Republicans and GOP leaners who agree with the Tea Party rose 13 points between January and July, from 22% to 35%. Since then, however, there has been virtually no change in opinions about Christie. Currently, 51% of Tea Party Republicans have a favorable impression of Christie while 36% view him unfavorably.