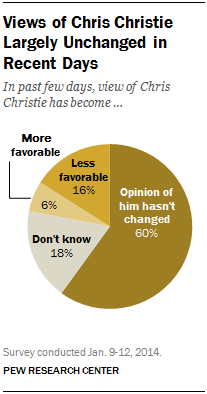 The public paid far more attention to last week’s cold snap than to the controversy swirling around New Jersey Gov. Chris Christie. There also has been little short-term change in opinions about Christie: 60% say their opinion of Christie has not changed in recent days, while 16% now view him less favorably and 6% more favorably.

The national survey by the Pew Research Center, conducted Jan. 9-12 among 1,006 adults, finds that just 18% paid very close attention to Christie’s apology on Jan. 9 for the highway lane closures ordered by his aides. By contrast, 44% very closely followed news about the cold winter weather that gripped much of the U.S. and 28% tracked news about the economy.

The release of a book by former Defense Secretary Robert Gates that criticized the Obama administration drew even less interest than news about Christie. Just 11% followed news about Gates’ book very closely. 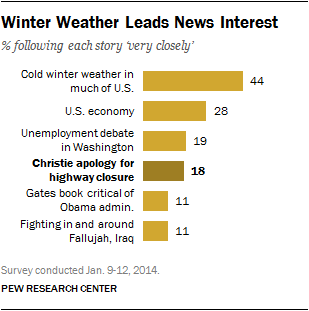 The survey finds that majorities of Republicans (69%), Democrats (55%) and independents (60%) say that their opinion of Christie has not changed lately. Among Republicans, about as many say their opinion has become more favorable (9%) as less favorable (10%). 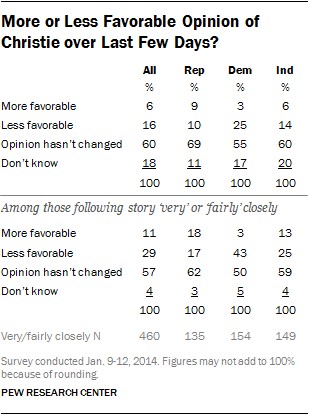 Those who followed news about Christie’s apology at least fairly closely are more likely to have changed their opinions about the New Jersey government in recent days. Nonetheless, 57% of those who tracked news about Christie say their opinion of him has not changed; 29% say it has become less favorable, while 11% say it has become more favorable.

Republicans are about as likely as Democrats to have followed the Christie story at least fairly closely last week (43% vs. 46%). Like Republicans overall, those who followed the story at least fairly closely are closely divided between those who are more favorable to Christie (18%) and less favorable (17%), with 62% saying their opinion hasn’t changed.

The most closely followed story of the week was the cold winter weather that swept much of the country. About three-quarters of the public followed the news very closely (44%) or fairly closely (32%). Attention was lowest in the West, where 28% paid very close attention to the news, compared with 55% of those in the Midwest, 51% of those in the East and 43% of those in the South.

Overall, 18% say they followed news about Christie’s apology for the lane closures ordered by his aides very closely. Interest in this story was higher in the East (26% very closely) and Midwest (23%) than in the South or West (14% each).

Just one-in-ten (11%) very closely followed news about former Defense Secretary Robert Gates’ new book, in which he is critical of the Obama administration. An identical percentage (11%) paid very close attention to the fighting in and around the Iraqi city of Fallujah. More Republicans (17%) than Democrats (7%) very closely followed the story last week.