As Ben Bernanke prepares to step down as chairman of the Federal Reserve in January, the public views him somewhat more favorably (38%) than unfavorably (31%), with 32% unable to offer a rating. 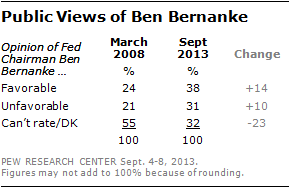 Bernanke is better known now than he was in March 2008, when 55% could not rate him; at that time, 24% viewed him favorably and 21% held an unfavorable view.

The national survey by the Pew Research Center, conducted Sept. 4-8 among 1,506 adults, finds that Republicans view Bernanke less favorably than they did five years ago. Currently, more Republicans have an unfavorable (42%) than favorable (32%) view of Bernanke. 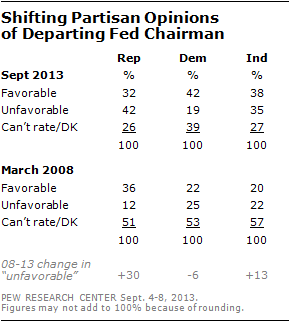 By contrast, Bernanke’s image among Democrats is more positive than it was in 2008. In the current survey, Democrats view Bernanke favorably by a 42%-19% margin. Democrats had mixed views of Bernanke in 2008 (22% favorable, 25% unfavorable). Independents continue to express mixed views of the Fed chair. 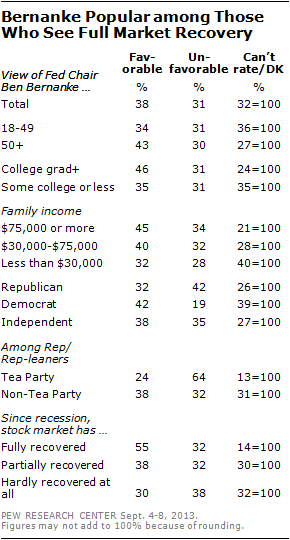 Bernanke is better known – and better liked – among college graduates than those with less education. About three-quarters of college graduates (76%) are able to offer a rating of Bernanke and they view him more favorably than unfavorably by a 46%-31% margin. Among those who have not completed college, fewer have an impression of Bernanke (65%) and opinions are more mixed (35% favorable vs. 31% unfavorable).

Views of Bernanke are closely tied to impressions of the stock market recovery. Among the roughly one-in-five Americans (21%) who say the stock market has fully recovered from the recession: 55% view Bernanke favorably compared with 32% who view him unfavorably (14% have no opinion). Bernanke is not as well known, and is viewed less favorably, among those who say the market has partially recovered (53% of the public) or has hardly recovered at all (18%) from the recession. (For more, see “Five Years after Market Crash, U.S. Economy Seen as ‘No More Secure’,” Sept. 12, 2013.)

Republicans Sour on Ben Bernanke
Survey Report
About the Survey