Five years after the U.S. economy faced its most serious crisis since the Great Depression, a majority of Americans (63%) say the nation’s economic system is no more secure today than it was before the 2008 market crash. Just a third (33%) think the system is more secure now than it was then. 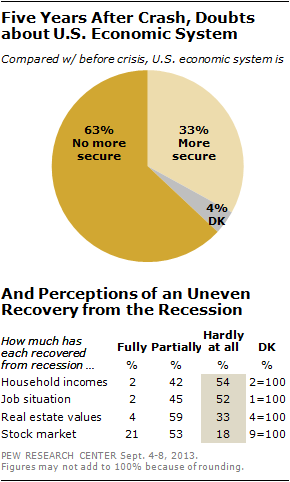 Large percentages say household incomes and jobs still have yet to recover from the economic recession. And when asked about the impact of government efforts to deal with the recession, far more believe that economic policies have benefitted large banks, corporations and the rich than the middle-class, the poor or small businesses.

The latest national survey by the Pew Research Center, conducted September 4-8 among 1,506 adults, finds that 54% say household incomes have “hardly recovered at all” from the recession. Nearly as many (52%) say the job situation has barely recovered.

A Rise in Wealth for the Wealthy; Declines for the Lower 93%

Government policies in response to the recession are seen as having done little to address the uneven recovery. Broad majorities say the government’s policies following the recession have done not much or nothing at all to help poor people (72%), middle-class people (71%), and small businesses (67%). Yet majorities say government policies have done a great deal or a fair amount to help large banks and financial institutions (69%), large corporations (67%), and wealthy people (59%). 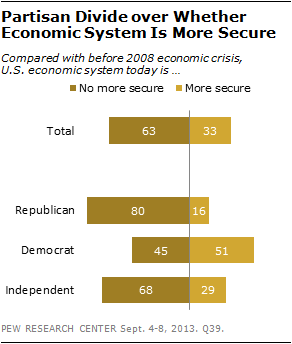 The belief that the U.S. economic system is no more secure today than it was before the financial crisis is widely shared across demographic groups. There are partisan differences, however, with Democrats more likely than Republicans or independents to say that the system is more secure.

Large majorities of Republicans (80%) and independents (68%) say the economic system is not more secure than prior to the financial crisis. Democrats are divided: 51% say the system is more secure today while 45% say it is not.

There also is substantial disagreement between Republicans and Democrats over whether the government has gone too far or not far enough in regulating markets and financial institutions. 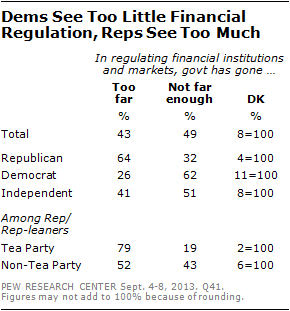 The public sees clear winners and losers as a result of the government’s economic policies following the recession that began in 2008. 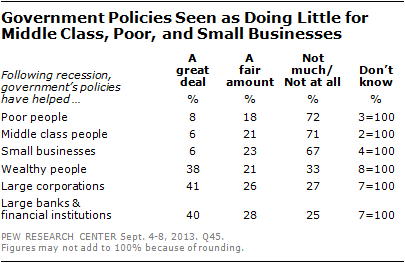 There has been little change in these perceptions since the question was last asked in July 2010. 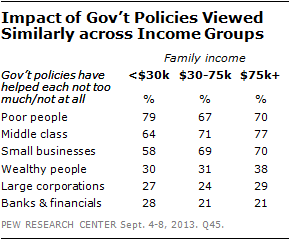 There are only modest differences on this question across income groups, with general agreement over which groups have been helped – and not helped – by the government’s economic policies. For example, 79% of those in households earning less than $30,000 a year say government economic policies have done not much or nothing at all to help poor people; among those with family incomes of $75,000 or more, a similar 70%-majority shares this view.

Many See an Uneven Economic Recovery 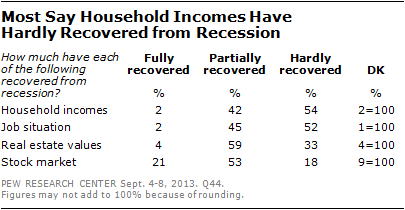 More than four years after the end of the recession, roughly half say that household incomes and the job situation have hardly recovered at all. Casting these views in an even more negative light is the perception that other economic sectors – the stock market and real estate values – have seen more of a recovery. 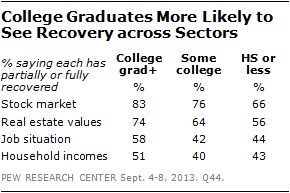 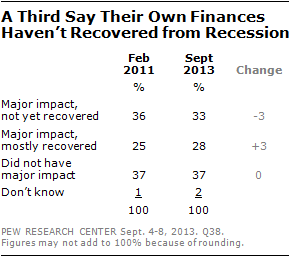 The percentage saying the recession had a 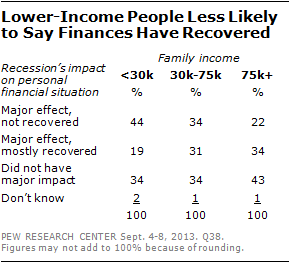 major impact on their financial situation and they have yet to recover has remained stubbornly flat over the course of the last several years. In February of 2011, 36% said this, almost identical to the 33% who say this today.

Low-income respondents are the most likely to say that the recession hurt their personal finances and that they have yet to recover. Overall, 44% of those with family incomes of less than $30,000 a year say their finances have not recovered from the recession, double the percentage among those with incomes of $75,000 or more.

Five years after the financial crisis, views of the national economy still remain negative. Only 19% rate the economy as excellent or good. By contrast, about a third (32%) rate the economy as poor and roughly half (48%) say economic conditions are only fair.

Perceptions of the economy have become less negative just over the course of this year. In January 2013, 49% said the economy was poor, 17 points higher than today.

Currently, roughly equal percentages expect the economy to get better (28%) as worse (25%) in the coming year. For most of Obama’s presidency, economic optimism has outweighed pessimism. This is only the second time since Obama became president when economic optimism did not significantly exceed economic pessimism. 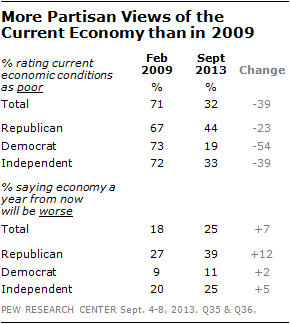 In February 2009, when national economic ratings hit an all-time low,
there was unusual partisan agreement in evaluations of the economy. Comparable percentages of Democrats (73%), independents (72%) and Republicans (67%) said the nation’s economy was in poor shape.

Since then, the percentage rating the economy as poor has fallen across the board, but much more steeply among Democrats and independents than Republicans. Today, just 19% of Democrats view economic conditions as poor, compared with 33% of independents and 44% of Republicans.

The public’s economic expectations have shown less change over the past four years. Currently, 25% say they expect economic conditions to worsen in the coming year; 18% said this in February 2009. In the current survey, more Republicans (39%) than independents (25%) or Democrats (11%) expect the economy to get worse. In February 2009, 27% of Republicans, 20% of independents and 9% of Democrats said the economy would be worse in a year. 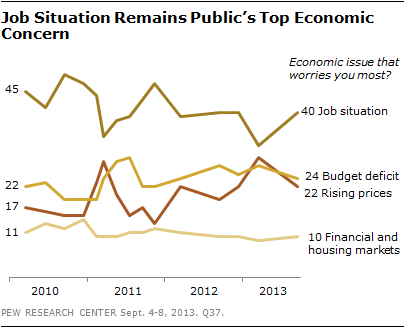 Overall, 40% say that the job situation is the national economic issue that worries them most, while somewhat fewer cite the budget deficit (24%) or rising prices (22%); just 10% say the condition of the financial and housing markets is their top economic worry.

The percentage citing the job situation as their top economic worry has increased eight points since March, 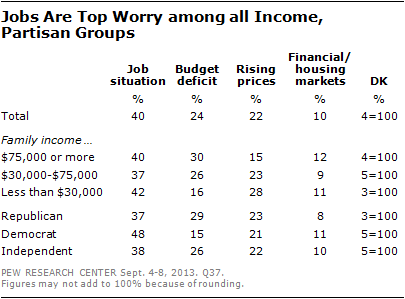 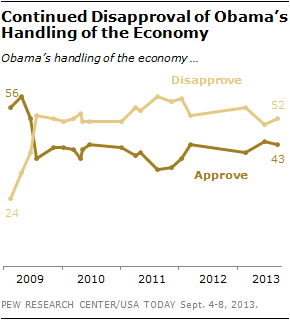 ove of the way that Barack Obama is handling the economy, while 52% disapprove. Obama’s job rating on the economy has shown little change this year. Views of Obama’s handling of the economy have been consistently more negative than positive since shortly after he took office in early 2009.

Republicans disapprove of Obama’s handling of the economy by an 85%-12% margin, while Democrats approve 75%-19%. Most independents (56%) disapprove of the job Obama is doing on the economy, while 38% approve.

Obama’s current rating on the econom 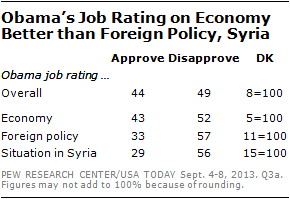 y is similar to his overall job rating (44% approve, 49% disapprove) and much higher than is ratings for handling the nation’s foreign policy and the situation in Syria.

Just 33% approve of the way Obama is handling the nation’s foreign policy – the lowest mark of his presidency. And just 29% approve of his handling of the situation in Syria while nearly twice as many disapprove. (For more, see “Opposition to Syrian Airstrikes Surges,” Sept, 9, 2013.) 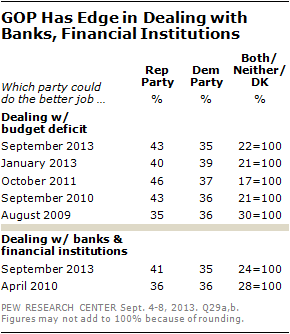 The Republican Party holds a slim advantage over Democrats as the party seen as best able to deal with the federal budget deficit and with banks and financial institutions. 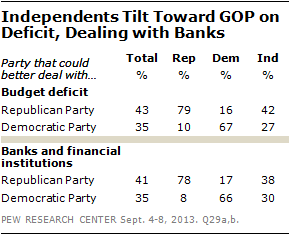