While the balance of opinion toward abortion nationwide has remained largely steady over the past 20 years, there are widening disparities in public attitudes on the issue across different regions of the country. 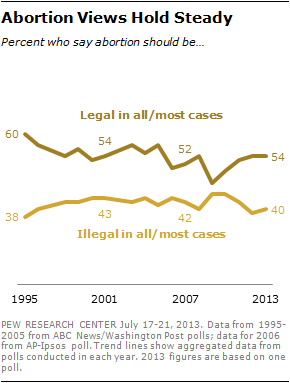 The new national survey by the Pew Research Center, conducted July 17-21 among 1,480 adults, finds that just over half of all Americans (54%) say that abortion should be legal in all or most cases. Fewer (40%) say it should be illegal in all or most cases. At the national level, public views on abortion have changed little over the last few years, and the balance of opinion has remained largely consistent for most of the past two decades (see: Views on Abortion, 1995-2013). 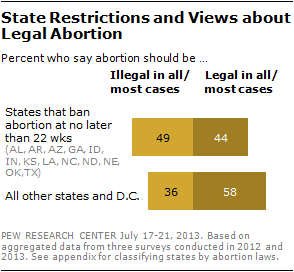 This month Texas joined 12 other states, mainly in the South and Midwest, that have banned abortions at no later than 22 weeks of pregnancy. (The new Texas law bans abortions at 20 weeks. Some of these other laws are temporarily blocked by court injunction.) In polling conducted in 2012 and 2013, about half (49%) of the residents of these 13 states believe abortion should be illegal in all or most cases. By comparison, in the other 37 states and the District of Columbia, just 36% agree, while 58% say abortion should be legal in all or most cases. 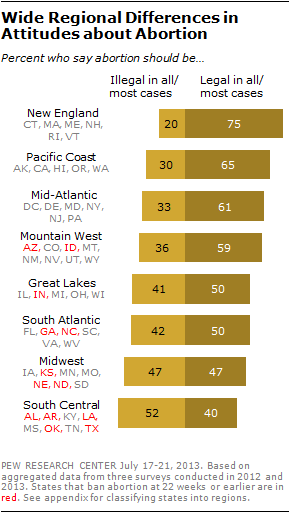 These differences reflect a broader regional divide. New England residents are most likely to favor legalized abortion. Fully 75% say abortion should be legal in all or most cases, while 20% say abortions should be illegal in all or most cases. Roughly two-thirds (65%) in the Pacific Coast region, and solid majorities in the Mid-Atlantic (61%) and Mountain West (59%) also favor legal abortion.

At the other end of the spectrum, residents of the South Central states – ranging from Texas and Oklahoma to Alabama to Kentucky – express the least support for abortion. A majority (52%) in these states say that abortion should be illegal in all or most cases, while just 40% say it should be generally legal. There is also substantially more opposition to abortion in Midwestern states than in the country at large. In this region – ranging from Kansas and Missouri to Minnesota and North Dakota –as many say abortion should generally be illegal as say it should generally be legal (47%).

These regional differences are similar to the steep national divide over gay marriage. A 2012 Pew Research Center analysis found that same-sex marriage received broad support in New England and faced the most opposition in the South Central states.

There are signs that this regional disparity may be widening over time, as views in the South have turned more 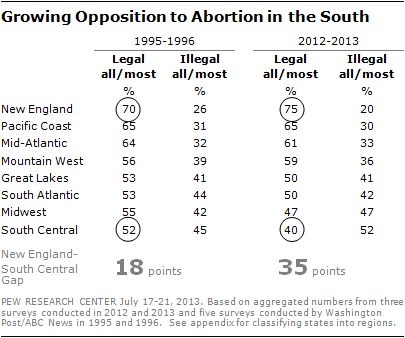 strongly against abortion. In Washington Post/ABC news surveys conducted over the course of 1995 and 1996, 70% of New England residents generally supported legal access to abortion compared with 52% in the South Central region – an 18-point gap. This difference has nearly doubled to 35 points in Pew Research Center surveys over the past year-and-a-half, as support for legal abortion remains widespread in New England (75%), but has fallen to just 40% in the South Central states.

The regional breakdowns used in this report are based on the U.S. Census regions and divisions, with two exceptions. MD, DE and DC are grouped in the Mid-Atlantic with NY, NJ and PA, instead of in the South Atlantic. The Census divisions of East South Central and West South Central are combined into a single South Central designation.

These 13 states have laws that ban abortion at 22 weeks of pregnancy or earlier (for example, North Dakota has a law that bans abortion after six weeks): AL, AR, AZ, GA, ID, IN, KS, LA, NC, ND, NE, OK, TX. In AR, AZ, GA, ID, and ND these laws have been temporarily blocked by courts and are not currently in effect. The other 37 states and the District of Columbia do not ban abortions at 22 weeks, but may ban them after a later point or have other regulations concerning abortion or clinics that perform abortion. This analysis does not account for whether a state’s law has exceptions for rape, incest or the life of the mother, and only uses the week limit that applies to women who do not qualify for an exception.

Widening Regional Divide over Abortion Laws
OverviewAppendix:
About the Survey