There is broad partisan agreement that it would be unrealistic to deport all undocumented immigrants. Fully 80% of Democrats express this view, as do 78% of independents and 76% of Republicans.

And majorities across partisan lines also agree that it would better for the economy if undocumented immigrants became legal workers. In addition, 81% of Democrats, along with 73% of independents and 69% of Republicans, say “most undocumented immigrants are hard workers who should have the opportunity to stay in this country and improve their lives.” 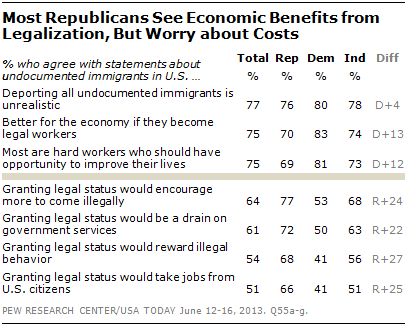 But there are sharper divisions over possible negative effects from legalization – on jobs and government services – and whether granting legal status would be a reward for illegal behavior and encourage others to enter the country illegally.

About seven-in-ten Republicans (72%) and 63% of independents say providing legal status to undocumented immigrants would be a drain on government services. Just 50% of Democrats agree. The divide between Republicans and Democrats is about as wide (25 points) over whether legalization would take jobs from U.S. citizens.

Nonetheless, about as many Republicans say that providing legal status to undocumented immigrants would be better for the economy (70%) as say it would cost jobs (66%). And among Democrats and independents, much larger shares say granting legal status would help the economy than take jobs from citizens.

Notably, large majorities of both Republicans (77%) and independents (68%) say that granting undocumented immigrants legal status would encourage more people to come to the United States illegally. Only about half of Democrats (53%) agree.

In addition to the clear divisions between the parties on these issues, there are also differences within both parties in views about undocumented immigrants. 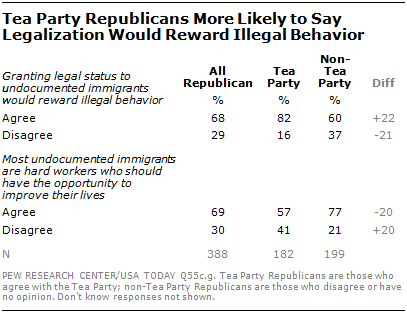 There also are substantial differences between liberal Democrats and conservative and moderate Democrats in views of undocumented immigrants. 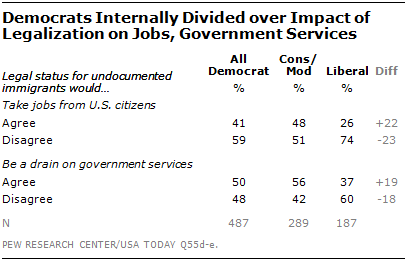 jobs from U.S. citizens (41% agree, 59% disagree), conservative and moderate Democrats are divided on this question (48% agree, 51% disagree). By contrast, just 26% of liberal Democrats agree with the statement and nearly three quarters disagree (74%) – including 45% who express strong disagreement.

Similarly, most conservative and moderate Democrats (56%) agree that providing legal status would be a drain on government services, while most liberal Democrats (60%) disagree.

There are also differences along racial and ethnic lines in opinions about the impact of granting legal status to undocumented immigrants. About seven-in-ten whites (69%) say legalization would encourage more people to come to the U.S. illegally, compared with about half of both Hispanics (50%) and blacks (49%).

In addition, a solid majority of whites say that granting this population legal status would reward illegal behavior (57%). Hispanics are more evenly divided on this question (45% agree, 49% disagree) as are blacks (46% agree, 52% disagree). 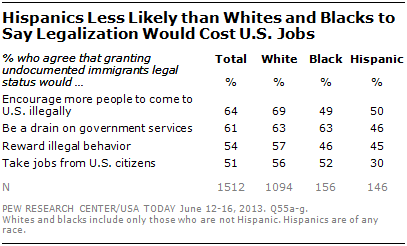 On the economic arguments, one for and one against granting legal status, there is broad agreement among whites (71%), blacks (79%) and Hispanics (91%) that it would be better for the economy if undocumented immigrants could become legal workers. Yet, there is division over whether granting legal status to undocumented immigrants would take jobs from U.S. citizens: 56% of whites and 52% of blacks agree, compared with just 30% of Hispanics.