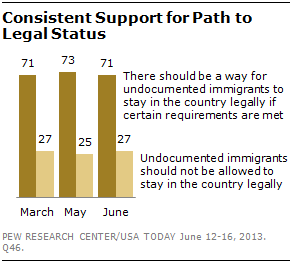 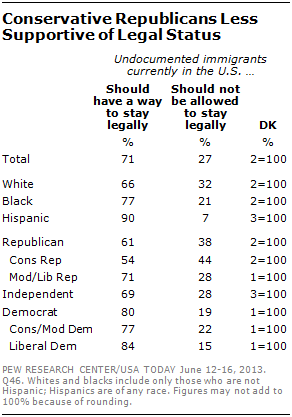 Support for legal status for undocumented immigrants varies widely, but majorities across nearly all groups say there should be a way for them to stay in the U.S. legally. For the most part, there has been little change in these views since May, but opposition to legal status has increased among conservative Republicans over the last month (from 34% to 44%).

When it comes to specific requirements for legal status, 76% of Americans favor requiring undocumented immigrants to show they can speak and understand English before gaining legal status.

Large percentages of whites (79%) and blacks (77%), as well as smaller majority (60%) of Hispanics, support an English requirement 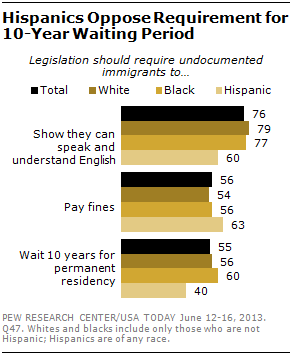 Hispanics are as likely as whites and blacks to say undocumented immigrants should pay fines before obtaining legal status. About six-in-ten Hispanics favor this proposal, compared with 56% of blacks and 54% of whites.

However, there is more opposition than support among Hispanics for requiring a 10-year waiting period for most undocumented immigrants before they can gain permanent residency (59% oppose, 40% favor), while majorities of both whites (56%) and blacks (60%) favor this. 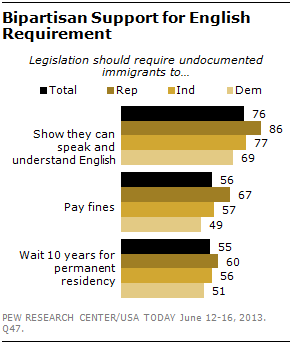 There are sizable partisan differences in opinions about proposed pre-requisites for legal status. But large majorities of Republicans (86%), Democrats (69%) and independents (77%) say that undocumented immigrants should be required to show they can speak and understand English before gaining legal status.

There also are divides among Democrats over this proposal: 80% of moderate and conservative Democrats favor an English language requirement – little different than the opinions of Republicans and independents; in contrast, 50% of liberal Democrats support this proposal, while about as many (49%) oppose it.

Roughly half of Democrats support requiring undocumented immigrants to wait 10 years before they could become permanent residents (51%) and to pay fines (49%). Majorities of Republicans favor each of these proposals (60% 10-year wait, 67% pay fines).

Should the Border be Secure First?

On a question central to the current debate – whether applications for legal status need to wait until there is effective control of the border – the public is largely split. About half (49%) say undocumented immigrants should be allowed to apply for legal status while improvements are being made, 43% say effective control over the border should be established before undocumented immigrants can apply. 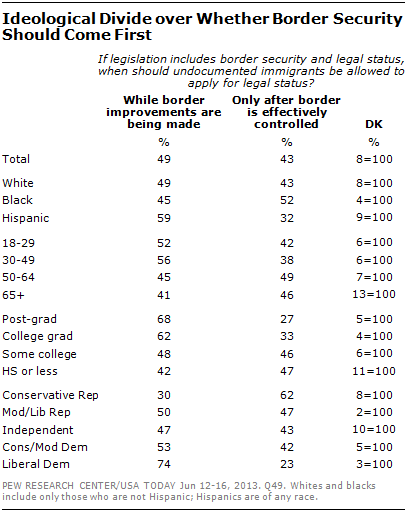 Liberal Democrats, those with college degrees, those younger than 50 and Hispanics are the most likely to say undocumented immigrants should be allowed to apply while border improvements are being made. Three-quarters of liberal Democrats (74%) say this, compared to 30% of conservative Republicans; other political and ideological groups are about evenly split.

Those with graduate degrees (68%) and bachelor’s degrees (62%) are more likely than those with some college (48%) or no college (42%) education to say that improvements to border security can be concurrent with applications for legal status.

While whites and blacks are split on this question, Hispanics say – by nearly two-to-one (59% to 32%) –that undocumented immigrants should be allowed to apply for legal status while border improvements are being made. Younger people (those younger than 50) are more likely than those 50 and older to say the same.

About Half Say Immigration Bill is Likely to Pass

Roughly half of Americans (53%) say passing significant new immigration legislation this year is very or somewhat likely. Half (50%) also say it is extremely or very important to do so. 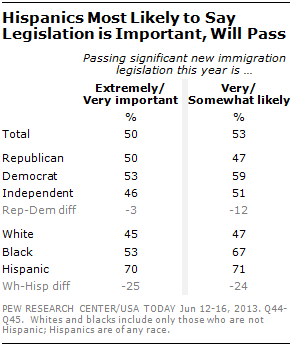 Democrats are more confident than Republicans or independents that significant new immigration legislation will pass this year: 59% of Democrats, compared with 51% of independents and 47% of Republicans say passage is at least somewhat likely this year. Hispanics (71%) and blacks (67%) are much more likely than whites (47%) to say this.

Most Say Illegal Immigration is Up

A majority of Americans (55%) say that the number of immigrants entering the U.S. illegally is higher today than it was 10 years ago. Just 15% say the number is lower, while 27% say it is about the same. While immigration flows are difficult to measure, research from the Pew Hispanic Center has shown that the numbers of undocumented immigrants in the U.S. had declined by 2011 (the last year for which data is analyzed), from a high point in 2007; they have also shown that migration from Mexico has declined substantially in recent years.

Among partisan groups, there are few differences on this question, with the exception of liberal Democrats, who are much less likely than all other partisan groups 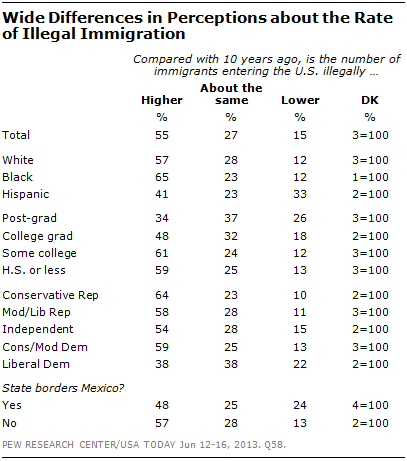 to say the number of immigrants entering the U.S. illegally is greater today than it was 10 years ago. Just 38% of liberal Democrats say the rate of illegal immigration has increased, compared with majorities in other partisan groups.

Those living in states that border Mexico are also somewhat less likely to say the rate has increased (and more likely to say it’s gone down) compared with those in other states. 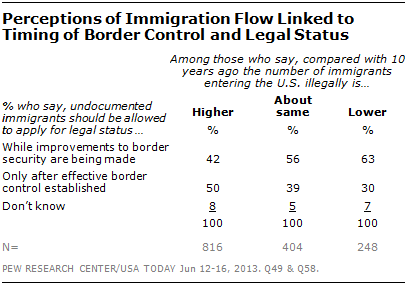 security needs to be addressed before applications for legal status can begin. Among the 55% of Americans who say the number of immigrants entering the country illegally is now greater than it was 10 years ago, half (50%) say applications for legal status should only be allowed after effective border control has been established; 42% say these can happen concurrently. The balance of opinion is reversed among those who say the illegal immigration rate has held steady or dropped: More say undocumented immigrants should be allowed to apply for legal status while improvements are being made to border security (58%) than say border improvements must come first (36%).

‘Borders First’ a Dividing Line in Immigration Debate
Section 1: The Immigration Policy Debate
Public’s Top Requirement for Legal Status: Learn EnglishShould the Border be Secure First?About Half Say Immigration Bill is Likely to PassMost Say Illegal Immigration is Up
Section 2: View of Undocumented Immigrants, Impact of Legalization About the Survey