The public is divided over whether the leak of classified information about NSA phone and internet surveillance serves the public interest. But a majority says that former government contractor Edward Snowden should 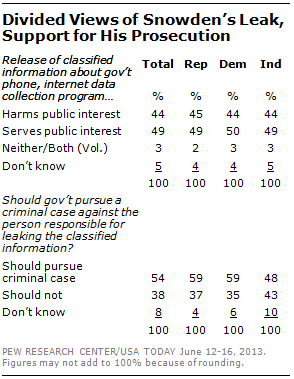 The new national survey, conducted June 12-16 by the Pew Research Center and USA TODAY among 1,512 adults, finds that 44% think that the release of classified information about the NSA program harms the public interest, while 49% say it serves the public interest.

However, 54% of the public – including identical majorities of Republicans and Democrats (59% each) – say the government should pursue a criminal case against the person responsible for leaking the classified information about the program.

Young people, by 60% to 34%, think that the NSA leak serves the public interest. Americans 30 and older are divided (46% serves vs. 47% harms). And while those younger than 30 are divided over whether Snowden should be prosecuted, majorities in older age groups favor the government pursuing a criminal case against him. The survey finds that the public has a more positive opinion about the impact of the revelations of NSA communications surveillance on the public interest than it did 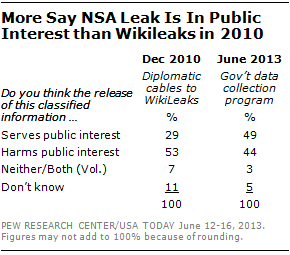 about the release of a massive trove of classified material about U.S. diplomatic relations by the Wikileaks website two-and-half years ago.

In terms of the impact of the NSA surveillance on personal privacy, about half of Americans (54%) say the U.S. government probably has collected data about their personal phone calls, emails and other online communications. More (63%) say that if they knew that the government had collected such information, they would feel like their privacy would have been violated.

Mixed Approval of NSA Program, But Most Say It Helped Prevent Terrorism

The public is divided over the NSA surveillance program itself. About as many approve (48%) as disapprove (47%) of 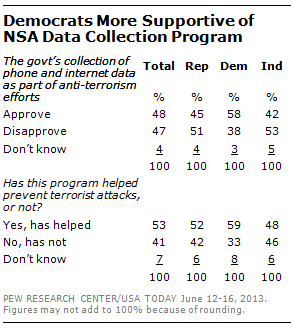 the “government’s collection of telephone and internet data as part of anti-terrorism efforts.”

Yet a majority of Americans (53%) think the government’s collection of telephone and internet data has helped prevent terrorist attacks, while 41% say it has not.

There are wider partisan differences in views of the program than about whether the leak of NSA surveillance serves the public interest, or whether Snowden should be criminally prosecuted. Nearly six-in-ten Democrats (58%) approve of the government’s data collection efforts, compared with 45% of Republicans and 42% of independents. Democrats are also more likely than Republicans or independents to say the program has helped prevent terrorist attacks.

In a Pew Research Center/Washington Post survey released a week ago, more Democrats (64%) than Republicans (52%) said it was acceptable for the NSA to get “secret court orders to track telephone call records of millions of Americans in an effort to investigate terrorism.” In that survey overall, 56% of the public said they considered the NSA phone tracking program acceptable. 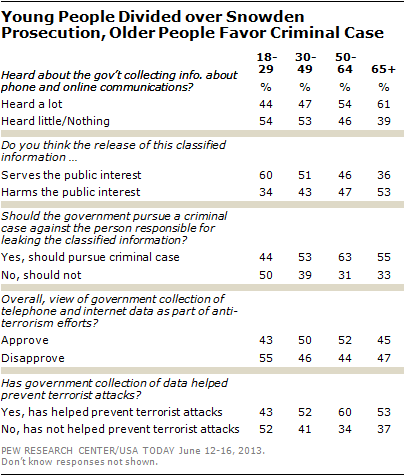 People under 30 also are somewhat more skeptical about the NSA program’s effectiveness. Just 43% of young people say the program has helped prevent attacks, compared with about half or more in older age groups.

Tea Party Republicans are paying a great deal of attention to news about the NSA surveillance program and are highly critical of it. By more than two-to-one (65% to 29%) Republicans and 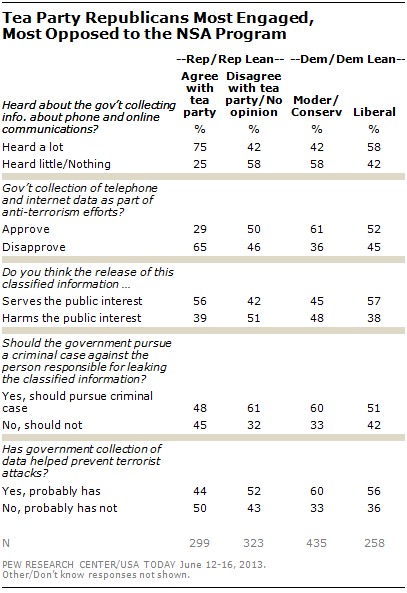 On the question of whether the leaked information serves the public interest, there are significant divides within both parties’ political bases. In the GOP, Tea Party Republicans are more likely than their more moderate counterparts to see the release of the classified information as serving the public interest. Within the Democratic Party, more liberals than moderates and conservatives view the leaks as a good thing.

The same gaps exist when it comes to whether to prosecute Edward Snowden. There is substantially less support for pursuing a case against the leaker among Tea Party Republicans and liberal Democrats than there is among moderate segments of the party bases.

Most Think Gov’t Has Probably Collected Their Data

A majority of Americans (54%) think the U.S. government has collected data about their phone or online communications; 39% say it has probably not. 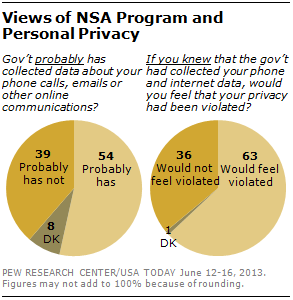 When asked how they would feel if they knew that the federal government had collected data about their phone and internet activity, 63% say they would feel that their personal privacy has been violated.

Men are more likely than women to think the government has collected their personal data (58% vs. 49%). Two-thirds of blacks (66%) believe this, compared to about half of whites (51%) and Hispanics (50%). 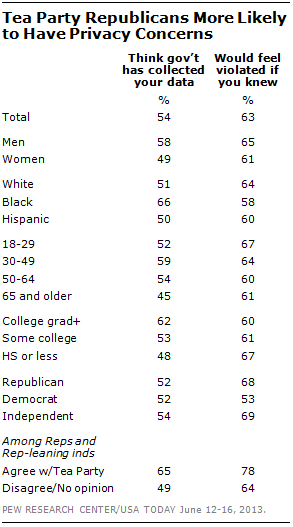 Yet there are sharper partisan divisions about how people would feel if they knew the U.S. government had collected data about their personal phone and internet activity. Fully 69% of independents and 68% of Republicans would consider this a violation of their personal privacy, compared with 53% of Democrats.

Overall, the share of the public who say they would feel their personal privacy had been violated is little changed 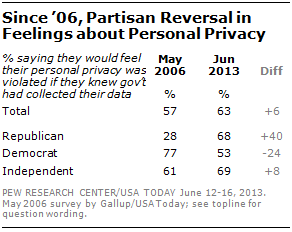 from 2006, when a similar Gallup/USA Today question asked about telephone companies providing people’s records to the federal government (63% today vs. 57% then).