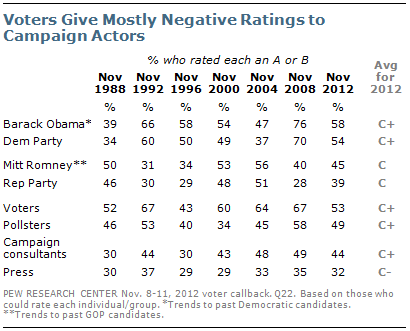 Voters give mixed reviews of the way the candidates and the parties handled the campaign this year. Of voters who rated Obama, 58% give him a grade of A or B for the way he conducted himself in the campaign.

That is far lower than the 76% who gave Obama equivalent grades four years ago, but on par with the ratings for Al Gore in 2000 and Bill Clinton in 1996. Among Democrats, 93% grade Obama’s campaign an A or B, virtually unchanged from 2008 (95%). Obama’s ratings among Democrats are higher than Clinton’s were for his reelection campaign in 1996 (82% A or B). 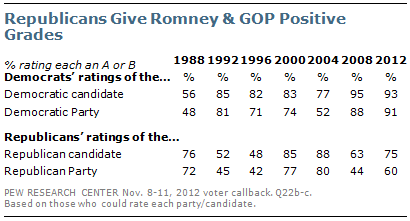 As is generally the case for the losing candidate, Romney receives lower marks than Obama; 45% give Romney an A or B for his campaign. Romney’s ratings are similar to those for John McCain in 2008, but higher than the grades for Bob Dole in 1996 and George H.W. Bush in 1992.

Three-fourths of Republicans (75%) say Romney earned an A or B for the way he conducted himself, which is 12 points more than the percentage of Republicans who gave McCain’s campaign A or B four years ago. Among Republican voters, Romney gets the highest ratings of any losing GOP candidate in the past 25 years.
The Democratic Party gets higher grades than the Republican Party; 54% of voters who rated the party give it an A or B, compared with 39% for the Republican Party. A majority of Republicans (60%) grade the GOP at A or B, which is higher than the 44% that gave top grades to the party after the 2008 election. Democrats give their party about as positive a rating as they did four years ago (91% A or B).

Ratings for other players in the campaign also are fairly low. Only about half (53%) of voters give “the voters” an A or B, far fewer than did so after any election since 1996. The losing party typically gives the voters lower grades than the victors, but Republicans’ grades for the voters are particularly low this year. Just 29% of Republicans give voters an A or B grade, compared with 51% of independents and 79% of Democrats. As a result, this is the largest partisan gap in evaluations of the voters since 1988. 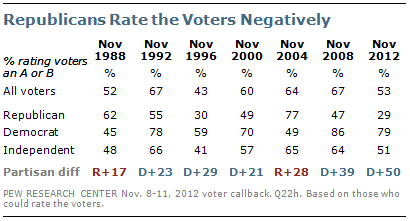 The press receives the lowest ratings of any of the campaign players included in the survey. Just 32% give the press an A or B grade for how they conducted themselves in the campaign. Only 19% of Republicans and 21% of independents give the press a positive rating, compared with 52% of Democrats. (For more on press coverage see Section 4.)

Voters Satisfied With the Candidates 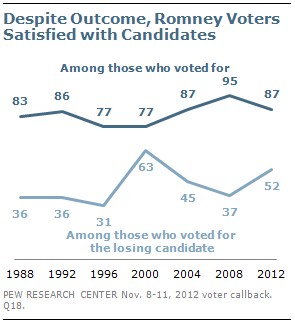 Most Voters Felt They Made Informed Choice

An overwhelming percentage of voters (87%) say they learned enough about the candidates and the issues to make an informed choice between Obama and Romney. Only 11% said they found it difficult to choose because they did not learn enough from the campaign. 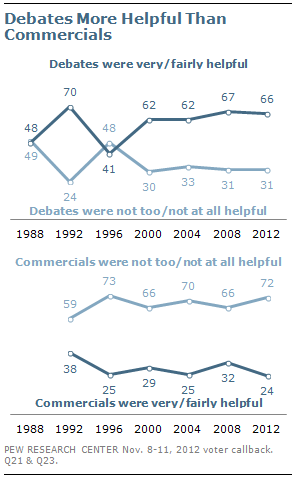 Similarly, 69% of Republicans and the same percentage of Democrats say the debates were very or somewhat helpful in deciding which candidate to vote for, as do 61% of independents. However, more Democrats (33%) than Republicans (18%) or independents (20%) say campaign commercials were helpful in making their choice. 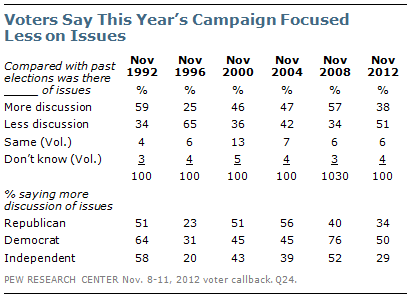 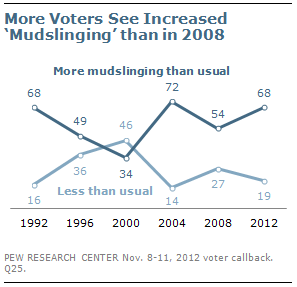 There is a modest partisan difference on evaluations of the negativity campaign; 73% of Republicans said there was more mudslinging in the past, compared with 63% of Democrats. Nearly seven-in-ten (69%) independents also said there was more negative campaigning than in past presidential elections.