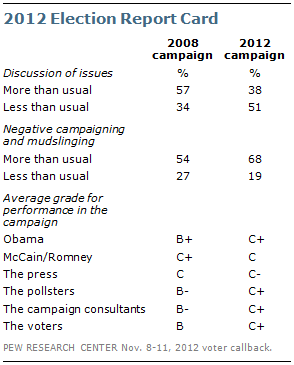 The 2012 presidential campaign was a frustrating experience for many voters, who say the campaign was more negative than usual and had less discussion of issues than in most previous campaigns. Both Obama and Romney get mixed grades for the job they did reaching out to voters, as do campaign consultants, the press and pollsters. On most measures, voters’ views of campaign 2012 fall short of the election four years ago.

Similarly, voters do not have a particularly rosy outlook on national politics going forward. Fully 66% say that relations between Republicans and Democrats will either stay about the same (52%) or get worse (14%) over the next year. And while 56% of voters think Obama will be successful in his coming term, that is 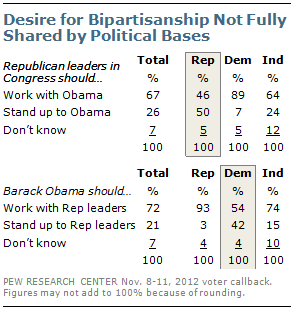 down from the 67% who thought his first term would be successful at this point four years ago.

While broad majorities of all voters want Barack Obama (72%) and the Republican leadership (67%) to work with the other side to get things done over the coming year, each party’s political base sends mixed signals. Only about half (46%) of Republicans want GOP leaders to work with Obama to get things done, while about as many (50%) say they should stand up to Obama, even if less gets done. The message to Obama from Democrats is only somewhat more conciliatory: 54% want the president to try to work with Republicans, but 42% do not.

Compare your views of the campaign and the election results to the opinions of other voters. 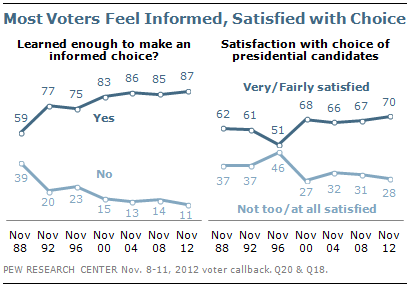 These are the principal findings of the Pew Research Center’s quadrennial post-election survey, conducted Nov 8-11, 2012 among 1,206 voters who were originally interviewed before the election. The poll finds that, despite expressing strong criticisms of the campaign, most voters say they were satisfied with the choice of presidential candidates and believe they learned enough about them over the course of the campaign to make an informed choice. The presidential debates, in particular, stand out as positive – about two-thirds (66%) say they were helpful in learning about the candidates.

Republican voters are about as likely as Democratic voters to say they learned enough about the candidates to make an informed choice and to have found the debates helpful. 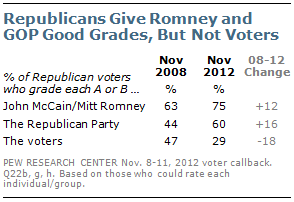 Republicans also are less critical of their candidate, and their party, today than they were after John McCain’s loss in 2008. Fully 75% of Republican voters give Mitt Romney a grade of A or B for the way he conducted his campaign. In the post-election survey four years ago, 63% of Republican voters gave McCain an A or B. In that regard, more GOP voters say they were satisfied with their choice of candidates this year than after the 2008 election (57% now, 38% then).

Republicans also are more positive about the GOP’s performance in the campaign. Six-in-ten GOP voters (60%) give their party grades of A or B for the way it conducted the campaign; just 44% rated the party that positively after the election four years ago.

But Republicans give the voters much lower grades than in 2008 – just 29% give a grade of A or B, down from 47%. In fact, Republicans’ grades for the voters equal the lowest grades given by members of either party dating back to 1988. In 1996, after Bob Dole lost to Bill Clinton, just 30% of Republicans gave the voters positive grades.

Election night is also a social experience for some voters: 16% of those who followed election returns did so with friends, while 8% used social networking sites like Facebook and Twitter to track the results. Obama supporters were more likely to watch returns with friends, and to use social networks to follow results, than were voters who supported Romney.
Aside from long lines, few voters report having had problems casting their ballots. Some 37% of the voters interviewed say they cast their ballot before Election Day, 19% in person and 17% by mail. Many early voters cite convenience as the main factor they cast their ballots early, but for those who went to early voting sites the lines were often just as long as for those who waited until Election Day.

Next: Section 1: Campaign Report Card
← Prev Page
You are reading page1Page2Page3Page4Page5Page6
Next Page →