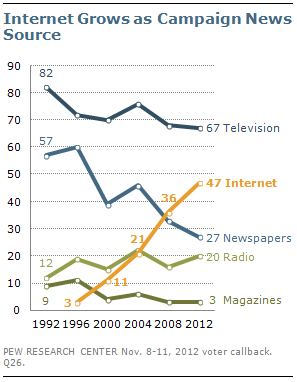 Television remains the leading source for news and information about the presidential campaign, but voters are increasingly turning to the internet for election coverage. Television plays an even more dominant role in election-night coverage: Virtually all voters who followed election returns watched on television. Even among the roughly third of voters who tracked election returns on the internet, most followed on TV as well. 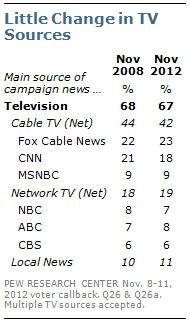 Among cable networks, 23% of voters name the Fox News Channel as a main source; 18% cite CNN and 9% MSNBC. There also is little change in the percentage naming any of these cable networks from 2008.

Since 2008, the percentage using the internet as a main campaign news source has increased 11 points, to 47%, making it the second most frequently used news source by voters. Nearly three-in-ten voters (27%) name newspapers, while 20% cite radio and 3% magazines.

About eight-in-ten (78%) voters say they followed election returns on the night of Nov. 6. Among 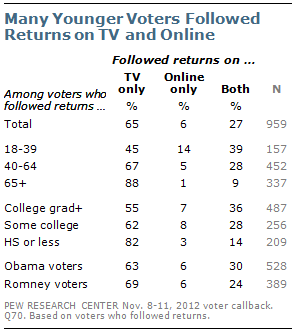 College graduates and those with some college experience are far more likely than those with no more than a high school education to say they followed election returns on both TV and the internet (36% and 28% vs.14%). 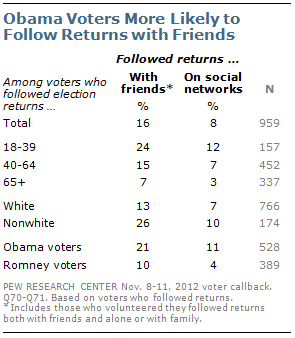 Views of the Press 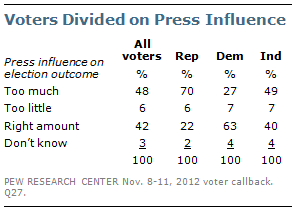 However, Republicans are far more likely to see unfair treatment of the candidates – 51% of Republicans say Obama’s campaign was covered unfairly while 69% say the press covered Romney’s campaign unfairly. 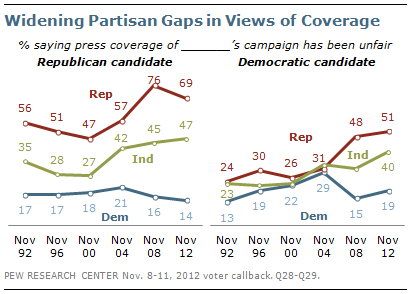 Low Marks for the 2012 Election Section 1: Campaign Report Card Section 2: Expectations for Washington, Obama’s Post-Election Image Section 3: The Voting Process and the Accuracy of the Vote
Section 4: News Sources, Election Night and Views of Press Coverage
Election Night ExperienceViews of the Press
About the Survey