Most voters offer a positive assessment of the voting experience, with relatively few criticisms aside from the occasional long lines at polling places. And most remain confident that their vote was accurately counted, and that the voting process in their area was managed well.

But the proportion of voters – both on the winning and losing side – expressing a high degree of confidence in the accuracy of the nationwide vote count has fallen significantly since 2008.

About one-in-ten voters (9%) say that someone they know tried to vote but was unable to do so. The percentage is somewhat higher among black voters (14%) and those younger than 30 (21%). When voters are asked why that person was unable to vote, no one reason stands out. Of note, very few cite Hurricane Sandy as the reason, and a similarly small number cites long lines at polling places. 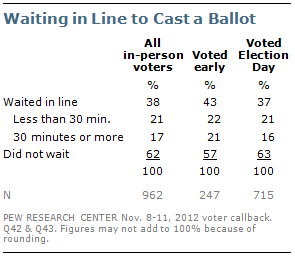 Of those who had to wait, about half say the wait was less than 30 minutes. Overall, 17% of in-person voters report having had to wait 30 minutes or more to cast a ballot. Those voting in person before 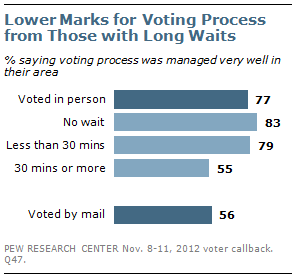 Election Day were about as likely to report having a long wait as those who voted on Election Day.

The Accuracy of the Vote 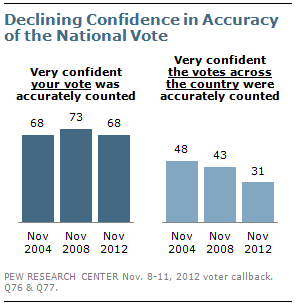 There has been little change in voters’ assessments of their own vote over the past decade; the 68% who are very confident their vote was accurately counted this year is comparable to the share of voters who said this after the 2004 election (68%), though is down slightly from 2008 (73%).

But confidence in the vote count nationwide has been slipping: Just 31% of voters this year say they are very confident the votes across the country were accurately counted, down from 43% after the 2008 election and 48% after the 2004 election.

About seven-in-ten (73%) Obama voters are very confident their vote was counted accurately, compared with 64% of Romney voters. This is similar to the pattern seen among Bush and Kerry voters in 2004, when supporters of Kerry, the losing candidate, were less confident that their vote was registered. Four years ago, there was no difference between Obama and McCain voters in confidence about this. 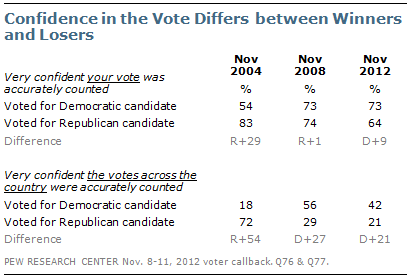 Early Voting Inches Up, But No Surge in 2012 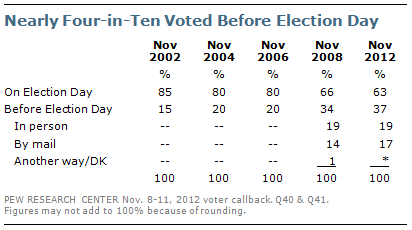 After a dramatic 14-point jump in 2008 in the proportion of voters casting a ballot before Election Day, the 2012 election saw only a modest change in early voting. Overall, 37% of voters say they voted early, compared with 34% four years ago. The same percentage as in 2008 reported voting early in person (19%), while 17% reported voting by

Obama’s and Romney’s supporters were about equally likely to vote before Election Day: 36% of Obama’s supporters say they voted early, compared with 39% among Romney’s voters.

There are significant geographic differences in whether voters cast their ballots early or on Election Day. About six-in-ten (59%) voters in the Western U.S. voted early; most of them voted by mail rather than in person. Early voting was popular in the South as well, where 44% cast their vote before Election Day. 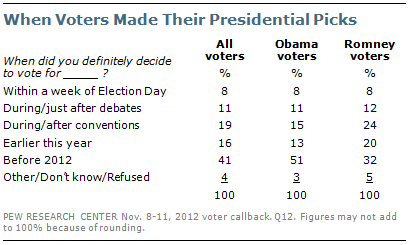 on the outcome of the election. For all the attention paid to the hurricane and President Obama’s handling of its aftermath, just 8% of voters say they made up their mind within a week of the election, and these late deciders made up the same share of each candidate’s supporters.

Few Get Political Messages at Church

Among voters who attend religious services at least once a month, 13% say information on political parties or candidates for the election was made available in their place of worship. This is comparable to the percentage receiving such information in 2008 (15%), and is lower than the percentage in 2004 (27%). 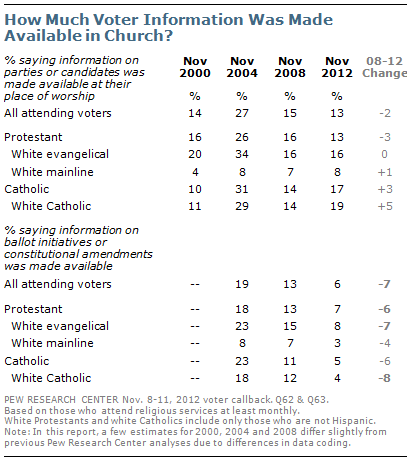 Far fewer voters had information on local ballot initiatives or constitutional amendments available in their places of worship.

Among all voters who attend religious services at least once a month, only 6% say information on ballot initiatives or constitutional amendments was made available in their places of worship, down from 13% in 2008 and 19% in 2004. 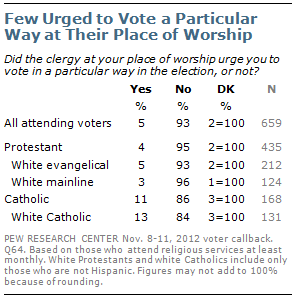 Catholic voters who attend church regularly are more than twice as likely as Protestants to report being urged to vote a certain way. (11% vs. 4%). Among white Catholics, 13% say they were urged to vote a particular way by their clergy, compared with 5% of white evangelical Protestants and 3% of white mainline Protestants. 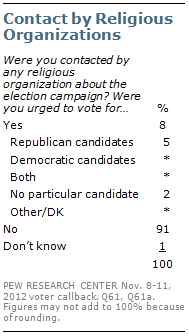 Overall, 8% of voters say they were contacted by any religious organization about the election campaign, about the same as during the 2010 election cycle (6% of registered voters). More voters who were contacted by a religious organization were encouraged to vote for Republican candidates (5% of all voters) than for Democratic candidates (less than 1%).[1. A similar question asked in previous Pew Research Center surveys, about being urged to vote by clergy or other religious groups, found the same pattern. In 2000, 2004 and 2008, more Catholics than Protestants report being urged to vote a certain way by clergy or other religious organizations (see https://www.pewresearch.org/politics/2008/11/13/high-marks-for-the-campaign-a-high-bar-for-obama/).

Low Marks for the 2012 Election Section 1: Campaign Report Card Section 2: Expectations for Washington, Obama’s Post-Election Image
Section 3: The Voting Process and the Accuracy of the Vote
The Accuracy of the VoteEarly Voting Inches Up, But No Surge in 2012Few Get Political Messages at Church
Section 4: News Sources, Election Night and Views of Press Coverage About the Survey