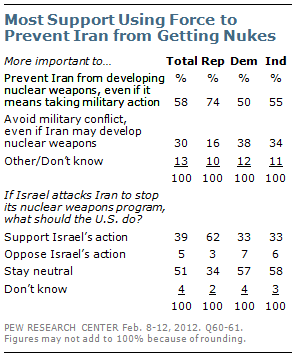 There have been reports in recent weeks that Israel may soon attack Iran’s nuclear facilities. About half of Americans (51%) say the United States should remain neutral if Israel takes action to stop Iran’s nuclear program, but far more say the U.S. should support (39%) than oppose (5%) an Israeli attack.

The latest national survey by the Pew Research Center for the People & the Press conducted Feb. 8-12, 2012, among 1,501 adults, finds substantial partisan differences over how to deal with Iran’s nuclear program.

Republicans are far more supportive of using military force to prevent Iran from developing nuclear weapons than are either Democrats or independents. Moreover, a majority of Republicans (62%) say the U.S. should support an Israeli attack to stop Iran’s nuclear program, compared with just a third of independents and Democrats. 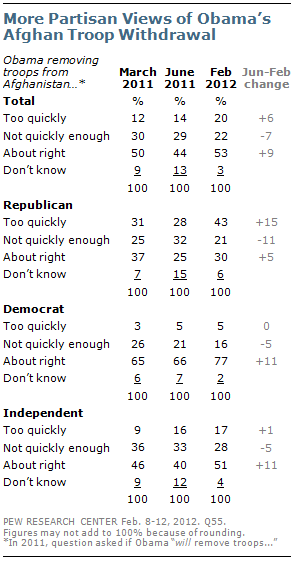 Last June, 44% said they thought Obama would handle the troop withdrawal about right, and 50% expressed this view in March 2o11.

An overwhelming majority of Democrats (77%) continue to say Obama is handling the troop withdrawal about right, an increase of 11 points from June 2011.

Similarly, about half of independents (51%) think the president is handling the withdrawal of troops from Afghanistan about right, up from 40% in June. About a quarter (28%) of independents say Obama is not removing troops quickly enough and 17% say he is removing them too quickly.

About half of Americans (51%) say the U.S. should stay neutral if Israel attacks Iran. 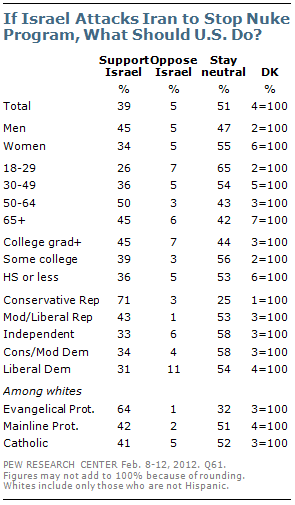 Fully 64% of white evangelical Protestants say that the U.S. should support Israel if it attacks Iran in an effort to stop their nuclear weapon program. That compares with 42% of white mainline Protestants and 41% of white Catholics.

Most See Tougher Sanctions as Ineffective 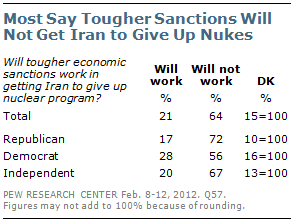 give up its nuclear program. Just 21% think they will work. In October 2009, 56% thought tougher economic sanctions would not work in stopping Iran’s nuclear weapons program.

An overwhelming majority of Republicans and Republican-leaning independents who agree with the Tea Party (84%) say that the U.S. should prevent Iran from developing nuclear weapons, even if it means taking military action. That compares with a smaller majority (64%) of Republicans who disagree with or have no opinion of the Tea Party.

Most Would Use Force to Stop Iranian Nukes
Public Remains Supportive of Israel, Wary of Iran
Little Support for U.S. Intervention in Syrian Conflict
Iran a Growing Danger, Bush Gaining on Spy Issue
On Eve of Foreign Debate, Growing Pessimism about Arab Spring Aftermath
Defining generations: Where Millennials end and Generation Z begins
Quiz: Are you a Core Conservative? A Solid Liberal? Or somewhere in between?
Key findings about U.S. immigrants
About One-in-Four U.S. Hispanics Have Heard of Latinx, but Just 3% Use It
Views on Race in America