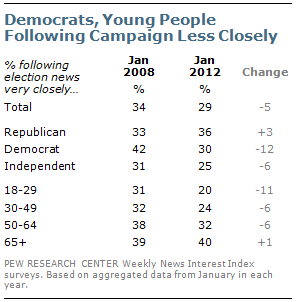 The 2012 presidential campaign is drawing significantly less interest than the 2008 campaign from Democrats and younger people. According to the Pew Research Center’s News Interest Index surveys over the course of January, 30% of Democrats have been following election news very closely, down from 42% in January 2008, during the primary contest between Barack Obama and Hillary Clinton. By contrast, Republican interest has changed little since 2008 (36% very closely now, 33% then).

The 2012 campaign also is attracting less interest from young people. So far this year, only 20% of people under age 30 have been following news about the campaign very closely. That compares with 31% four years ago. Interest is down slightly among those ages 30 to 64, and has held steady among older Americans. This year, people age 65 and older are twice as likely as those under 30 to be closely following the election (40% vs. 20%). Four years ago, there was only a small gap between the interest of younger and older Americans. 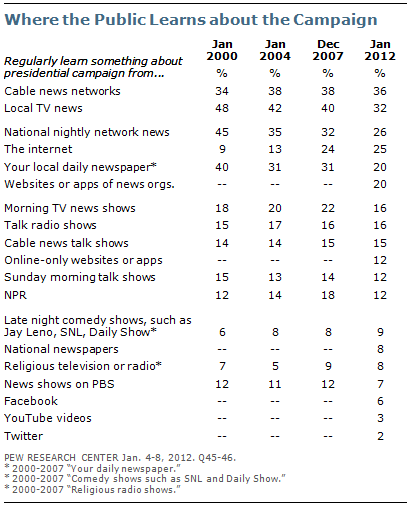 newspapers – fell between 2000 and 2004 but stabilized during the 2008 campaign, which attracted considerable public interest. The new survey finds further declines in the numbers saying they regularly get campaign news from these traditional sources.

During the 2000 campaign, local television (48%), nightly network news (45%) and daily newspapers (40%) were the public’s leading regular sources for campaign news. At that time, the audiences for all three surpassed the number who regularly said they got campaign news from cable news networks.

Yet cable news has maintained its campaign news audience over the last dozen years and now ranks as the top regular source for campaign news and information. Currently, 36% say they regularly learn about the campaign from cable news networks, which is little changed from the three previous presidential campaigns.

A quarter of Americans (25%) say they regularly learn something about the campaign from the internet, which is virtually unchanged from 2008 (24%). Between 2000 and 2008, the number relying on the internet for campaign news increased from 9% to 24%.

When it comes to specific internet sources, relatively few say they are regularly learning about the campaign from Facebook (6%), YouTube videos (3%) or Twitter (2%). Instead, the more common sources of campaign news online are the websites or apps of television, radio, newspaper or magazine news organizations (20%) and online-only sites and apps (12%).

Reflecting their lack of interest in the 2012 campaign generally, young people are significantly less likely to say they are learning about the campaign from the internet than four years ago. Just 29% of those younger than 30 say they regularly learn about the candidates and campaigns online, compared with 42% early in the 2008 campaign. The web has grown as a source for those in older age groups, though not those ages 50 to 64.

The internet is not the only campaign news source that young people are using less. Compared with four years ago, half as many 18-to-29-year-olds regularly learn about the campaign from daily newspapers (11% down from 25%) and network evening news (12% down from 24%). Fewer young people also are getting campaign news from local television news.

Meanwhile, cable news has grown to be the top source partly by expanding its reach among older Americans. In 2000, barely a third (34%) of people age 65 and older said they regularly got campaign information from cable networks. That put cable far behind local television news (59%), daily newspapers (58%) and nightly network news (56%) among those in this age group. 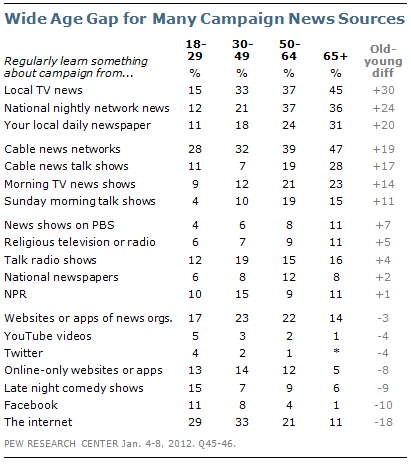 The top campaign news sources for those younger than 30 continue to be the internet and cable news networks. Still, only about three-in-ten regularly learn something about the campaign from these sources (29% internet, 28% cable).

The next most common sources for younger Americans are local television news and late night comedy shows, cited as regular sources of campaign information by 15% each. In fact, aside from the internet and other online sources, late night comedy shows are the only campaign news source tested that young people turn to more than older people.

People age 65 and older are three times as likely as those younger than 30 to regularly learn about the election from local television news (45% versus 15%) and nightly network news (36% versus 12%), and the gap is almost as large for local daily newspapers (31% versus 11%). 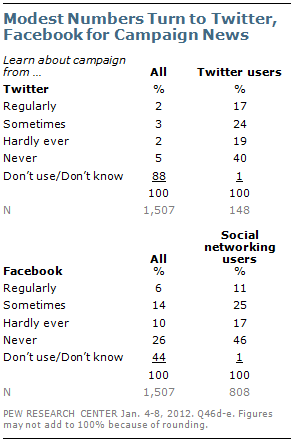 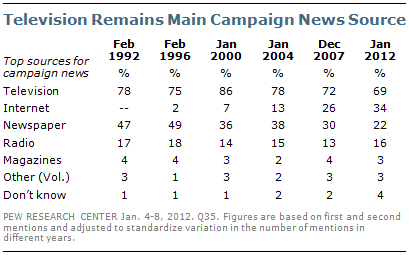 The survey includes a measure of where people get most of their news about the presidential election campaign, as well as asking about the news sources they regularly use. 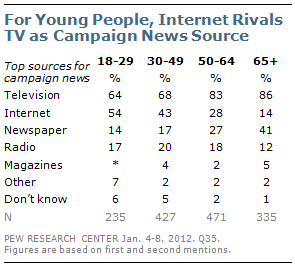 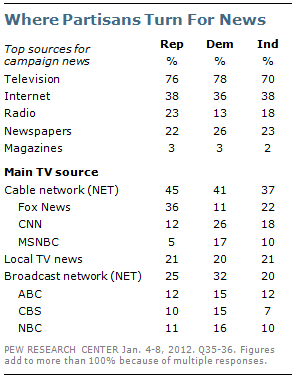 Cable television news is a main campaign news source for 45% of Republicans, 41% of Democrats and 37% of independents. But they turn to different cable networks. Republicans are far more likely to count on Fox News (36%) for campaign information than are Democrats (11%). Democrats are much more likely than Republicans to rely on CNN (26% vs. 12%) and MSNBC (17% vs. 5%).

Those who get news online tend to rely on the websites or apps of news organizations and search engines or aggregators. Almost a quarter cite CNN (24%) and nearly as many (22%) point to Yahoo. Google (13%) and Fox also are popular (10%). Facebook was mentioned by 5% of internet news users, as many as cited the New York Times. Twitter was named by 2% of internet news users.

Young adults list many of the same sites as those who are older: Among those younger than 30 who use the internet to get news, CNN, Yahoo and Google are among their top online sources of campaign information. Facebook is offered by 8% of young people and Twitter by 4%.