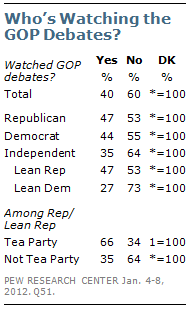 When the survey was in the field in early January (Jan. 4-8), there had already been 13 debates among the GOP candidates, and another two occurred while the survey was taking place. Four-in-ten (40%) Americans say they have watched one or more of these debates.

By the end of 2007, Republican candidates had held a comparable number of debates, but only 33% of the public had watched. The Democratic debates drew more interest that year, with 40% saying they had watched any of those debates.

Nearly half (47%) of Republicans have seen a debate during the current campaign, up from 32% at the same point in the 2008 campaign. Among Republicans and Republican-leaning independents who agree with the Tea Party, fully 66% have seen a GOP debate. 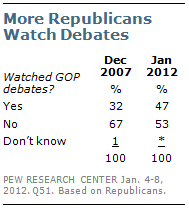 Democrats also are more interested in the Republican debates than they were four years ago; 44% have seen a GOP debate, up from 34% in late 2007. Democrats are about as likely to have seen one or more GOP debates during this campaign as to have watched a Democratic debate four years ago (46%).

Among Americans who have watched the debates, 38% say they have learned a lot about the candidates from them, including 44% of Republicans and 35% of both Democrats and independents.

While the internet gives campaigns new tools for reaching out to potential voters, the campaign tactics that have the broadest reach are some of the most traditional in nature. About seven-in-ten voters (72%) say they have seen or heard campaign commercials, and 21% have received mail about the candidates or campaigns. Roughly a quarter (26%) have received phone calls about the candidates or campaigns, with pre-recorded calls outpacing calls from staffers or supporters by three-to-one (25% have received robocalls, 8% live calls).

Fewer than one-in-five voters (16%) have received email about the candidates from the campaigns or political groups, and about the same number (15%) have visited campaign websites. And while all the major candidates have ways in which voters can follow or receive updates from candidates through Facebook or Twitter, only 6% of registered voters in the country have done so.

Democratic and Democratic-leaning voters (10%) are twice as likely as Republican and Republican-leaning voters (5%) to have made donations during this presidential campaign. This is largely unchanged for Democrats from four years ago, but self-reported donations by GOP voters have dropped from about this time four years ago (10% in November 2007).