In the wake of Iran’s recent threats to block the Strait of Hormuz and the tightening of economic sanctions by Western nations, most Americans say they have heard a lot (42%) or a little (41%) about the recent tensions. And Iran has now risen to the top of the nations the public says represent the greatest danger to the U.S.: Nearly three-in-ten (28%) volunteer Iran when asked this question. 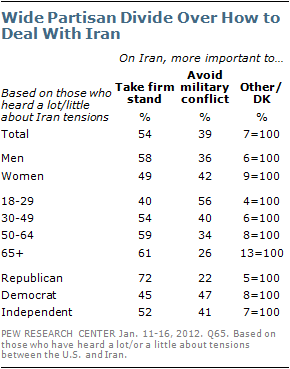 Among those who are aware of the recent tensions between the U.S. and Iran over Iran’s nuclear program and disputes in the Persian Gulf, a majority say that it is more important to take a firm stand against Iranian actions (54%) than to avoid a military conflict with Iran (39%). More than seven-in-ten Republicans (72%) say taking a firm stand is more important, as do a smaller majority (52%) of independents.

There also is a sizable age gap in opinions about how to deal with Iran. Among those under 30 who have heard about recent U.S.-Iran tensions, 56% say it is more important to avoid a military conflict with Iran. Majorities in older age groups – including 61% of those 65 and older –say it is more important to take a firm stand against Iranian actions.

When asked which country represents the greatest danger to the U.S., more Americans volunteer Iran (28%) than name any other country, though nearly as many (22%) name China. North Korea (8%), Iraq (7%) and Afghanistan (5%) are mentioned by smaller proportions of the public.

The percentage naming Iran has more than doubled since last January (from 12% then to 28% today); opinions today are on par with those in 2006 and 2007. Compared with last year, fewer now cite North Korea as the most dangerous nation (8% today, 18% then), while about as many say China as did so last January (22% today, 20% last year).

Republicans view Iran as the country that poses the greatest danger to the United States: 42% name Iran, compared with 23% who name China and 9% who say North Korea
By contrast, Iran and China are cited about equally by Democrats (24% and 20%, respectively) and independents (25% each).

Little Change in Views of Afghanistan 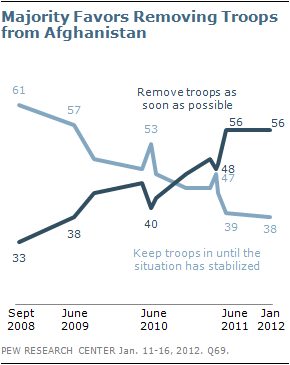 A majority (56%) says U.S. troops should be brought home from Afghanistan as soon as possible; 38% say troops should remain there until the situation has stabilized. Public views about the draw-down of U.S. forces are nearly identical to June, although this represented a stark shift from past years.

The public also continues to say the effort in Afghanistan is going at least fairly well (55%), with Republicans (62%) and Democrats (55%) about equally likely to say it is going well. Independents offer less positive assessments (51% very or fairly well, 42% less well). 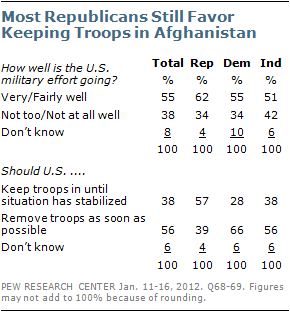 There continue to be wide partisan differences over whether to keep U.S. troops in Afghanistan until the situation has stabilized or bring them home as soon as possible. A majority of Republicans (57%) say troops should remain in the country until the situation has stabilized. Two-thirds of Democrats (66%) and 56% of independents say troops should be removed as soon as possible. These patterns are little changed from June.

Can a Smaller Military Do The Job? 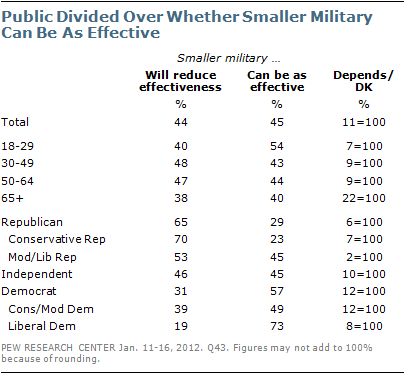 Roughly two-thirds of Republicans (65%) say troop cuts will reduce effectiveness, compared with 46% of independents and just 31% of Democrats. There are substantial differences within partisan groups: While nearly three-quarters of liberal Democrats (73%) say a smaller military would be just as capable, conservative and moderate Democrats are more evenly split (39% less effective, 49% as effective).

Conversely, while moderate and liberal Republicans are split on the question, seven-in-ten conservative Republicans (70%) say downsizing military will diminish its effectiveness. 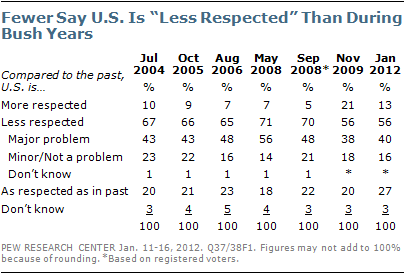 A 56% majority of Americans say the U.S. is less respected now than it was in the past. This is unchanged from November of 2009, and remains a more positive assessment of foreign impressions than throughout the later years of George W. Bush’s administration. At the same time, the percentage saying the U.S. is more respected than in the past has declined over the last two years (from 21% to 13%), with a comparable rise in the proportion saying the country is as respected as it had been (from 20% to 27%).