The nation’s worst economic meltdown since the Great Depression has had a disproportionate impact across generations. While Americans of all ages have felt the effects of the recession, Millennials have been hit harder on the job front, and Boomers and Generation Xers have suffered the greatest losses in terms of home values, household finances, and retirement savings. The Silent generation has survived the economic downturn in better shape. With the help of income from Social Security, Silents view their financial situations more positively than do younger generations.

Moreover, a report by the Pew Research Center’s Social & Demographic Trends project shows that Americans 65 and older have made dramatic gains relative to younger adults in their overall economic well-being over the past quarter of a century. (For more, see Pew Social & Demographic Trends’ “The Rising Age Gap in Economic Well-Being,” Nov. 7, 2011.) 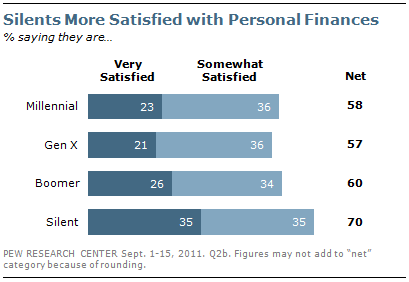 In the current poll, Silents express a higher level of satisfaction with their personal financial situation than do younger people. Seven-in-ten Silents say they are satisfied with their current finances (35% are very satisfied, another 35% are somewhat satisfied).

In a survey last year by Pew Social & Demographic Trends, nearly half of the public (48%) said that their household finances were in worse shape than before the recession. Boomers suffered the most in this regard: More than half of Boomers (54%) said their household finances gotten worse over the course of the recession, with as many as one-in-five saying their finances were in much worse shape. Among Silents, 44% said they were in worse financial shape as a result of the recession, but just as many volunteered that their finances had not changed during the recession.

Millennials, despite their precarious situation in the job market, were more likely than any other generation to say their finances had improved over the course of the recession (33%). Gen Xers said they suffered more than Millennials but slightly less than Boomers. (For more, see Pew Social & Demographic Trends’ “How the Great Recession Changed Life in America,” June 30, 2010.) 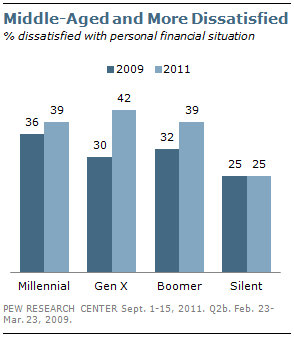 More Boomers also express dissatisfaction with their finances: 39% are currently dissatisfied, compared with 32% two years ago. Millennials’ views of their personal finances, like those of Silents, have changed very little since 2009.

The increased anxiety about personal finances among Gen Xers and Boomers may be fueled in part by mounting concerns about retirement savings. Although the stock market has rebounded somewhat from its low point in early 2009, Americans have less confidence now than they did in early 2009 in their ability to provide for themselves in retirement. In 2009, roughly seven-in-ten adults were at least somewhat confident that they would have enough income and assets to last throughout their retirement years. In the current poll, 63% expressed at least some confidence. 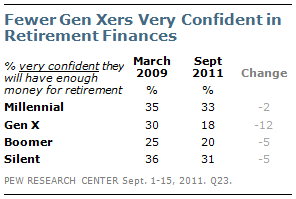 Over the past two years Gen Xers have lost a great deal of confidence in their ability to provide for themselves in retirement. In the current survey, only 18% of Gen Xers say they are very confident they will have enough income and assets to last throughout their retirement years, down from 30% who were very confident in just two years ago. 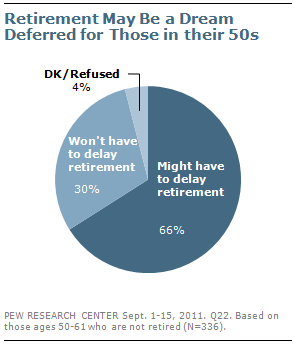 Retirement is still a long way off for most Gen Xers, but it is right around the corner for many Boomers. In the current survey, about two-thirds of Boomers (67%) say they are not retired. Among that group, the average age at which they expect to retire is 66. Nearly one-in-four (23%) say they expect to work until they are 70 or older, and 12% say they never plan to retire.

The recession has had a major impact of some Boomers’ retirement plans. Among Boomers ages 50-61 who are still in the labor force, fully two-thirds (66%) say they might have to delay their retirement because of current economic conditions.

The vast majority of Silents are already retired – 90% in the current survey. A small share of Silents and Boomers who are retired report that they still do some type of work for pay. Among older Boomers and Silents who are not yet retired, 42% say they already have had to delay their retirement because of the economy.

The collapse in the housing market has had relatively little impact on Millennials, largely because they are less likely than older Americans to own a home. In a Pew Research survey conducted earlier this year, only 18% of Millennials reported that they owned their own home.

The share of homeowners among Gen X is much higher – 57%. And among Gen Xers who own homes, three-in-four say they bought their home in 2000 or later, during the dramatic rise and fall in home values. One-in-four of these homeowners say their house is worth a lot less than it was before the recession, and 21% say they are underwater on their mortgage – that is, they owe more on their home than they could sell it for today. 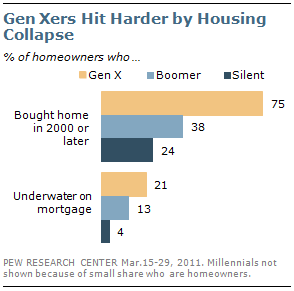 Boomers are more likely than Gen Xers to own a home (75%), but they are less likely to have bought their home during the real estate bubble of the past decade. Fewer Boomers than Gen Xers (13%) say that they are underwater on their mortgages.

Silents – the vast majority (82%) of whom are homeowners – are even more removed from the housing crisis. Only 24% of homeowners from the Silent generation bought their home in the past decade; twice as many (50%) bought their home before 1990. Just 4% of Silents report that they are underwater on their mortgages. (For more, see Pew Social & Demographic Trends’ “Home Sweet Home. Still.” April 12, 2011.)

Finding a job during the recession has been a challenge for Americans of nearly all ages, but Millennials have been hit particularly hard. Over the course of the recession, the overall unemployment rate increased by roughly five percentage points. The increase was sharpest among the nation’s youngest workers. Pew Social & Demographic Trends’ 2010 report on the differential impact of the recession showed that 19.1% of workers ages 16 to 24 were unemployed in the fourth quarter of 2009, according to the Bureau of Labor Statistics. That was eight points higher than the unemployment rate for this age group in the fourth quarter of 2007. Both the levels and changes in the unemployment rate were less sizable among older age groups. 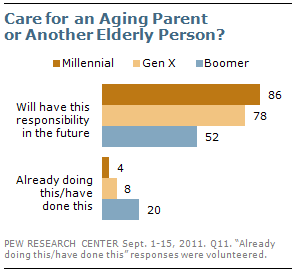 In addition to the broader economic forces that have battered Americans over the past few years, there are other financial burdens and responsibilities closer to home. Many parents and children feel a sense of financial obligation to each other. With the population growing older, the need for family members to provide assistance to one another may increase.

Roughly six-in-ten Americans (62%) think that at some point in their life they will be responsible for caring for an aging parent or another elderly person. Another 13% volunteer that they are currently caring for an aging adult or have done so in the past. 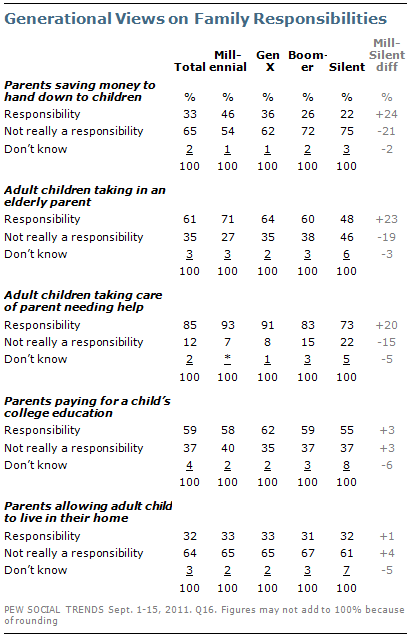 Large majorities of Millennials (86%) and Gen Xers (78%) say they think they will end up caring for an aging parent or another elderly person. Fewer Boomers (52%) expect to care for an aging adult, but 20% say they currently do so or already have done so.

There are wide generational differences in opinions about the responsibilities of family members to each other. On issues relating to aging parents, Millennials advocate a greater level of responsibility on the part of both the parents and the adult children than do older generations.

There is much more agreement across generations on the two additional items tested in the poll. Most adults, regardless of generation, agree that parents should pay for a child’s college education. Roughly six-in-ten Millennials, Gen Xers, Boomers and Silents say this is a responsibility.

Whether or not it is viewed as a responsibility, many families are living together in multi-generational households these days. A recent Pew Research analysis of data collected by the U.S. Census Bureau showed that a record share of Americans now reside in a multi-generational household and that, for many, this has become an economic lifeline. An earlier Pew Research analysis showed that during the recession, many Millennials moved back in with their parents (as many as one-in-four adults ages 18-24 did this). (For more, see Pew Social & Demographic Trends’ “Fighting Poverty in a Bad Economy, Americans Move in with Relatives,” Oct. 3, 2011.)

Within families, generations support each other financially – and the support runs both ways. Among adults who have a parent age 65 or older, 39% say they have given financial support 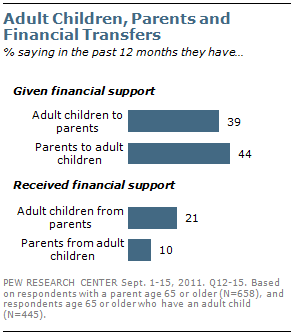 to their parent in the past 12 months. Among adults ages 65 and older, a similar share (44%) say they have given financial support to an adult child.

The share of adult children who have provided financial support for an elderly parent is significantly higher among blacks and Hispanics than among whites. Fully 64% of black and Hispanic adults with a parent or parents age 65 or older say they have given their parents money in the past year. Among non-Hispanic whites with a parent age 65 or older, only 30% have given money to a parent.

Next: Section 6: Generations and Entitlements
← Prev Page
Page1Page2Page3Page4Page5You are reading page6Page7Page8Page9Page10
Next Page →