The age gap in voting, which began to open in the 2004 election and became a major factor in Barack Obama’s 2008 victory over John McCain, is not the political norm. In fact, for most of the past four decades, there was little difference in the voting preferences of younger and older Americans. As recently as the 2000 election, younger and older voters – as well as those in-between – were virtually indistinguishable. 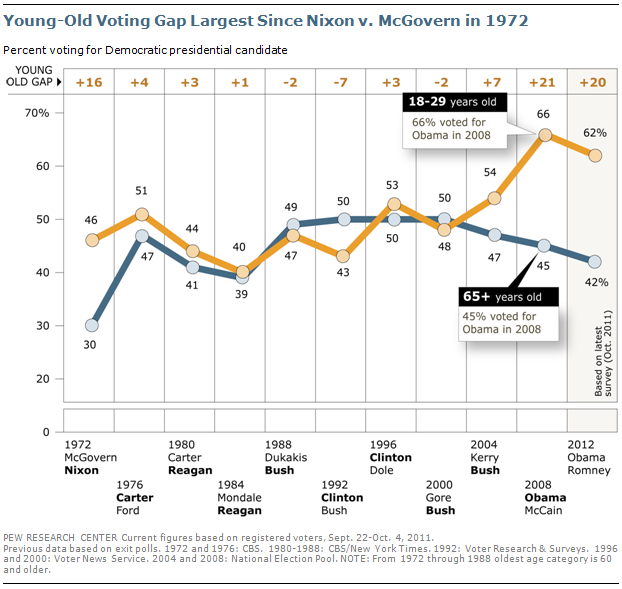 Going back 20 years to the 1992 election, younger generations were less likely than seniors to vote Democratic. This partly reflects Ross Perot’s independent appeal, but also the Republican leaning of the early Generation Xers who came of age under Ronald Reagan. The last time age correlated as strongly with Democratic voting as it has in recent years is the 1972 matchup between George McGovern and Richard Nixon, when 18-to-29-year-old voters were 16 points more likely to back the Democrat than were older voters.

Since his 2008 victory, Obama’s support has slipped across all generations, but the age gap has not narrowed. He continues to hold a substantial edge among 18-to-29-year-old voters, while voters age 65 and older currently favor Romney by a slightly larger margin than they backed McCain.

And these shifts have clear partisan implications – it is the younger Democrats who are the most disengaged, while attention among the older Republicans has surged. 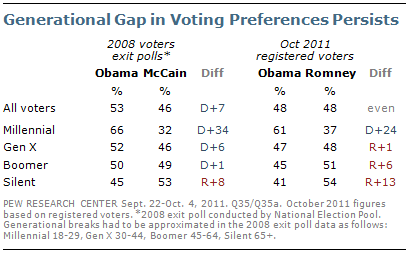 As voters look toward the 2012 general election, the generational differences that came to the surface in recent election cycles appear to be just as strong. Among all registered voters nationwide, Obama and Romney, who has run strongest against Obama in many polls, are tied: 48% say they would back each at this point. But across generations, Millennial voters (ages 18 to 30) favor Obama by a 61% to 37% margin, while Silent voters (ages 66 to 83) favor Romney by 54% to 41%. The 20-point gap in support for Obama (61% among Millennials vs. 41% among Silents) is almost identical to the 21-point generation gap in the 2008 National Election Pool exit polls, when 66% of younger voters backed Obama, compared with 45% of older voters.

Obama’s support has slipped by similar margins across all generations compared to when he defeated McCain. This erosion of support has particular implications for balance of support among the two middle-aged generations. Generation X voters (ages 31 to 46 today) voted for Obama over McCain by 52% to 46% in 2008, but are split evenly now (47% Obama, 48% Romney). Baby Boomers (ages 47 to 65) split their vote evenly in 2008, but Romney now holds a six-point edge among these voters today. 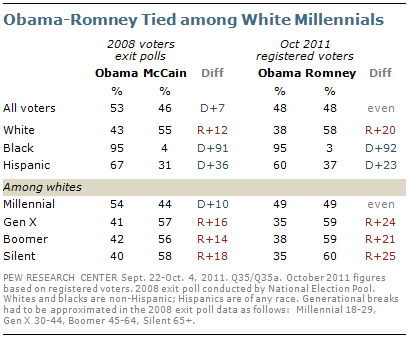 The racial and ethnic diversity of Millennials and Generation X plays a role in these generational gaps. Overall, fully 95% of African-American voters, and 60% of Hispanic voters, say they would vote for Obama over Romney; both groups overwhelmingly supported Obama over McCain in 2008. The critical shift between 2008 and 2012 is among white voters, who tend to be older. Romney holds a 20-point lead over Obama among non-Hispanic white voters (58% to 38%). Whites favored McCain over Obama in 2008 by a 12-point margin (55% to 43%). 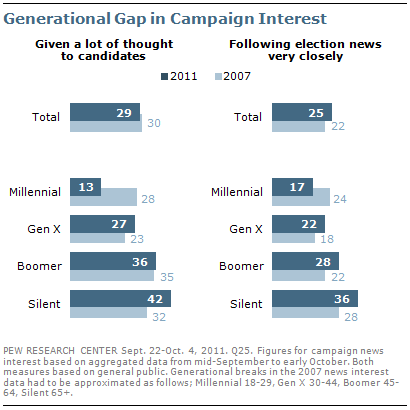 But because of a steep drop in attention among younger people and a notable increase in attention among older people, there is a wide generational gap in attention to the campaign that was not present in 2007. Just 13% of Millennials have given a lot of thought to the 2012 candidates, down from 28% four years ago. And 17% are following election news very closely, down from 24% in the fall of 2007.

Meanwhile, fully 42% of Silents have given a lot of thought to the candidates running for president, up 10 points from four years ago. And the Silent generation is also following election news more closely than in 2007 – 36% are following very closely now, up from 28% in 2007.

So far this cycle, Silents are three times as likely as Millennials to say they have given a lot of thought to the campaign (42% vs. 13%), and twice as likely to be following election news very closely (36% vs. 17%). On both measures, there was very little difference across generations four years ago. 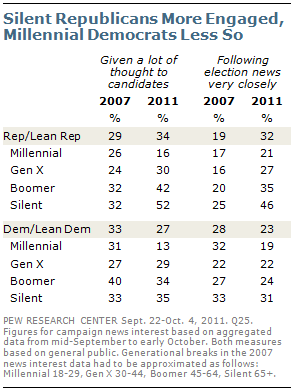 The increased attention among Republicans is in large part driven by the intense interest of older generations. About half (52%) of Republican and Republican-leaning Silents have given a lot of thought to the candidates. That is 20 points higher than in October 2007. There has been a similar shift among GOP Silents in the percentage following election news very closely – from 25% in 2007 to 46% currently. Baby Boomer Republicans also have given more thought to the candidates and are following campaign news more closely now than at a similar point in 2007.

Meanwhile, the drop in Democratic engagement is driven predominantly by the relative disinterest of Millennial Democrats this year. Just 13% of Democratic and Democratic-leaning Millennials have given a lot of thought to the candidates, down from 31% in 2007. And they are following campaign news less closely now than at a similar point in 2007 (19% now, 32% in 2007). All other generations of Democrats are following the campaign about as closely today as they were four years ago.

The lack of attention among Millennial Democrats may simply reflect the fact that there is only a GOP primary this year. Moreover, it is still very early in the campaign cycle and these dynamics may change. 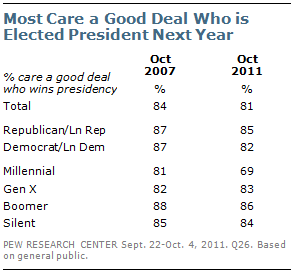 However, there are signs that the fundamental imperative to vote that Millennials felt in 2008 may be less intense in 2012. The share of Millennials
who say that they personally care a good deal who wins the 2012 presidential election stands at 69%, down from 81% four years ago. All older generations are far more likely to say the election outcome matters to them personally, with no slippage from four years ago.

And there is some evidence that Millennials feel more disillusioned about the impact of their vote now than in the days after Obama’s victory. In April 2009 – three months after Obama took office – 73% of Millennials agreed with the statement “Voting gives people like me some say about how the government runs things.” That has slipped to 63% today. Over that same stretch, the share of Millennials saying “Elected officials in Washington lose touch with the people pretty quickly” jumped from 67% to 78%. On both questions, other generations have not moved. 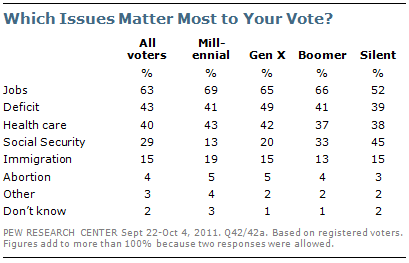 Jobs top the list of issues that matter most in deciding which presidential candidate to vote for next year – 63% of voters say jobs is one of the issues that will matter most in their vote. About four-in-ten say the budget deficit (43%) or health care (40%) will matter most. Fewer (29%) report that Social Security will be one of the most important issues to their vote next year. Just 15% of voters say immigration and only 4% report abortion will be among the most important issues to their vote.

Jobs lead the list across all generations. About two-thirds of Millennials, Generation X and Boomers say jobs will be the most or second-most important issue to their vote. Fewer Silent voters (52%) report that jobs will matter most. 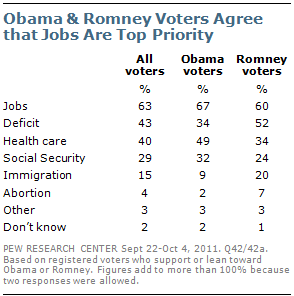 Gen Xers are more likely than older voters to cite the budget deficit as an issue that matters most to them. About half (49%) of Xers say the deficit is a top issue in their vote.

Size of Government and 2012 Voter Preferences

While the job situation is a nearly universal priority in 2012, one of the largest factors shaping voter preferences at this early stage in the campaign is views about the size of government. They are more closely related to voter’s preferences for president in 2012 than opinions about social issues, trust and frustration with government, views on immigration, racial attitudes and opinions about entitlement reform.

This pattern holds across all of the generations, and the differences are particularly large among the Boomer and Silent generations, the groups most likely to prefer a smaller government. Among Millennials, the only group in which more prefer a bigger government than a smaller one, the gap is somewhat narrower.

Next: Section 3: Views of Obama and the Political Parties
← Prev Page
Page1Page2You are reading page3Page4Page5Page6Page7Page8Page9Page10
Next Page →