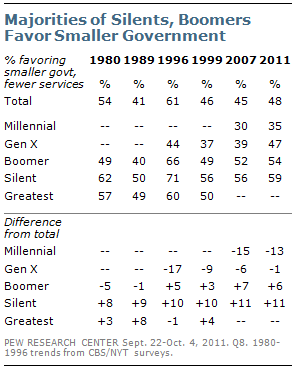 For most of their adult lives, members of the Silent generation have been one of the more conservative generations with respect to their view of the role of government. At least as far back as 1980, when Silents were between the ages of 35 and 52, and in the years since, they have generally been more likely than younger generations to say they prefer a smaller government providing fewer services rather than a bigger government providing more services.

Millennials are at the other end of the spectrum; most favor a bigger government; just 35% prefer a smaller government. And over the last few decades, the relative position of Boomers has shifted in a conservative direction. In 1980, when the oldest Boomers were 34, they were slightly more supportive of bigger government than the rest of the country. But by 1996, when the oldest Boomers were 50, they had become more supportive of smaller government than average. That pattern has continued.

Generation X also has shifted in a less liberal direction. In 1996, when the oldest Gen Xers were 31, they were substantially more supportive of a bigger government than the rest of the country. But today, the balance of opinion among Gen Xers is almost identical to that of the nation at large. 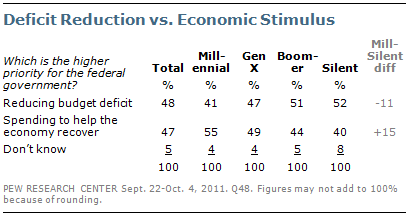 The public is equally divided about how the government should address the current economic situation: 48% say reducing the deficit should be the more important priority, while 47% put a higher priority on spending to help the economy recover. In keeping with their broader values about government, the generations differ on this fundamental question. Millennials put economic stimulus (55%) ahead of the deficit (41%), while Boomers and Silents tend to prioritize deficit reduction over stimulus spending. Gen X is about evenly divided on this issue. 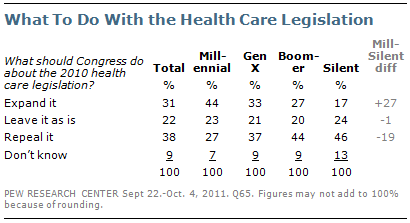 The public is also divided over what to do with the health care reform legislation that became law in 2010. Fully 38% want to repeal it, but another 31% want to see the law expanded. Only about one-in-five (22%) want to leave it as is.

Overall, the Silent generation is the least supportive of the health care law, with nearly half (46%) favoring repeal and just 17% saying the law should be expanded. Boomers express similar views with 44% favoring repeal and 27% expansion. Gen X’s attitudes mirror those of the general public, with 37% calling for repeal, 33% calling for expansion and 21% saying the law should be left as is. Millennials are most likely to favor expansion of the law (44%) and least likely to favor its repeal (27%).

The generation gap on this issue is not new. Just prior to the law’s passage in the spring of 2010, Silents were the least likely to favor it. After passage, just a third of Silents (33%) and Boomers (34%) approved, compared with 43% of Xers and 53% of Millennials.

Most See Government as Inefficient 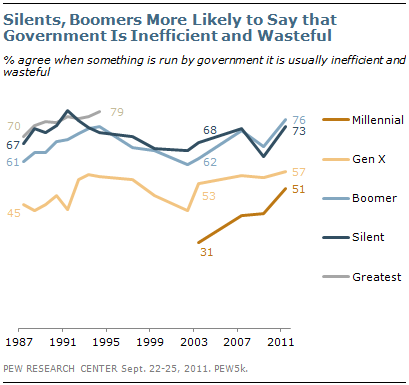 Over the past quarter century, Silents and Boomers have been particularly critical of government performance. Currently, about three-quarters in both groups say that when something is run by the government it is usually inefficient and wasteful. Gen Xers and Millennials have been less critical by comparison. Currently, 57% of Xers and 51% of Millennials say government is usually inefficient and wasteful.

While Millennials are currently among the most positive toward government, their criticism of government performance has risen substantially in recent years. In 2009, 42% described the government as usually inefficient and wasteful. That figure was 31% in 2003.

Concerns about government efficiency have also risen substantially among Boomers. In 2003, 62% described the government as wasteful; that has increased to 76% today. The share of Xers criticizing government performance rose from 43% in 2002 to 53% a year later but has since remained fairly stable.

The Silent generation has been critical of government performance throughout the past quarter century. Yet the percentage of Silents describing government as inefficient and wasteful has risen in the past two years (from 62% in 2009 to 73% currently).

Government for the People? 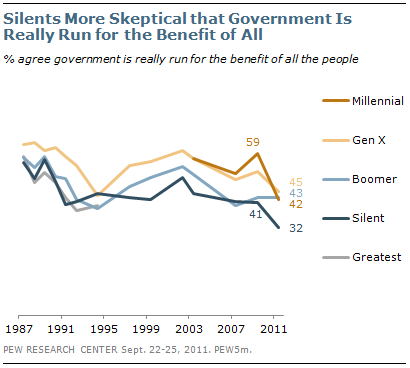 There also has been a decrease in the percentage of Gen Xers saying this, though the decline has been more gradual. In 2003, 57% said the government was run for all, 12 points higher than today.

Silents have consistently been more negative than Millennials and Xers in views of government fairness over the past decade. But in just the last two years, the percentage saying the government is run for all has slipped from 41% to 32%. As a result, Silents are n0w less likely than Boomers to say this. 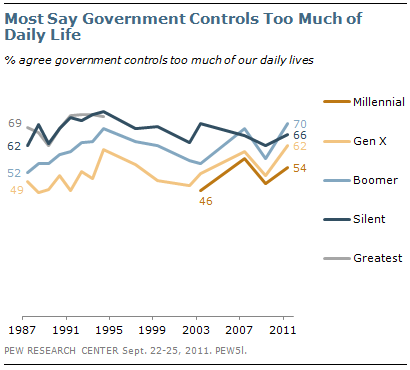 Over the course of the past quarter century, a majority has agreed that “the government controls too much of our daily lives.” Currently, 70% of Boomers say this, as do 66% of Silents and 62% of Xers.

Millennials are less likely than Silents or Boomers to express this view, though 54% agree that the government is too involved in people’s daily lives. 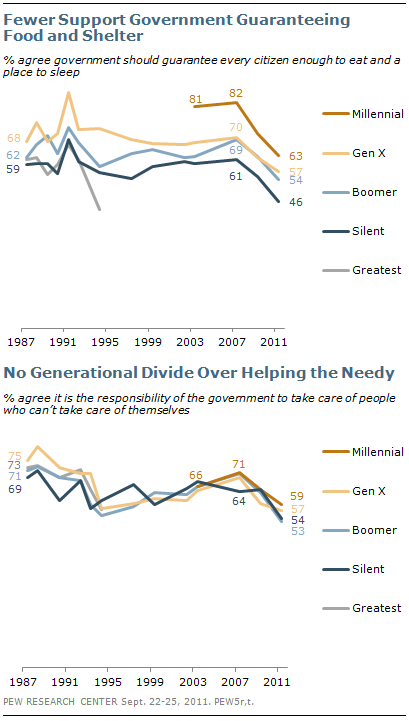 Generational differences also are evident in views of the government’s responsibilities toward the poor. Silents, in keeping with their preference for smaller government, have been among the least likely to say the government should guarantee every citizen enough to eat and a place to sleep.

Over the past four years, support for the government safety net has dropped. Currently, just 56% of Americans say the government should guarantee everyone food and shelter – the lowest since 1994. This trend has occurred across all generations, but the divide between Silents and Millennials has remained about as large as it was four years ago. 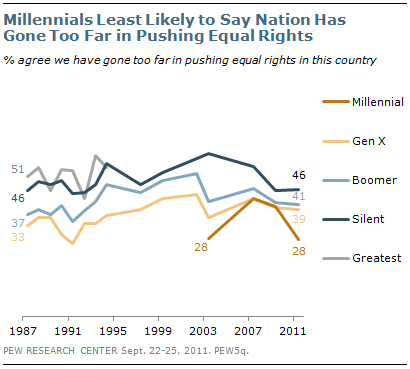 Roughly four-in-ten Americans (39%) say they agree that “we have gone too far in pushing equal rights in this country.” About six-in-ten (59%) disagree.

Since the question was first asked in 1987, there generally has been a generational divide in public attitudes, with older generations more likely to say the push for equal rights has gone too far. Currently, 46% of Silents say this, compared with 41% of Boomers, 39% of Gen Xers, and just 28% of Millennials.