Following Barack Obama’s June 22 speech about the Afghanistan war, there has been little change in public opinion about the president’s plans for drawing down the number of U.S. combat troops in that country.

As in early March, a plurality (44%) says they think Obama will remove troops at about the right pace. About three-in-ten (29%) think he will not withdraw them quickly enough, while 16% say troops will be removed too quickly, according to the latest survey by the Pew Research Center for the People & the Press and The Washington Post, conducted June 23-26 among 1,005 adults. 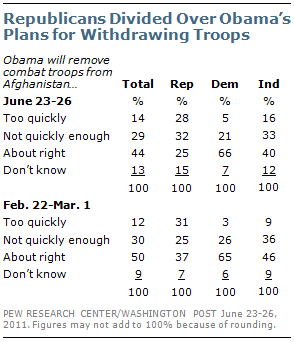 Fewer Republicans than in March say they think Obama will handle the withdrawal of U.S. forces about right (37% vs. 25%), but opinions are closely divided among the other options. About three-in-ten Republicans say Obama will not remove the troops quickly enough (32%), while about the same number (28%) says he will remove them too quickly. These numbers have shifted only slightly since March.

There has been little change in views of Democrats or independents. Most Democrats (66%) think that Obama will handle the withdrawal about right. Independents are more divided: 40% say they think Obama will handle the troop removal about right, while 33% say he will not remove them quickly enough. Another 16% say he will remove the troops too quickly.