More Americans believe Republicans in Congress, rather than the Obama administration, would be mainly responsible if the two sides cannot agree on a plan to increase the federal debt 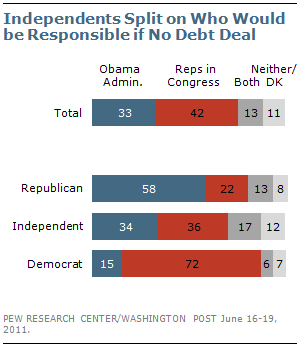 About four-in-ten (42%) say Republicans would bear the most responsibility if the debt limit is not raised and the government is unable to borrow more money to fund its operations. A third (33%) say the Obama administration would be mainly responsible, according to the latest survey by the Pew Research Center for the People & the Press and The Washington Post conducted June 16-19 among 1,003 adults.

But independents are divided: 36% say Republicans would be mainly responsible, while 34% say the Democratic administration would be. Another 17% say the two sides would share responsibility if the debt limit is not raised.