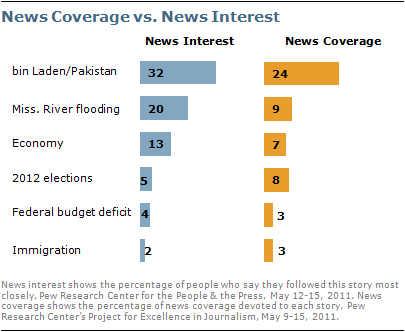 Public interest in the killing of Osama bin Laden has declined since the week U.S. forces raided his compound in Pakistan. But news coverage of bin Laden’s death has fallen more precipitously.

About a third of the public (32%) says they followed this news more closely than any other story last week, down from 42% one week earlier. The proportion saying they followed this story very closely also has fallen, from 50% to 37%.

Bin Laden continued to be the news media’s top story, but coverage of his death plummeted – from 69% of the newshole in the week immediately following the raid to 24% last week, according to a separate analysis by the Pew Research Center’s Project for Excellence in Journalism. The news media’s focus was less one-sided last week; 9% of the coverage was devoted to the flooding along the Mississippi River, 8% to possible 2012 presidential candidates, and 7% to the economy. 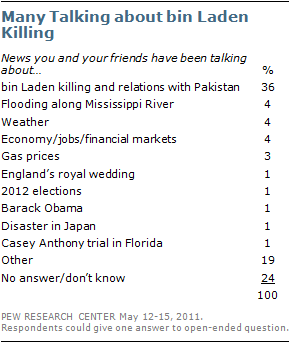 The latest weekly News Interest Survey, conducted May 12-15 among 1,006 adults, finds that more than a week after the dramatic U.S. military raid that killed bin Laden in Pakistan, the former al Qaeda leader is a leading topic of conversation.

When Americans are asked which news they have been talking about with friends, 36% say they have been talking about bin Laden’s killing and related stories. No other story comes close – just 4% each say their top subjects of conversation were flooding along the Mississippi, the weather, and the economy; 3% say gas prices was the subject they talked about most with their friends. 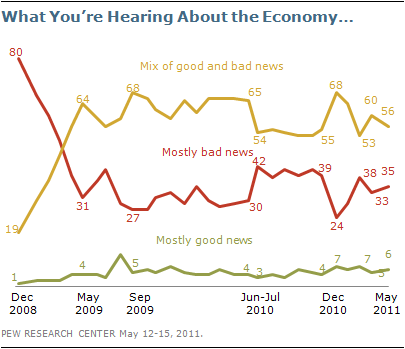 In January and February, fewer Americans saw the economic news as mostly bad (24% and 29% respectively), and more viewed news about the economy as mixed (68% and 64%, respectively).

ews about the economy. And about six-in-ten Democrats (62%) and independents (59%) say they are hearing a mix of good and bad news, compared with 48% of Republicans.

Looking at different sectors of the economy, majorities say they are hearing mostly bad news about prices for gas (84%) and food and consumer goods (58%). Those numbers are little changed from one month ago.

But more Americans than in early April say they are hearing mostly bad news about the job situation. Currently, 51% say this, up from 43% one month earlier, but about the same as in March (50%) and February (52%).

Trump, Gingrich Most Heard About in GOP Race 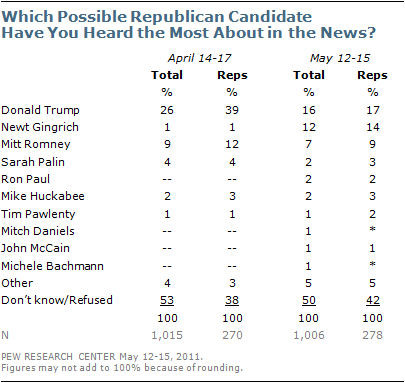 The survey, which was conducted just before Donald Trump announced he would not run for president next year, finds that Trump’s visibility has fallen over the past month, while Newt Gingrich’s has risen.

When asked which possible GOP candidate they have been hearing most about lately, 16% say Donald Trump, including 17% of Republicans. Last month, 26% of the public and 39% of Republicans said they were hearing the most about Trump.

At this point, the public continues to pay only modest attention to the slow starting 2012 campaign. Just 5% say this was the news they followed most closely. Using a separate measure, 15% say they followed campaign news very closely last week; about six-in-ten say they followed it either not too (26%) or not at all closely (35%). Still, election news accounted for 8% of coverage, matching its high for the year, according to PEJ.

While the killing of Osama bin Laden and its impact on U.S. relations with Pakistan topped both media coverage and news interest, the public and the media also closely tracked the flooding along the Mississippi River.

The bin Laden story was the most closely followed story for all partisan groups and for both men and women. Young people were more likely to list this as their top story than were older people. Four-in-ten (41%) of those younger than 30 say this was the story they followed most closely, compared with 19% of those 65 and older who say the same. Among the older age group, three stories were about equally likely to be cited as the top story: the Mississippi River flooding (21%), the bin Laden-Pakistan news (19%) and the U.S. economy (17%).

Southerners (25%) are more likely to cite the flooding as the story they followed most closely than are Westerners (17%) and Northeasterners (12%). About one-in-five (19%) Midwesterners said the flooding was their top story.

Just more than one-in-ten (13%) say news about the U.S. economy was their top story last week. About a third (32%) say they followed this news very closely, down eight points from one week earlier. News about the economy accounted for 7% of coverage, not including coverage focused specifically on the debate in Washington over the federal budget and the deficit.

About two-in-ten (21%) say they followed negotiations about the federal budget and the deficit very closely; 4% say this was their top story. This news accounted for 3% of coverage.

Nearly two-in-ten (18%) say they followed developments in the debate over U.S. immigration policy very closely; just 2% say this was their top story of the week. With Obama delivering a speech on the issue, news about immigration policy accounted for 3% of coverage.

These findings are based on the most recent installment of the weekly News Interest Index, an ongoing project of the Pew Research Center for the People & the Press. The index, building on the Center’s longstanding research into public attentiveness to major news stories, examines news interest as it relates to the news media’s coverage. The weekly survey is conducted in conjunction with The Project for Excellence in Journalism’s News Coverage Index, which monitors the news reported by major newspaper, television, radio and online news outlets on an ongoing basis. In the most recent week, data relating to news coverage were collected May 9-15, and survey data measuring public interest in the top news stories of the week were collected May 12-15, from a nationally representative sample of 1,006 adults.