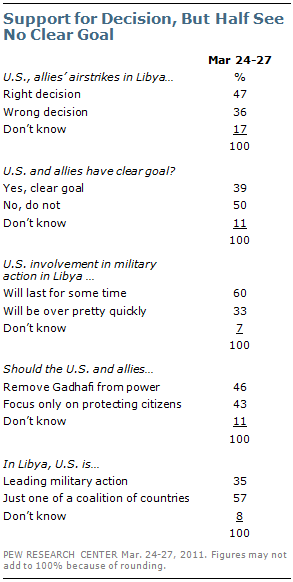 After several days of airstrikes on Libya by the United States and its allies, the public has mixed reactions to the military operation. Nearly half of Americans (47%) say the United States made the right decision in conducting air strikes in Libya while 36% say it was the wrong decision. Fully one-in-six (17%) express no opinion.

The latest national survey by the Pew Research Center for the People & the Press, conducted March 24-27 among 1,002 adults, finds modest public attentiveness to the events in Libya. Just 15% say they are following the airstrikes more closely than any other story of the week. Nearly four times as many people (57%) cite the aftermath of the Japanese earthquake and tsunami as their top story of the week, according to Pew Research’s weekly News Interest Index. (For more, see this week’s weekly News Interest Index, which will be released Tuesday, March 29.)

Most Americans see a fairly lengthy involvement for the United States in the Libyan operation. Six-in-ten (60%) think the U.S. involvement in military action in Libya will last for some time; just 33% expect that it will be over pretty quickly. 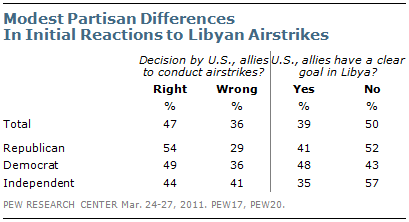 There is little indication that views of the Libyan military operation are breaking along political lines. About half of Republicans (54%) and Democrats (49%) say the decision by the U.S. and its allies to launch airstrikes was right. Among independents, 44% see the airstrikes as the right decision, while nearly as many (41%) say they are the wrong decision.

Other attitudes regarding the Libyan mission – including whether the ultimate aim should be Gadhafi’s removal – also show relatively little partisanship. Republicans, by 50% to 36%, say the goal of the airstrikes should include Gadhafi’s removal. About half of Democrats (49%) say Gadhafi’s removal should be a goal of military action while 43% say the mission should be focused only on protecting civilians. Independents are evenly divided (45% remove Gadhafi, 46% only protect civilians).