The public continues to take a dour view of the nation’s economy. Nearly nine-in-ten (89%) describe economic conditions in this country today as poor (45%) or only fair (44%). Just 9% say conditions are excellent (1%) or good (8%). The percentage saying the economy is excellent or good has remained virtually unchanged since Obama took office in early 2009.

While economic opinion is overwhelmingly negative on balance, the percentage calling the economy poor has declined nine points since October (from 54% to 45%), while the percentage saying conditions are only fair has risen six points (from 38% to 44%). As a result, about as many call conditions only fair (44%) as poor (45%); for much of the previous two years, more called the economy poor than only fair. 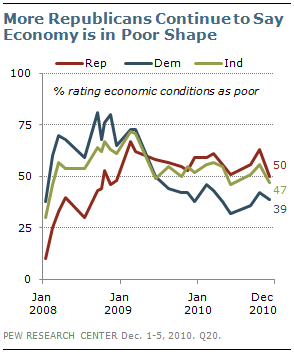 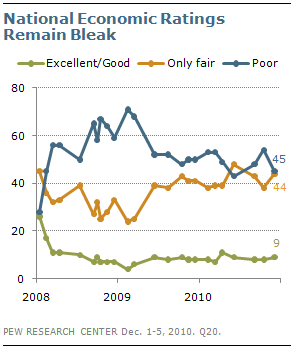 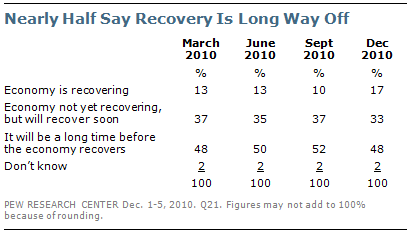 Nearly half of the public (48%) says that it will be a long time before the economy recovers. About as many (50%) say either that the economy is recovering (17%) or will recover soon (33%).

These evaluations are largely unchanged from earlier this year, although more say the economy is recovering than did so in September (17% now, 10% then).

There are indications of increased optimism 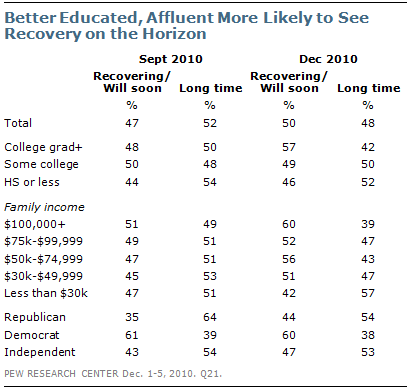 about the economy, particularly among people with more education and higher incomes. In the current survey, 57% of college graduates say the economy is either recovering (21%) or will recover soon (35%). That compares with 42% who say it will take a long time for the economy to recover.

In September, college graduates were evenly divided over the prospects for a quick recovery (48% recovering/will recover vs. 50% long time). Opinions among those with less education have shown almost no change.

While opinions about prospects for an economic recovery remain divided along partisan lines, more Republicans (44%) say the economy is recovering now (11%) or will soon (33%) than did so in September, when 35% said that the economy was recovering (6%) or would recover soon (29%). 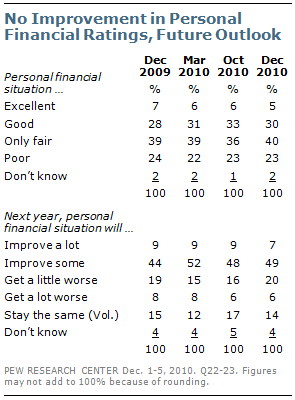 Despite modest personal economic ratings, most expect at least some improvement in the coming year: 56% say they think their own economic situation will improve a lot (7%) or some (49%) over the next year. One-in-five (20%) expect their situation to get a little worse, 6% think it will become a lot worse, and 14% volunteer that they expect it to stay the same. While optimistic on balance, personal financial expectations have shown no improvement over the course of 2010. 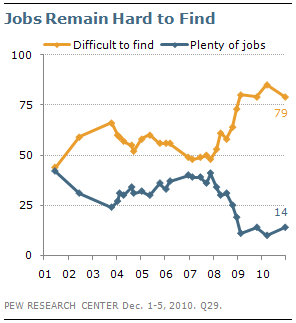 With unemployment hovering close to 10%, the public takes an overwhelmingly negative view of the job market. Nearly eight-in-ten (79%) say job opportunities in their area are difficult to find, compared with just 14% who say there are plenty of jobs available in their community.

While down six points from March, the percentage saying that jobs are difficult to find remains among the highest numbers recorded by Pew Research surveys since the question was first asked in June 2001.

Large majorities of all demographic groups evaluate the job situation as difficult, but there are significant differences 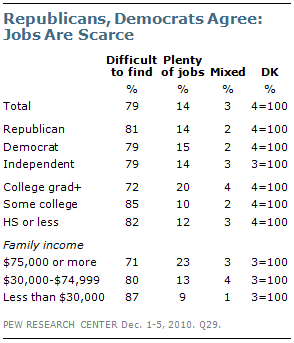 A similar pattern can be seen across income groups with those at the top of the scale describing jobs as difficult to find, but by a less overwhelming margin than those at lower income levels. 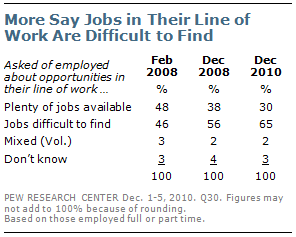 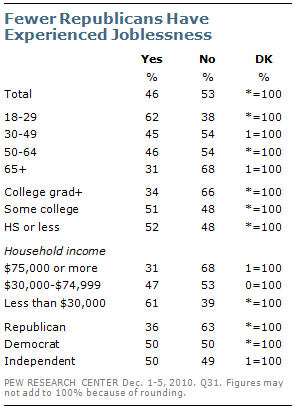 Almost half (46%) of Americans say that someone in their household has been without a job and looking for work over the last year. This number has fluctuated in recent months, but is up from just 28% in February of 2008, when the national unemployment rate was closer to 5%.

Young people continue to be among the most likely to experience unemployment first-hand: 62% say that they or someone in their household have been unemployed and looking for work over the past 12 months.

Socio-economic differences persist as well, with half or more of those without a college degree and those in households earning less than $30,000 annually reporting household unemployment within the last year.

Democrats and independents (50% each) are more likely than Republicans (36%) to say that someone in their household has been unemployed over the past 12 months. 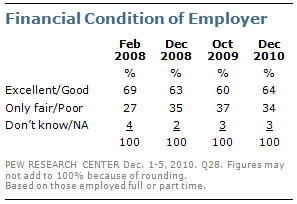 Despite a bleak view of the job market and widespread household unemployment, most working people deem their employer to be financially healthy. Roughly two-thirds of workers (64%) say the company that employs them is in either excellent (23%) or good (41%) shape. About a third (34%) say their employer is in only fair (27%) or poor (7%) financial shape. These numbers have changed little over the past two years.

Views of the Real Estate Market 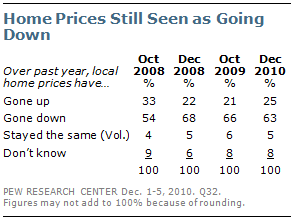 About six-in-ten (63%) say that home prices in their local area have decreased over the past year. Nearly three-in-ten (29%) say home prices have gone down a lot, while about as many (34%) say they have gone down a little. Just a quarter (25%) say home prices have increased in their area over the last year. Current ratings of their local real estate market performance are similar to those in October of last year and December 2008. 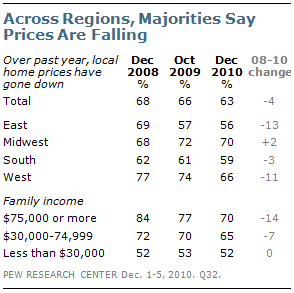 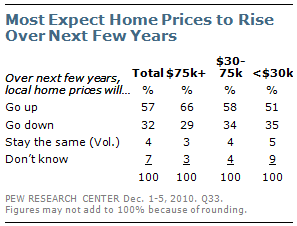 period. These expectations are about the same as they were in July 2008.

There are few demographic differences in expectations about the real estate market. Those with family incomes of $75,000 or more are more likely than others to say the
prices will rise over the next few years (66%, compared with 58% of those with incomes between $30,000 and $74,999 and 51% of those with lower incomes).