Results for this survey are based on telephone interviews conducted August 25-September 6, 2010 among a national sample of 3,509 adults 18 years of age or older living in the continental United States (2,351 respondents were interviewed on a landline telephone, and 1,158 were interviewed on a cell phone, including 508 who had no landline telephone). Interviewing was conducted under the direction of Princeton Survey Research Associates International. Both the landline and cell phone samples were provided by Survey Sampling International. Interviews were conducted in English and Spanish. For detailed information about our survey methodology, see https://www.pewresearch.org/politics/methodology/.

The combined landline and cell phone sample are weighted using an iterative technique that matches gender, age, education, race/ethnicity, region, and population density to parameters from the March 2009 Census Bureau’s Current Population Survey. The sample also is weighted to match current patterns of telephone status and relative usage of landline and cell phones (for those with both), based on extrapolations from the 2009 National Health Interview Survey. The weighting procedure also accounts for the fact that respondents with both landline and cell phones have a greater probability of being included in the combined sample and adjusts for household size within the landline sample. Sampling errors and statistical tests of significance take into account the effect of weighting. 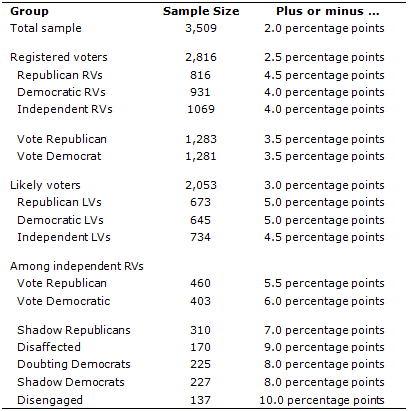 Likely voter estimates are based on a 7-item turnout scale that includes the following questions: thought, precinct, q6f1/q7f2, oftvote, planto1, scale10 and pvote08a. More details about the Pew Research Center’s methodology for estimating likelihood to vote are available at
https://www.pewresearch.org/politics/methodology/files/UnderstandingLikelyVoters.pdf

Methodology for Creating the Typology of Independent Voters

To create the typology of independent voters, respondents were sorted into relatively homogeneous groups using a statistical procedure called “cluster analysis.” The cluster analysis utilized responses to several attitudinal and behavioral questions, including views about government, attitudes about elected officials and the political parties, measures of optimism and outlook, opinion about business and immigrants, interest in politics and past voting behavior. Measures of each of these dimensions were based on one or more questions from the survey.

Cluster analysis is not a precise or exact process because many different cluster solutions are possible using the same data. Several different cluster solutions were evaluated for their effectiveness in producing cohesive groups that were sufficiently distinct from one another, large enough in size to be analytically practical, and substantively meaningful. While each solution differed somewhat from the others, all of them shared certain key features. The solution chosen for this report was representative of the general patterns seen across the various cluster solutions.

Independents Oppose Party in Power...Again Section 1: The Midterm Vote Section 2: Independents in the 2010 Midterm Section 3: Trends in Party Affiliation Section 4: Independents Under the Microscope
About the Survey
Likely Voter and Engagement MeasuresMethodology for Creating the Typology of Independent Voters