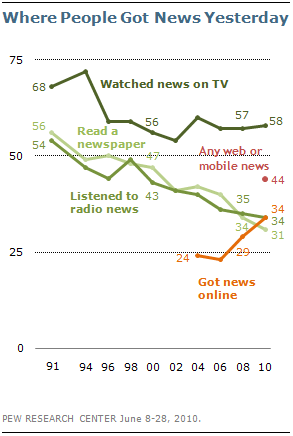 There are many more ways to get the news these days, and as a consequence Americans are spending more time with the news than over much of the past decade. Digital platforms are playing a larger role in news consumption, and they seem to be more than making up for modest declines in the audience for traditional platforms. As a result, the average time Americans spend with the news on a given day is as high as it was in the mid-1990s, when audiences for traditional news sources were much larger.

Roughly a third (34%) of the public say they went online for news yesterday – on par with radio, and slightly higher than daily newspapers. And when cell phones, email, social networks and podcasts are added in, 44% of Americans say they got news through one or more internet or mobile digital source yesterday.

At the same time, the proportion of Americans who get news from traditional media platforms – television, radio and print – has been stable or edging downward in the last few years. There has been no overall decline in the percentage saying they watched news on television, and even with the continued erosion of print newspaper and radio audiences, three-quarters of Americans got news yesterday from one or more of these three traditional platforms.

In short, instead of replacing traditional news platforms, Americans are increasingly integrating new technologies into their news consumption habits. More than a third (36%) of Americans say they got news from both digital and traditional sources yesterday, just shy of the number who relied solely on traditional 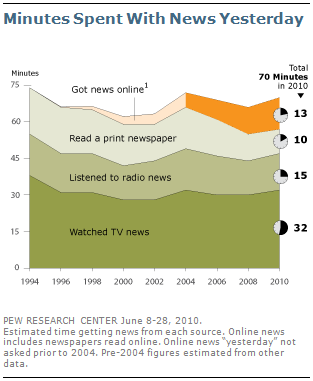 sources (39%). Only 9% of Americans got news through the internet and mobile technology without also using traditional sources.

The net impact of digital platforms supplementing traditional sources is that Americans are spending more time with the news than was the case a decade ago. As was the case in 2000, people now say they spend 57 minutes on average getting the news from TV, radio or newspapers on a given day. But today, they also spend an additional 13 minutes getting news online, increasing the total time spent with the news to 70 minutes. This is one of the highest totals on this measure since the mid-1990s and it does not take into account time spent getting news on cell phones or other digital devices .

The biennial news consumption survey by the Pew Research Center for the People & the Press, conducted June 8-28 on cell phones and landlines among 3,006 adults, finds further evidence that the combination of digital and traditional platforms is leading to increased news consumption. 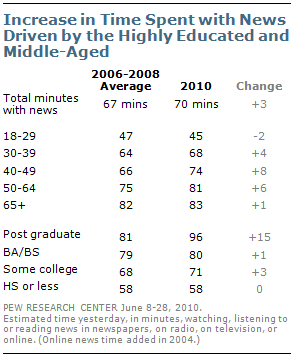 Digital platforms are supplementing the news diets of news consumers, but there is little indication they are expanding the proportion of Americans who get news on a given day. The vast majority of Americans (83%) get news in one form or another as part of their daily life. But even when cell phones, podcasts, social networks, email, Twitter and RSS feeds are accounted for, 17% of Americans say they got no news yesterday, little changed from previous years.

Moreover, while young people are most likely to integrate new technologies into their daily lives, they are not using these sources to get news at higher rates than do older Americans. Rather, those in their 30s are the only age group in which a majority (57%) reports getting news on one or more digital platforms yesterday.

The integration of traditional and digital technology is common among those in older age groups as well. Nearly half (49%) of people in their 40s, and 44% of those between 50 and 64, got news through one or more digital modes yesterday – rates that are comparable to those 18 to 29 (48%). Digital news consumption is low only among those ages 65 and older, just 23% of whom used one or more digital modes for news yesterday.

Only about one-in-four (26%) Americans say they read a newspaper in print yesterday, down from 30% two years ago and 38% in 2006. Meanwhile, online newspaper readership continues to grow and is offsetting 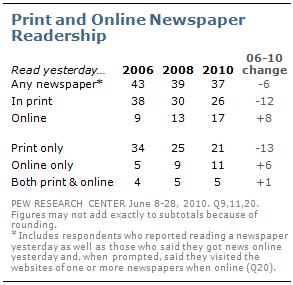 But the online audience is only partially stemming the decline in the share of Americans who turn to newspapers; even when all online newspaper readership is included, 37% of Americans report getting news from newspapers yesterday, virtually unchanged from 39% two years ago, but down from 43% in 2006. (These percentages still may miss some people who access newspaper content indirectly through secondary online sources such as news aggregators or search engines.)

The young profile of the regular New York Times readership is undoubtedly linked to the paper’s success online. Nearly one-in-ten of internet users younger than 30 (8%) – and 6% of all internet users – volunteer the New York Times when asked to name a few of the websites they use most often to get news and information. 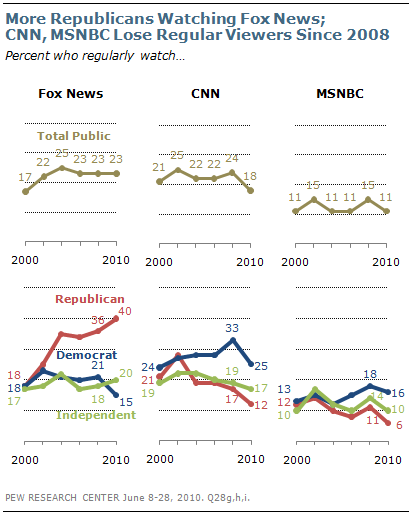 Overall, cable news continues to play a significant role in peoples’ news habits – 39% say they regularly get news from a cable channel. But the proportions saying they regularly watch CNN, MSNBC and CNBC have slipped substantially from two years ago, during the presidential election. 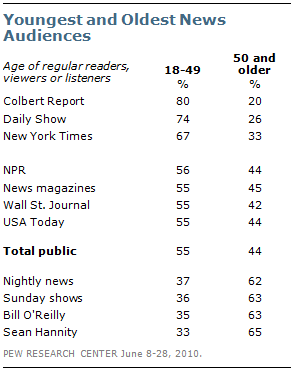 hosts Sean Hannity, Glenn Beck and Bill O’Reilly have succeeded in attracting conservative and attentive audiences. This is also the case for radio host Rush Limbaugh.

Most of those who regularly watch O’Reilly (63%) and Hannity (65%) are 50 or older; 44% of the public is 50 or older. By contrast, the Daily Show and Colbert Report have the youngest audiences of any outlet included in the survey. Large majorities of those who say they regularly watch the Colbert Report (80%) and the Daily Show (74%) are younger than 50; 55% of public is 18 to 49.

Ideology continues to be closely associated with people’s choice of certain news sources. Eight-in-ten Americans (80%) who regularly listen to Rush Limbaugh or watch Sean Hannity are conservative – roughly twice the national average of 36%. And at the other end of the spectrum, the New York Times, Keith Olbermann, the Daily Show, the Colbert Report and Rachel Maddow have regular audiences that include nearly twice the proportion of liberals than in the public.

News audiences also vary widely when it comes to opinions about current issues and topics. For instance, those who describe themselves as supporters of the Tea Party movement make up disproportionately large proportions of the audiences for Limbaugh’s radio show and Fox News opinion programs. This also is the case for supporters of the NRA (National Rifle Association). 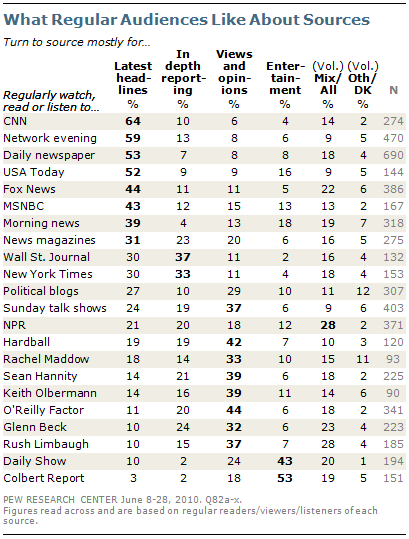 for in-depth reporting (10%), interesting views and opinions (6%) or entertainment (4%). Similarly, the main appeal of network evening news, USA Today and daily newspapers is the latest news and headlines.

Regular Fox News viewers offer somewhat different reasons for tuning into that network: 44% say they go to Fox for the latest news, but a sizable minority (22%) volunteers several reasons or say that all apply.

Regular readers of the Wall Street Journal and New York Times are drawn particularly by in-depth reporting; 37% and 33%, respectively, say they mostly read those papers for in-depth reporting, the highest percentages for any new outlet.

For the audiences of evening cable programs – whether liberal or conservative – interesting views and opinions are the primary appeal. That is the case for regular listeners of Rush Limbaugh as well, although many Limbaugh listeners cite multiple reasons or say that all apply.

For some news audiences, such as regular NPR listeners, no single reason stands out as to why people watch, read or listen: 28% of regular NPR listeners cite several, or all, of the reasons listed, while nearly as many say they listen for the latest news (21%) or for in-depth reporting (20%). 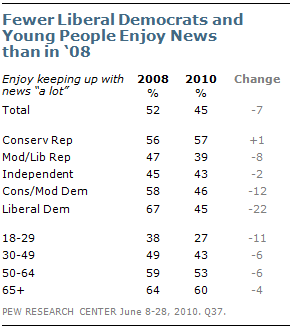 Overall, the share of Americans who say keeping up with the news is something they enjoy a lot has dipped, from a consistent 52% in recent biennial news consumption surveys, including 2008, to 45% in 2010.

The decline is linked to partisanship and ideology: in 2008 67% of liberal Democrats said they enjoyed the news a lot, compared with just 45% today. By contrast, about as many conservative Republicans say they enjoy keeping up with the news today as did so two years ago (57% now, 56% then). This has resulted in a switch in news enjoyment. Today, conservative Republicans enjoy keeping up with the news more than any other ideological and partisan group; just two years ago it was the liberal Democrats who held that distinction.

•While 26% of all Americans say they read a print newspaper yesterday, that figure falls to just 8% among adults younger than 30.

•Far more men (50%) than women (39%) get news on digital platforms, such as the internet and mobile technology, on any given day. Men are more likely to get news by cell phone, email, RSS feeds or podcasts than are women. But men and women are equally likely to get news through Twitter or social networking sites. 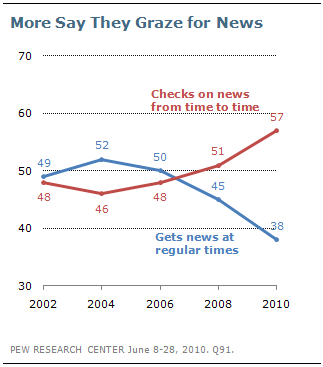 •More people say they mostly get news “from time to time” rather than at “regular times.” The percentage of so-called news grazers has increased nine points (from 48% to 57%) since 2006.

•Search engines are playing a substantially larger role in people’s news gathering habits – 33% regularly use search engines to get news on topics of interest, up from 19% in 2008.

•About three-in-ten adults (31%) access the internet over their cell phone, but just 8% get news there regularly.

•Most Facebook and Twitter users say they hardly ever or never get news there.
•One-in-four adults (25%) who have Tivos or DVRs say they program them to record news programs.

•About eight-in-ten (82%) say they see at least some bias in news coverage; by a 43% to 23% margin, more say it is a liberal than a conservative bias.

•Roughly a third (35%) read a book yesterday, which is largely unchanged over the past decade. Of those, 4% read an electronic or digital book.

•The public struggled with a four-question current events quiz – just 14% answered all four correctly. But about half (51%) of regular Wall Street Journal readers aced the quiz, as did 42% of regular New York Times readers.

•Partisan gaps in media credibility continue to grow, with Republicans far more skeptical of most major news sources than Democrats. The one exception is Fox News, which twice as many Republicans believe all or most of (41%) than Democrats (21%).

Next: Section 1: Watching, Reading and Listening to the News
← Prev Page
You are reading page1Page2Page3Page4Page5Page6Page7Page8
Next Page →