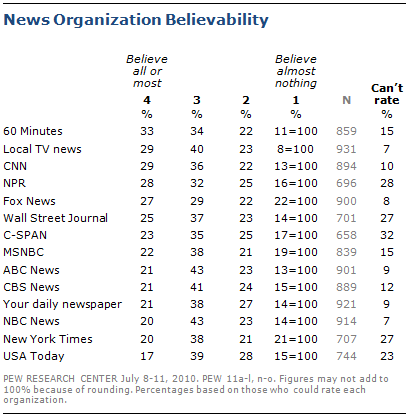 The public continues to take a skeptical view of reporting from the major news outlets. No more than a third says they can believe all or most of the reporting by 14 major news organizations.

There has been little change in public views of media credibility since 2008. Since the late 1990’s, however, there has been significant erosion in the believability ratings of several news organizations.

The longer-term declines can be seen across different media groups as well. Since 1998, CNN and the Wall Street Journal, for example, have experienced double-digit declines in the percentages saying they can believe all or most of their reporting (a rating of four on a scale of one to four). Currently, 29% say they can believe all or most of the reporting of CNN and 25% say the same about the Wall Street Journal.

The credibility ratings for Fox News (27% today) and 60 Minutes (33%) have shown less change over the past decade. And NPR is the only news organization whose credibility rating has improved since 1998 – 28% now give it the top rating compared with 19% a dozen years ago.

National newspapers fare relatively poorly when it comes to public perceptions of media credibility. Just two-in-ten (20%) of those who offer a rating for the New York Times say they can believe all or most of what it says and just 17% say the same about USA Today. Those numbers have fluctuated only slightly since 2004. Local daily news newspapers are seen in largely the same way (21% get the highest credibility rating). 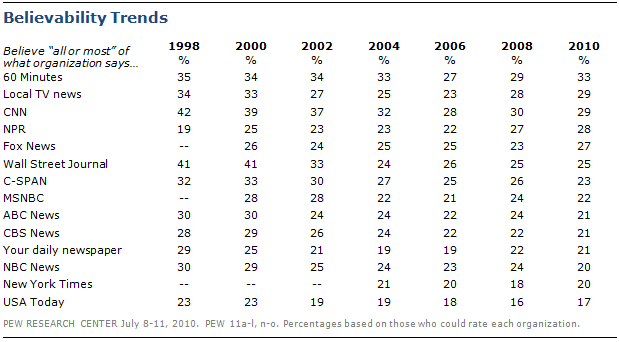 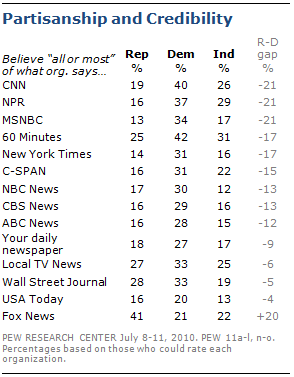 Republicans have long viewed the overall media more skeptically than Democrats and this continues to be reflected in credibility ratings for individual news outlets. Republicans express far less confidence than Democrats in most major outlets. The Fox News Channel stands out as the only news organization that more Republicans than Democrats view as highly credible.

Democrats are at least twice as likely as Republicans to give the highest believability ratings to CNN, NPR, MSNBC and the New York Times. 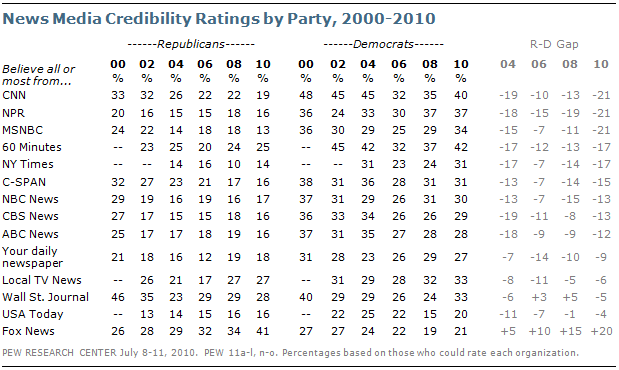 Republican credibility ratings for MSNBC have fallen over the past decade, from 24% in 2000 to 13% today. Democrats’ ratings have changed little over this period (now 34%). As a result, partisan differences over MSNBC’s credibility (21 points) are as large as those over Fox News.

Similarly, there is sizable partisan divide in perceptions of CNN’s credibility; 19% of Republicans say they believe all or most of what they see or hear on CNN, compared with 40% of Democrats.

Next: Commentary
← Prev Page
Page1Page2Page3Page4Page5You are reading page6Page7Page8
Next Page →