A growing share of polling is conducted with online opt-in samples.1 This trend has raised some concern within the industry because, while low participation rates pose a challenge for all surveys, the online opt-in variety face additional hurdles. By definition they do not cover the more than 10% of Americans who don’t use the internet. The fact that potential respondents are self-selected means that there is still substantial risk that these samples will not resemble the larger population. To compensate for these challenges, researchers have employed a variety of statistical techniques, such as raking, propensity weighting and matching, to adjust samples so that they more closely match the population on a chosen set of dimensions. Researchers working with online opt-in samples must make a great many decisions when it comes to weighting. What factors should guide these decisions, and which ones are most consequential for data quality?

A new Pew Research Center study adds to the survey field’s broader efforts to shed light on these questions. The study was based on over 30,000 online opt-in panel interviews conducted in June and July of 2016, with three vendors, and focuses on national (as opposed to state or local level) estimates. We evaluated three different weighting techniques, raking, propensity weighting and matching, both on their own and in combination. Every method was applied using two sets of adjustment variables: basic demographics (age, sex, race and ethnicity, education, and geographic region), and a more extensive set that included both demographics and a set of variables associated with political attitudes and engagement (voter registration, political party affiliation, ideology and identification as an evangelical Christian). Each procedure was performed on simulated samples ranging in size from n=2,000 to n=8,000.

The procedures were primarily appraised according to how well they reduced bias on estimates from 24 benchmark questions drawn from high-quality federal surveys.2 They were also compared in terms of the variability of weighted estimates, accuracy among demographic subgroups, and their effect on a number of attitudinal measures of public opinion. 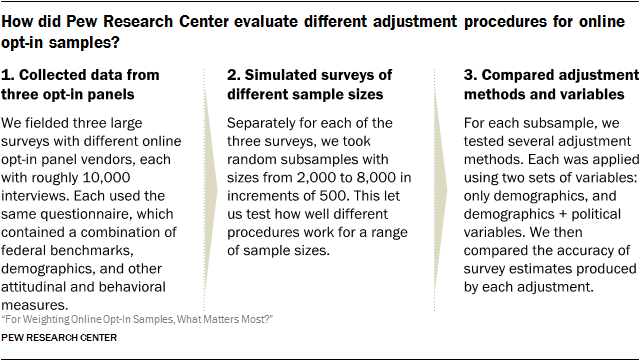 The weighting procedures tested in this report represent only a small fraction of the many possible approaches to weighting opt-in survey data. There are a host of different ways to implement matching and propensity weighting, as well as a variety of similar alternatives to raking (collectively known as calibration methods). We also did not evaluate methods such as multilevel regression and poststratification, which require a separate statistical model for every outcome variable. Add to this the innumerable combinations of variables that could be used in place of those examined here, and it is clear that there is no shortage of alternative protocols that might have produced different results.

But whatever method one might use, successfully correcting bias in opt-in samples requires having the right adjustment variables. What’s more, for at least many of the topics examined here, the “right” adjustment variables include more than the standard set of core demographics. While there can be real, if incremental, benefits from using more sophisticated methods in producing survey estimates, the fact that there was virtually no differentiation between the methods when only demographics were used implies that the use of such methods should not be taken as an indicator of survey accuracy in and of itself. A careful consideration of the factors that differentiate the sample from the population and their association with the survey topic is far more important.

Next: 1. How different weighting methods work
← Prev Page
You are reading page1Page2Page3Page4Page5Page6Page7Page8
Next Page →