Overall, Americans give positive marks to the news sources they turned to most often for their coverage of Election Day and its aftermath – including four days of uncertainty before major media outlets declared Biden the winner amid Trump’s claims that the results were illegitimate in key battleground states. But within that positive assessment, Democrats and independents who lean Democratic are notably more likely than Republicans and independents who lean Republican to say that the news sources they used most performed well. Some of that may reflect that Democrats are more satisfied than Republicans with the result of the election, as well as Democrats’ consistently more favorable views of the news media.

The survey asked how well people felt the sources they turn to most did in four different areas of post-election coverage: Trump’s reaction to the results, Biden’s reaction, the process of counting votes and the different ways people could have voted. In each of these four evaluations of media performance, Democrats are at least twice as likely as Republicans to say their news sources covered the subject very well.

Overall, about three-quarters of Americans say the sources they turn to most did “very” (34%) or “somewhat” well (42%) in their coverage of Trump’s reaction to the election results. While nearly half of Democrats say their sources performed very well (47%) in this area, 19% of Republicans say the same.

Beyond coverage of the candidates, a large majority of all Americans (78%) say their most turned to sources did very well (37%) or somewhat well (41%) covering the different ways people could vote during the election, which was held in the midst of a pandemic. Again, Democrats express higher levels of approval – 53% said their sources did “very well” on this, vs. 21% of Republicans.

There is also a large partisan difference in how the most-used sources did in explaining the process of counting votes. That job was complicated by the fact that Trump’s early leads among in-person Election Day voters in some states were eroded by mail-in ballots counted later, and by the decision of Fox News and the Associated Press to call the state of Arizona for Biden on Nov. 3 and 4 even as other news outlets withheld their call.

One media-related narrative to emerge in the late stages of the campaign was about possible Republican and conservative disenchantment with the Fox News cable channel, given Trump’s increasing criticisms of the outlet and his widely reported anger when Fox News called Arizona for Biden well before a number of other outlets. 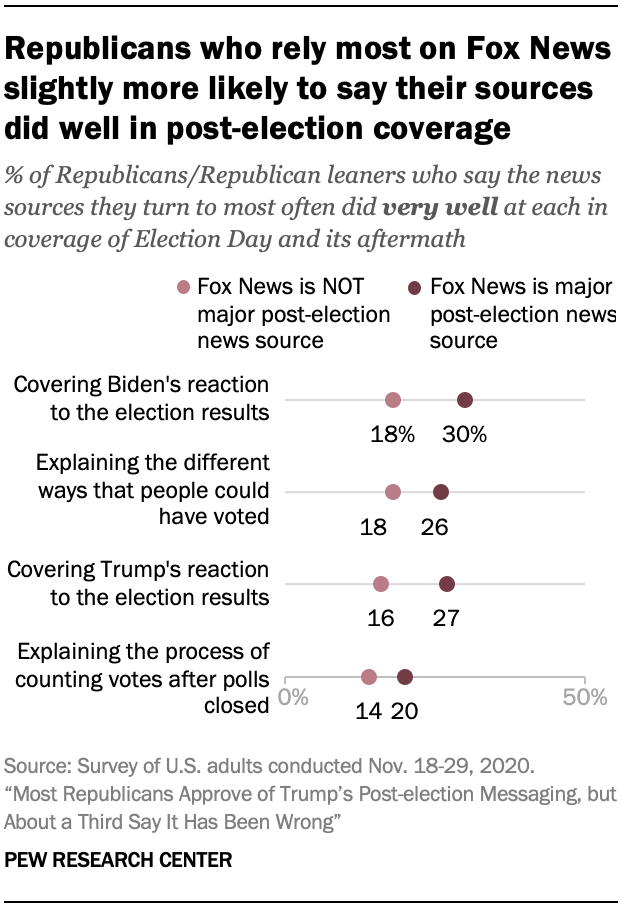 Perhaps not coincidentally, there has been considerable coverage of whether two of Fox’s much smaller competitors for conservative viewers – the One America News Network (OANN) and Newsmax TV – could loosen Fox’s strong grip on some of those viewers. (In a November 2019 survey, 65% of Republicans said they trusted Fox News as a news source, about twice as many as for any other source.)

In examining assessments of election coverage of Nov. 3 and its aftermath, this analysis compared Republicans who identified Fox News as a major source for that coverage with those who did not. What emerged – by modest but consistent margins – is that Republicans who used Fox as a major source for coverage consistently say their chosen sources did a better job of covering the events surrounding the election. In at least this data, then, there is no evidence of particular dissatisfaction among Republicans who turned mainly to Fox News for election coverage after polls closed.

The same dynamic holds for coverage of Biden’s reaction to the election results, with 30% of Republicans who relied on Fox saying their most-used sources did very well compared with 18% in the non-Fox group.

Republicans give a generally positive assessment of how their most relied on sources covered the ways people could cast ballots in 2020. But again, those in the Fox News group were slightly more pleased with the performance of its most-used sources (26% very well) than the group that did not use Fox as a major source (18% very well). 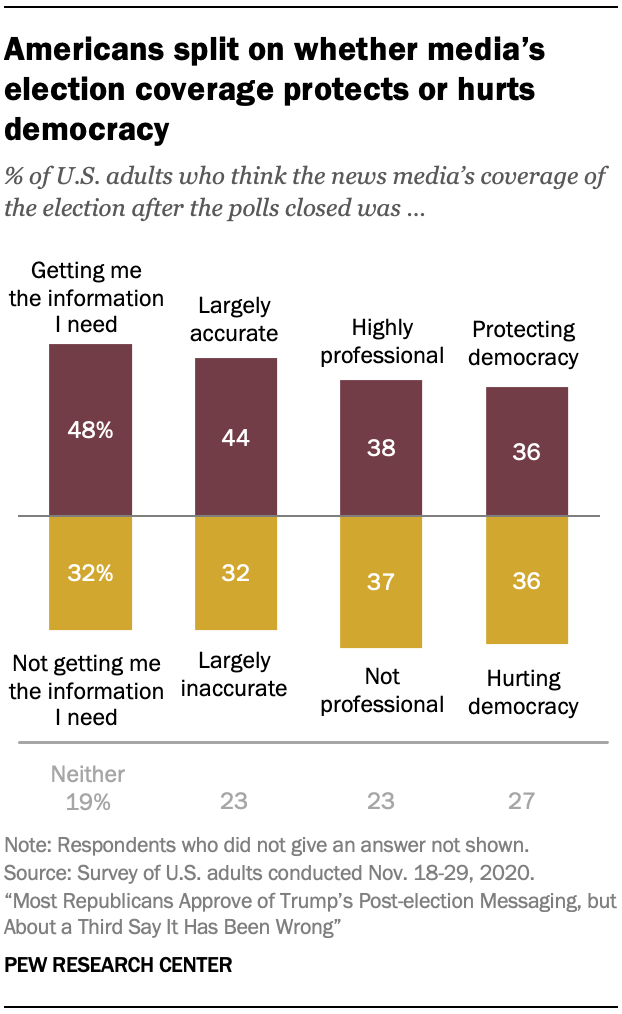 Partisan differences over how news sources covered the events after the polls closed widen further when respondents are asked to evaluate the performance of the news media in general rather than their own most-used sources.

A plurality (44%) of all Americans say that general media coverage of the election since the polls closed was largely accurate, while 32% say it was largely inaccurate and 23% say it was neither. And about half of all U.S. adults (48%) say the media got them the information they needed after the polls closed, compared with 32% who say they did not get the information they needed and 19% who say neither description applies.

On all of these measures, there are dramatic partisan differences, with Democrats being far more likely to rate the media positively. Democrats are almost four times as likely as Republicans to say that media coverage was largely accurate (69% vs. 18%). A majority of Republicans (58%) say it was largely inaccurate, compared with a small fraction (10%) of Democrats. And nearly three-quarters (72%) of Democrats say the news media delivered the information they needed, compared with only 22% of Republicans. Instead, a majority of Republicans (57%) say they did not get the information they were looking for. 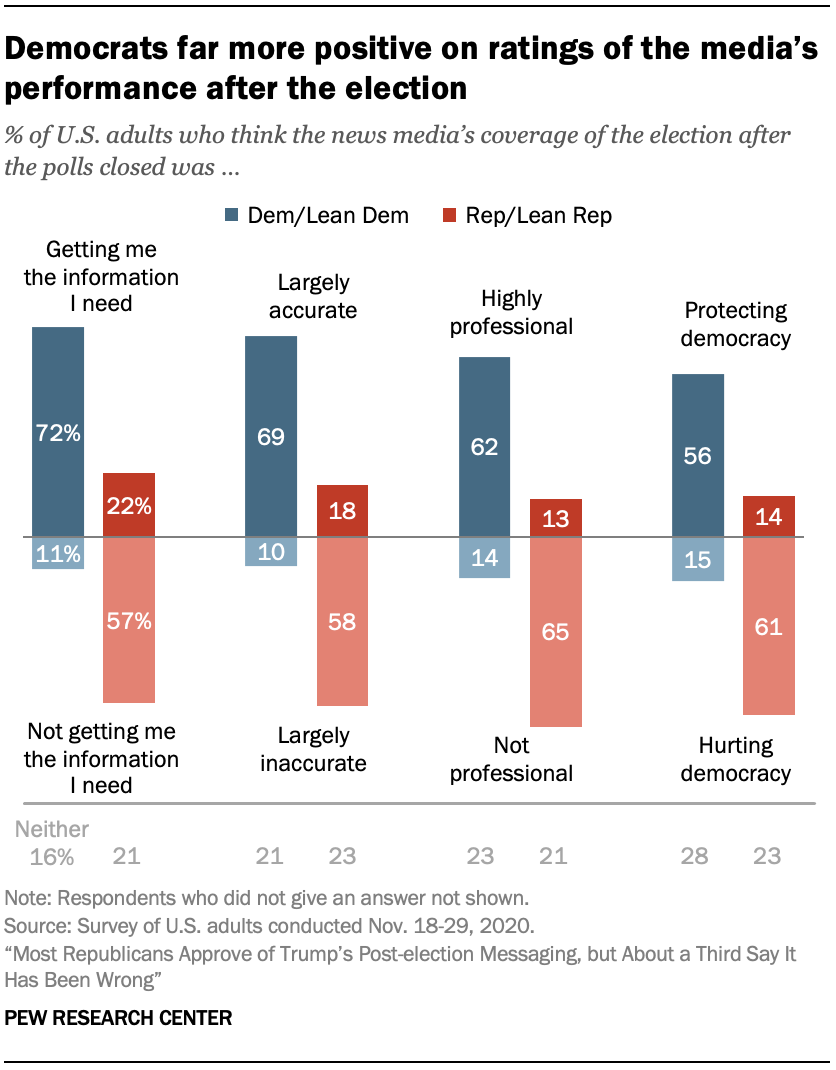 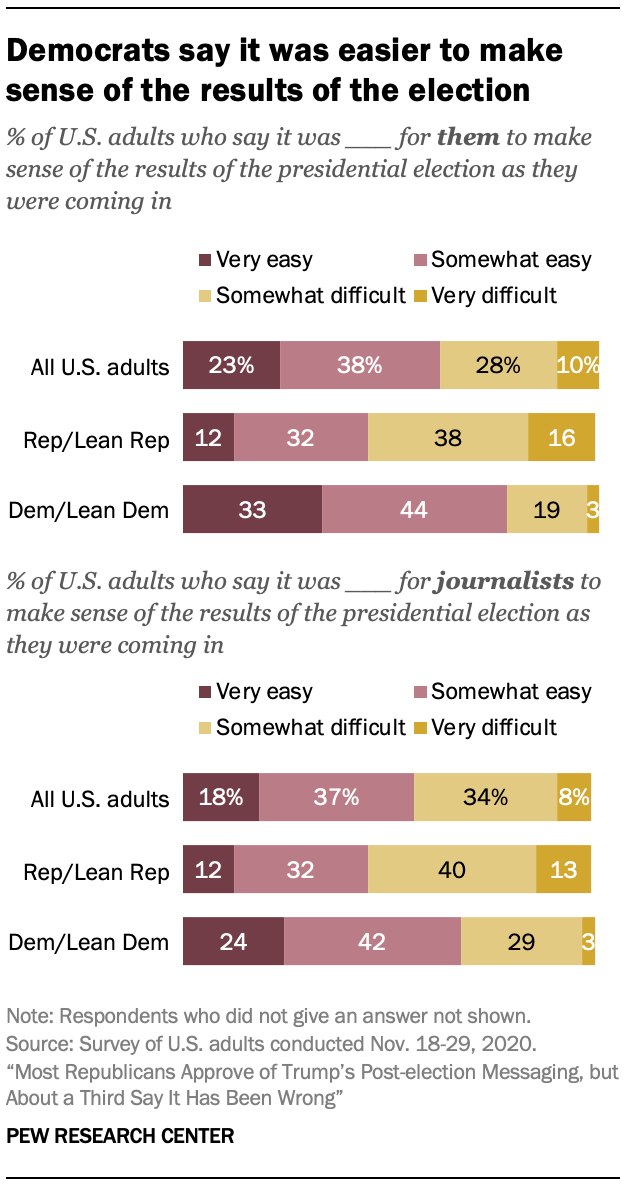 Next: 3. Concerns about made-up election news are high, and both parties think it is mostly intended to hurt their side
← Prev Page
Page1Page2You are reading page3Page4Page5Page6Page7
Next Page →

Most Republicans Approve of Trump’s Post-election Messaging, but About a Third Say It Has Been Wrong 1. Partisans disagree on post-election messages from Biden and Trump, attention to voter fraud charges
2. Americans generally approve of their news sources’ election coverage, but Republicans less so than Democrats
Republicans who use Fox News as a major source give coverage modestly better grades than those Republicans who don’tPartisan gaps widen further on the election performance of the media in general
3. Concerns about made-up election news are high, and both parties think it is mostly intended to hurt their side 4. Americans’ attention to news about the coronavirus pandemic remains steady in November as cases surge Appendix: Grouping respondents by major news sources Methodology