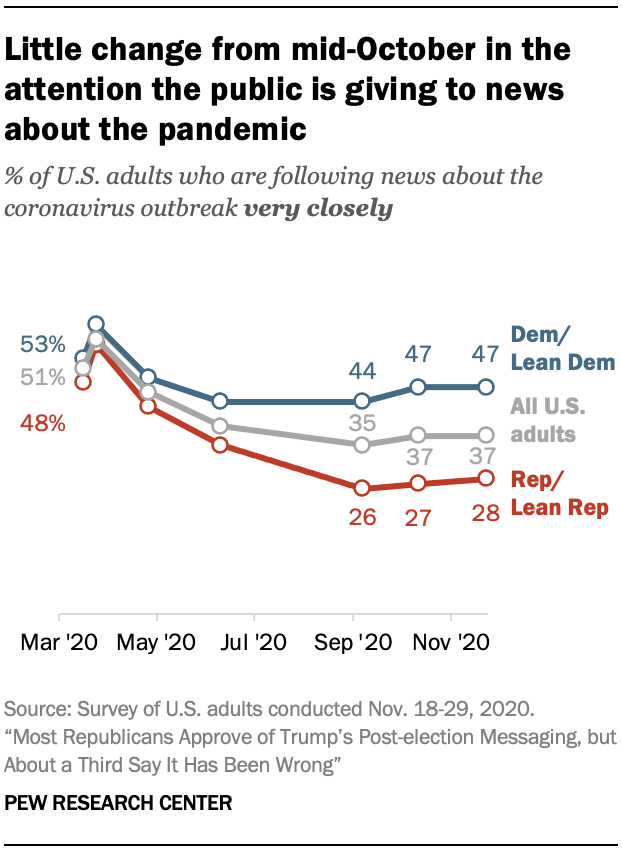 Democrats and independents who lean toward the Democratic Party remain more engaged with coronavirus news than Republicans and Republican-leaning independents. Nearly half of Democrats (47%) are following COVID-19 news very closely, compared with about three-in-ten Republicans (28%). This gap in attention across the partisan divide has been consistent throughout surveys conducted in the late summer and fall.

Republicans and Democrats remain deeply divided over whether the coronavirus outbreak has been exaggerated or not, though compared with before the election, slightly fewer Republicans now say the virus has been made a bigger deal than it really is.

About a third of Americans (34%) say the outbreak has been exaggerated, while three-in-ten (30%) say it has been made a smaller deal than it really is and 36% say it has been approached about right. 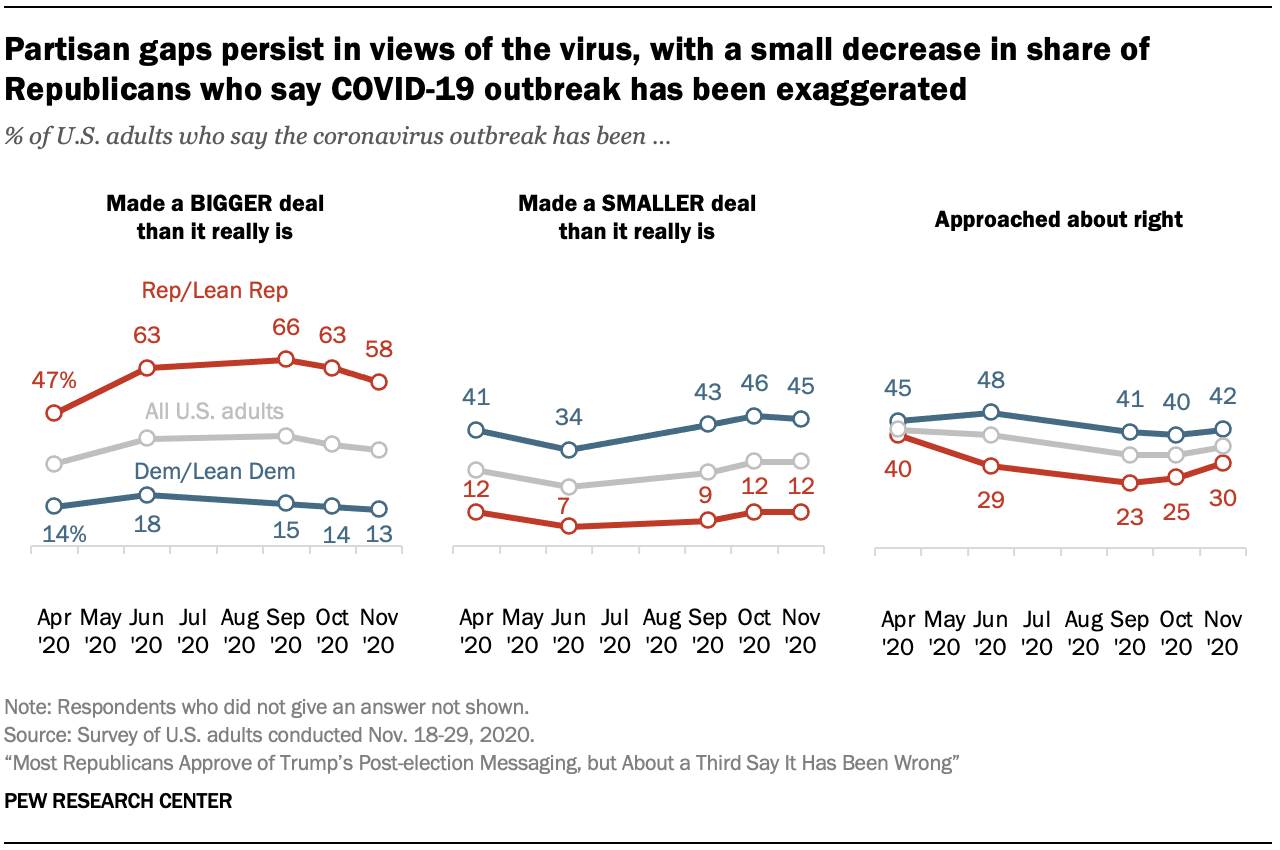 Democrats, on the other hand, are nearly four times as likely as Republicans to say the coronavirus has been underplayed (45% vs. 12%). There is a more modest partisan division in the shares who say the outbreak has been approached about right (42% of Democrats and 30% of Republicans), which reflects a 5-point increase since October in the share of Republicans who say this.

As was the case in early October and early September, where partisans get their news ties closely with their attitudes about whether or not the coronavirus outbreak has been overblown. For instance, Republicans who use only news outlets with politically right-leaning audiences are still more likely than Republicans who get news from outlets with more politically mixed audiences to say the virus has been overblown. 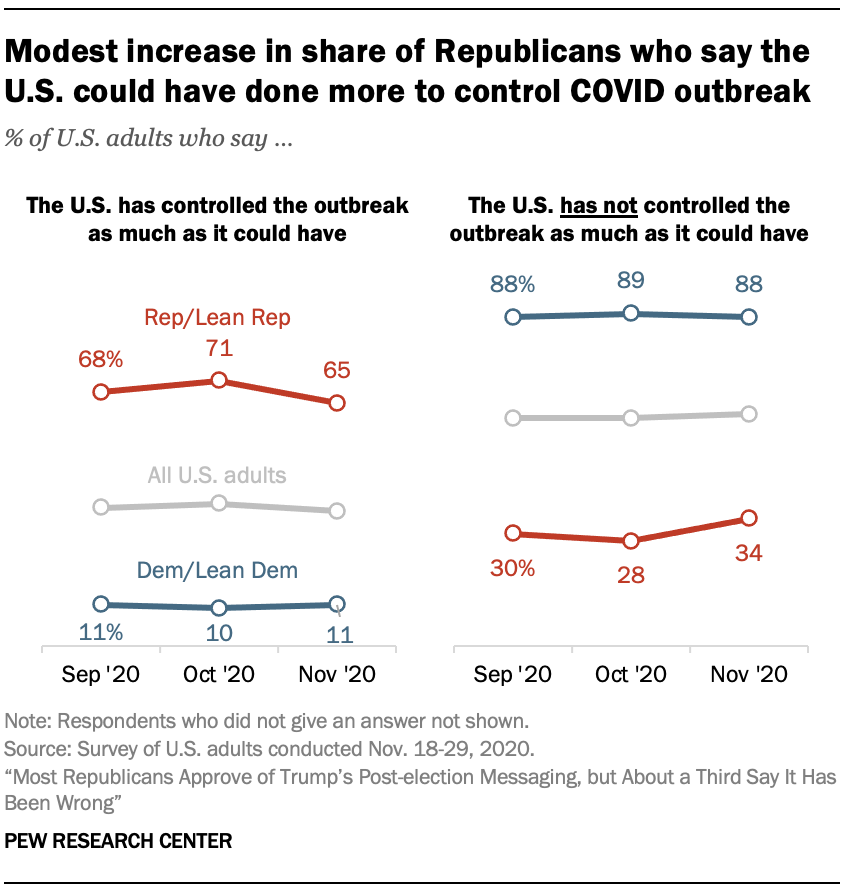 Democrats and Republicans also remain divided over whether the U.S. has done all that it could have to control the coronavirus outbreak – again, despite a recent modest shift among Republicans.

About two-thirds of Republicans (65%) say the U.S. has controlled the outbreak as much as it could have, compared with about one-in-ten Democrats (11%) who say the same. The share of Republicans who hold this view decreased by 6 percentage points since before the election.

On the other hand, about nine-in-ten Democrats (88%) say the U.S. has not controlled the outbreak as much as it could have. About a third of Republicans (34%) hold this view, up from 28% in October. Among Republicans, these views also vary by news consumption habits. 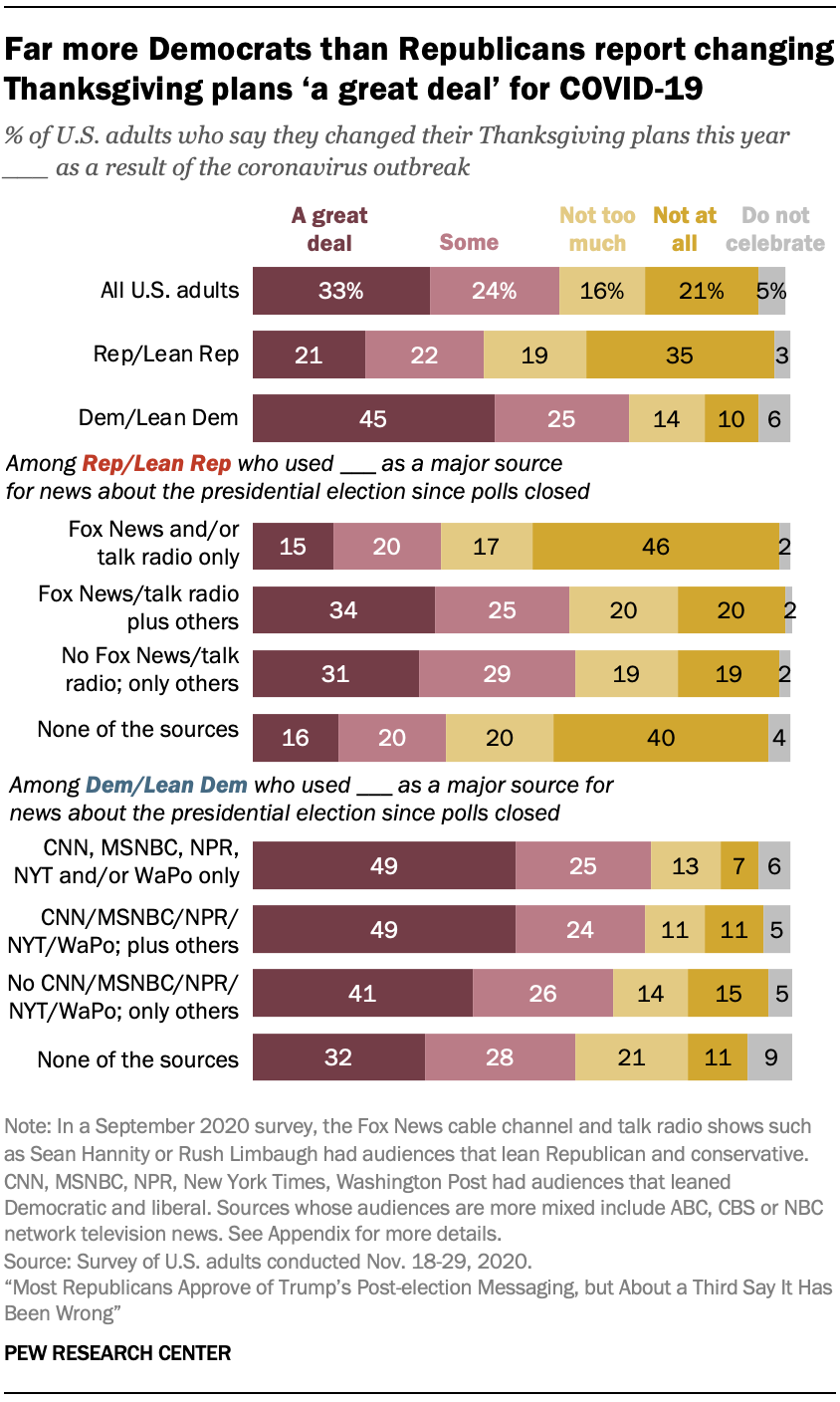 The coronavirus outbreak had widely different impacts on Americans’ plans over Thanksgiving depending on partisanship and news habits, especially among Republicans.

There is a striking partisan gap over whether plans changed for the holiday because of the pandemic. Nearly half of Democrats and Democratic-leaning independents (45%) say they changed their plans a great deal; about half as many Republicans and Republican leaners (21%) say the same. Conversely, over three times as many Republicans (35%) as Democrats (10%) say they did not change their plans at all due to the outbreak.

Among Republicans, news diet again ties closely to whether plans changed for Thanksgiving because of the coronavirus outbreak. Among Republicans who only used Fox News or talk radio as a major source for news after the election (out of eight news sources asked about; see Appendix for details), just 15% say their Thanksgiving plans changed a great deal because of the virus, while nearly half (46%) say they didn’t change their plans at all.

Two other groups of Republicans are far more likely to say they changed their plans: those who say they used other news sources in addition to Fox News or talk radio, and those who only used other sources, all of which have left-leaning or politically mixed audiences. About six-in-ten Republicans in these two groups say their plans changed either a great deal or some because of the pandemic, while only about one-in-five say they didn’t change their plans at all.

Most Republicans Approve of Trump’s Post-election Messaging, but About a Third Say It Has Been Wrong 1. Partisans disagree on post-election messages from Biden and Trump, attention to voter fraud charges 2. Americans generally approve of their news sources’ election coverage, but Republicans less so than Democrats 3. Concerns about made-up election news are high, and both parties think it is mostly intended to hurt their side
4. Americans’ attention to news about the coronavirus pandemic remains steady in November as cases surge
Wide party gap in whether Thanksgiving plans changed because of COVID-19
Appendix: Grouping respondents by major news sources Methodology