This report is the culmination of a yearlong study into Americans’ views of the news media. This report was made possible by The Pew Charitable Trusts, which received support from the John S. and James L. Knight Foundation.

The main source of data comes from a Pew Research Center survey of 10,300 U.S. adults conducted Feb. 18 to March 2, 2020. Additionally, the question about the influence of corporate and financial interests comes from a survey of 13,200 U.S. adults conducted August 3-16, 2020. Everyone who took part in these surveys are members of the Center’s American Trends Panel, an online survey panel that is recruited through national, random sampling of residential addresses. Recruiting our panelists by phone or mail ensures that nearly all U.S. adults have a chance of selection. This gives us confidence that any sample can represent the whole population (see our Methods 101 explainer on random sampling). To further ensure that each survey reflects a balanced cross section of the nation, the data is weighted to match the U.S. adult population by gender, race, ethnicity, partisan affiliation, education and other categories.

Here and here are the questions that were in these two surveys, along with responses, and the methodology. Visit our interactive data tool to access the data on Americans’ attitudes toward the news media.

The report also draws on a series of focus groups conducted by the Pew Research Center. The primary goal of these focus groups was to inform the development of the Feb. 18-March 2, 2020 survey. Ten focus groups were held in November 2019 in Houston, Texas; St. Louis, Missouri; and Charlotte, North Carolina. The report includes a number of quotations from the focus groups to help illustrate and add nuance to the survey findings. These quotes are not intended to be representative of Americans’ views, but rather as examples of how everyday people think about these topics when they have the opportunity to express themselves in their own words. Quotations may have been lightly edited for grammar, spelling and clarity. For more information, see the methodology.

Finally, this report pulls from previously reported data and findings from the yearlong study, including a previously published report that looked at more than 50 Pew Research Center surveys conducted across several years and a report that looked at Americans’ attitudes of the news media during the COVID-19 outbreak. It also draws from other Pew Research Center data on news coverage of the outbreak and of the protests in the wake of killing of George Floyd. 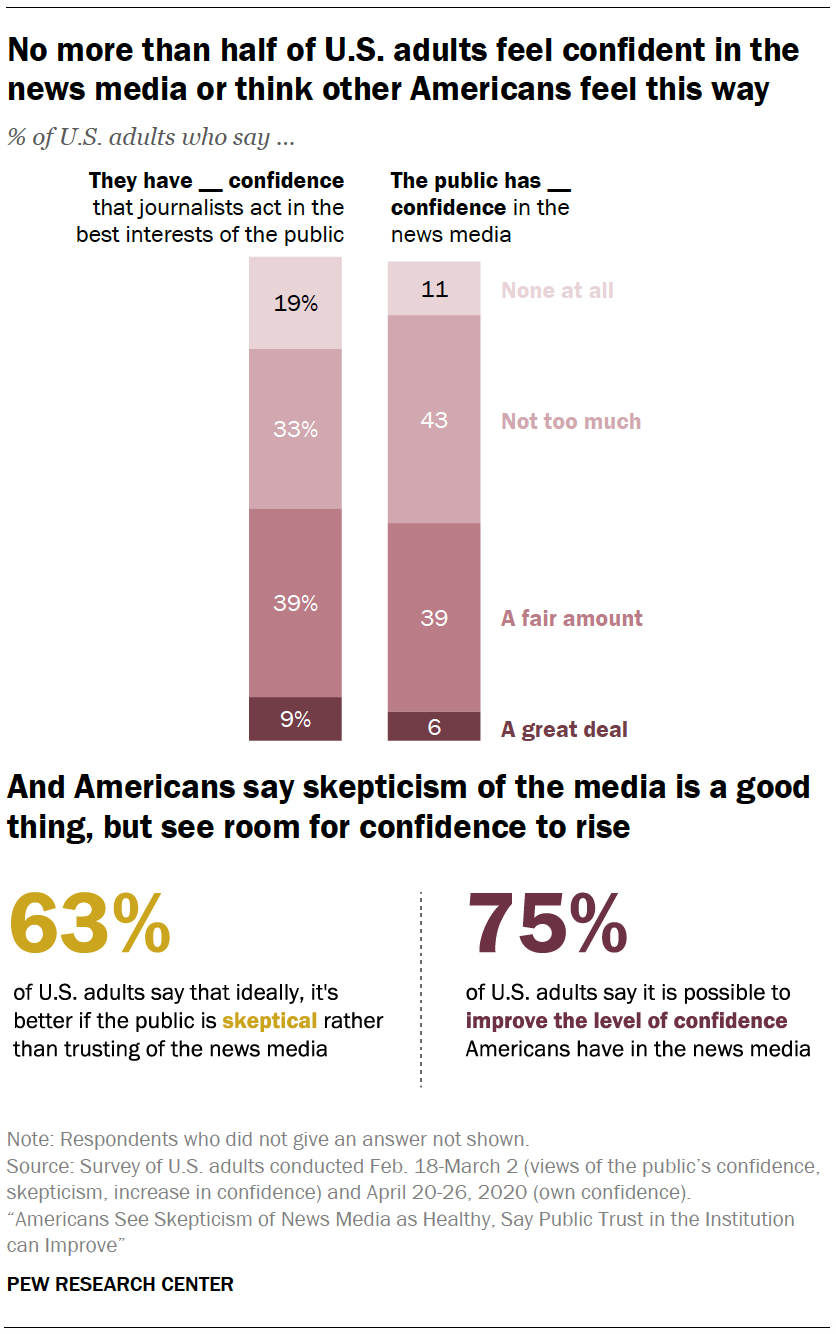 In a year filled with major news stories – from impeachment to a contentious election, from a global pandemic to nationwide protests over racial injustice – Americans continue to have a complicated relationship with the news media.

While large swaths of the public often express negative views toward journalists and news organizations, a major Pew Research Center analysis – culminating a yearlong study on Americans’ views of the news media – also finds areas where U.S. adults feel more affinity toward the media and express open-mindedness about the possibility that their trust in the industry could improve.

Many Americans remain skeptical toward the news media, questioning not only the quality of journalists’ work but their intentions behind it. For instance, no more than half of U.S. adults have confidence in journalists to act in the best interests of the public, or think that other Americans have confidence in the institution. And the public is more likely than not to say to say that news organizations do not care about the people they report on.

While most Americans (61%) expect the news they get to be accurate, nearly seven-in-ten (69%) think news organizations generally try to cover up mistakes when they do happen.

The reasons for why Americans think these mistakes happen underscore the distrust that substantial portions of the public feel: Many say that careless reporting (55%) or even a desire to mislead the public (44%) are major factors behind significant mistakes in news stories, although other, less negligent or nefarious reasons such as the rapid pace of breaking news (53%) also are seen as responsible for mistakes. 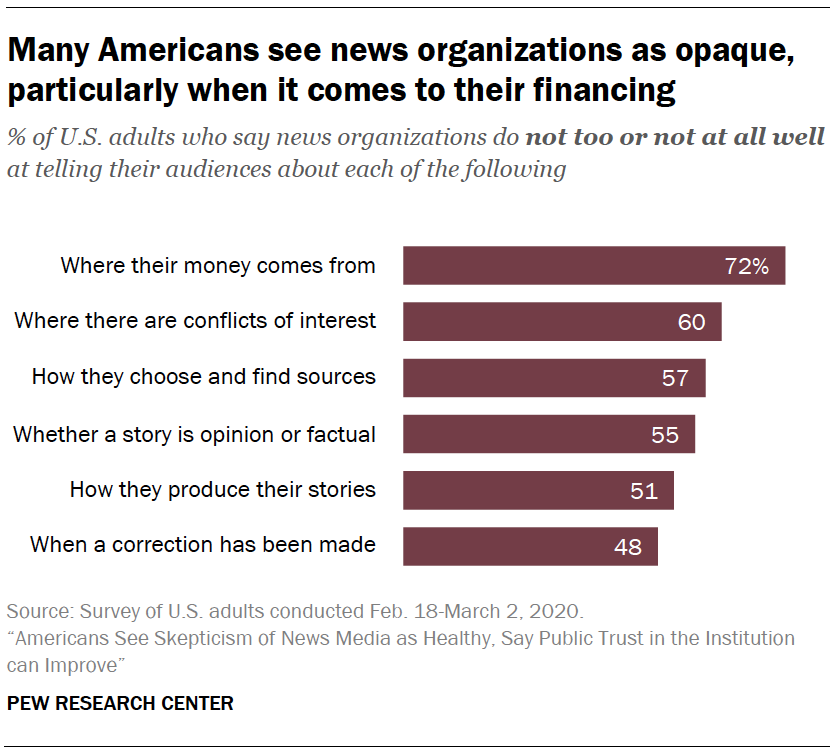 Americans take issue with what they perceive as a lack of transparency by news organizations – both with respect to the work they do and the inner workings of their companies. Indeed, not only do many people see news outlets as opaque in how they produce their stories and choose their sources, but a large majority – 72% – say news organizations do an insufficient job explaining to the public where their money comes from (see Chapter 2).

Six-in-ten U.S. adults also say news organizations are not forthcoming about conflicts of interest. On top of that, a vast majority of Americans (80%) think that the news they get is at least “somewhat” influenced by financial and corporate interests.

But findings from the study also suggest that the relationship between Americans and the media is not a lost cause. For one, the public gives the media fairly high marks for coverage of specific issues and events, including the recent coronavirus outbreak and the protests in the wake of the police killing of George Floyd.

Still, when asked directly whether Americans think their level of confidence in journalists can improve, three-quarters say such an outcome is possible.

This raises the question: Where might there be opportunities for the news media to gain more trust? First and foremost, the survey finds that personal connections with news tie strongly to Americans’ views of the media overall, echoing earlier Pew Research Center findings at the local level. Americans who feel connected to news outlets – whether in feeling valued by, understood by or loyal to them – express far more positive views toward the news media. For instance, those who feel that their news sources value them are much more likely to expect their news to be accurate and to think news outlets are transparent with audiences.

According to the findings, there is plenty of room for improvement in this area: While most Americans want to have personal connections with their news sources, many do not experience it (again in line with previous Center findings on local news). More than half of U.S. adults say their news outlets do not particularly value them (57%) or that news organizations do not understand people like them (59%), and nearly two-thirds (63%) say they do not feel particularly loyal to the outlets they get their news from.

Americans’ personal connections with specific news stories also are linked with their attitudes toward the media. When Americans encounter news stories that hit close to home, they generally have good things to say about the media’s coverage. Roughly two-thirds of those who felt personally connected to a story – either because it covered an issue they believe they are an expert on, or because it was about a significant event that they experienced or witnessed – think that story was covered well. And those who feel this way express far more favorable views toward the news media in general than those who think the story was not covered well.

One of the most fundamental ways this manifests itself is in whether people think the news they get is accurate. About three-quarters of those who think that an issue in their wheelhouse or an event they experienced was covered well (74%) also believe the news they get overall is largely accurate. Among those who say that a story close to them missed the mark, just 39% expect to encounter accurate news; this group also is far more likely to feel that news organizations do not understand people like them (see Chapter 3). 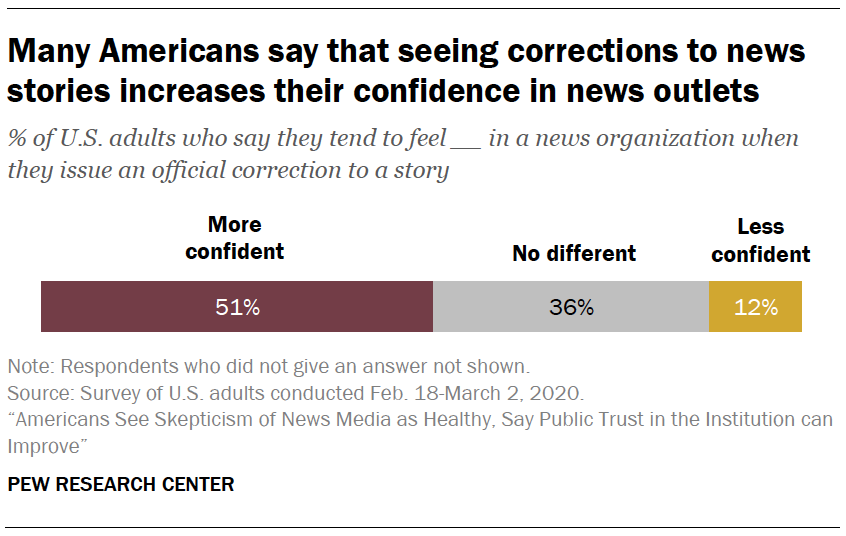 Being transparent about corrections is another area where the public says news organizations have an opportunity to gain trust. While Americans perceive a range of reasons why mistakes in stories happen, about half (51%) say that seeing official corrections from news outlets makes them more confident in that outlet, compared with just 12% who say it makes them less confident.

These are among the key findings from a yearlong study of Americans’ trust and attitudes toward the news media. This report draws on data included in a previously published report that looked at more than 50 Pew Research Center surveys; new survey data collected both before and during the COVID-19 outbreak; and a series of 10 focus groups conducted in three U.S. cities in November 2019. But the bulk of this report is based on previously unreleased data from a survey conducted Feb. 18-March 2, 2020, among 10,300 U.S. adults who are part of the Center’s American Trends Panel. Quotations drawn from the focus groups are scattered throughout the report; these quotes are not intended to be representative of Americans’ views. Instead, the quotations serve as examples of how everyday people think about these topics when they have the opportunity to express themselves in their own words.

Deep partisan divides in views of the news media, with Republicans who support Trump most critical 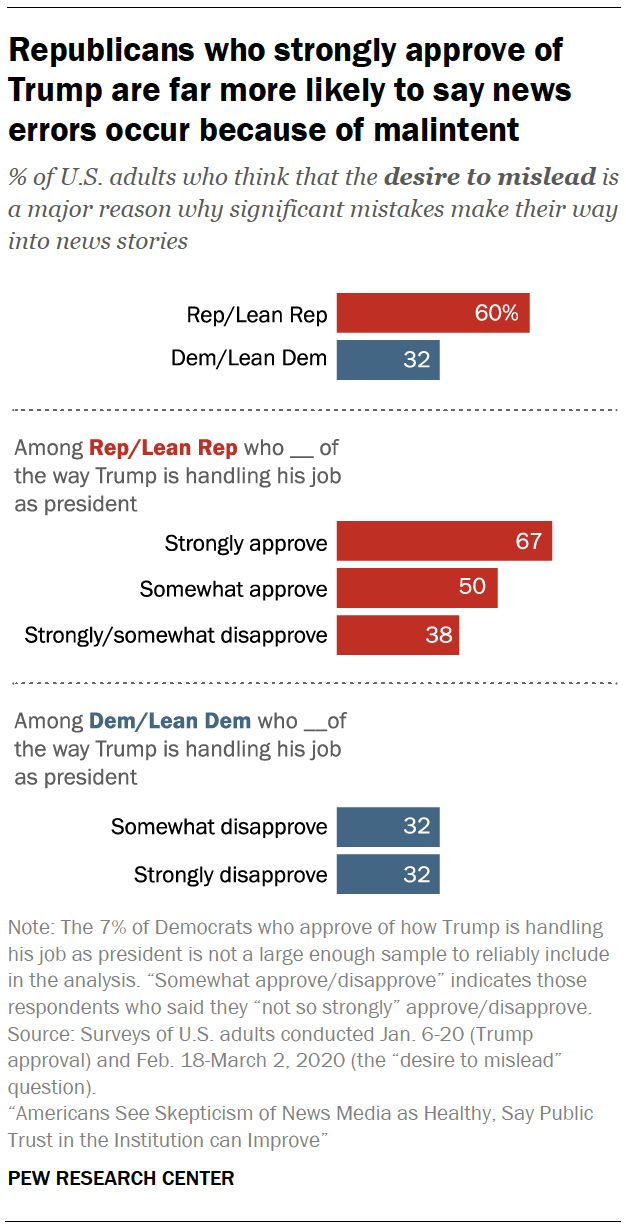 The first phase of this yearlong study established that partisanship is the strongest factor in Americans’ views of the news media. And support for Donald Trump, who continues to strike a combative tone toward journalists, is another dividing line – particularly within the Republican Party.

One area in which this plays out is in perceptions of why errors occur in news stories. Republicans overall are more likely to think that mistakes happen because of ill will. Six-in-ten Republicans and Republican-leaning independents cite a desire to mislead audiences as a major reason why significant mistakes make their way into news stories, compared with about a third of Democrats (32%) who feel this way. And within the GOP, this view is especially prevalent among Republicans who strongly approve of the job that Trump is doing as president.

But just because Republicans consistently express far more negative sentiments toward the news media does not mean that Democrats are always singing the media’s praises. For example, Democrats – like Republicans – are more likely to say that news outlets do not care about the people they report on than say they do care.

There also are places where the two parties see more eye to eye. Majorities of both parties think it is beneficial for society to be skeptical of the news media, large portions think that confidence in the institution can increase, and they generally agree on the qualities that are important in choosing news sources (see Chapter 4).

Black Americans seek out news sources that cover people like themselves

The study also finds that beyond partisanship, there also are sharp differences across certain segments of the population in their attitudes of, relationships with and priorities for the news media. At a time when questions about representation in newsrooms are amplified in the wake of the protests in response to the killing of George Floyd, Black adults also are far more likely than others to say it is important to see themselves both in news coverage and in the newsroom. 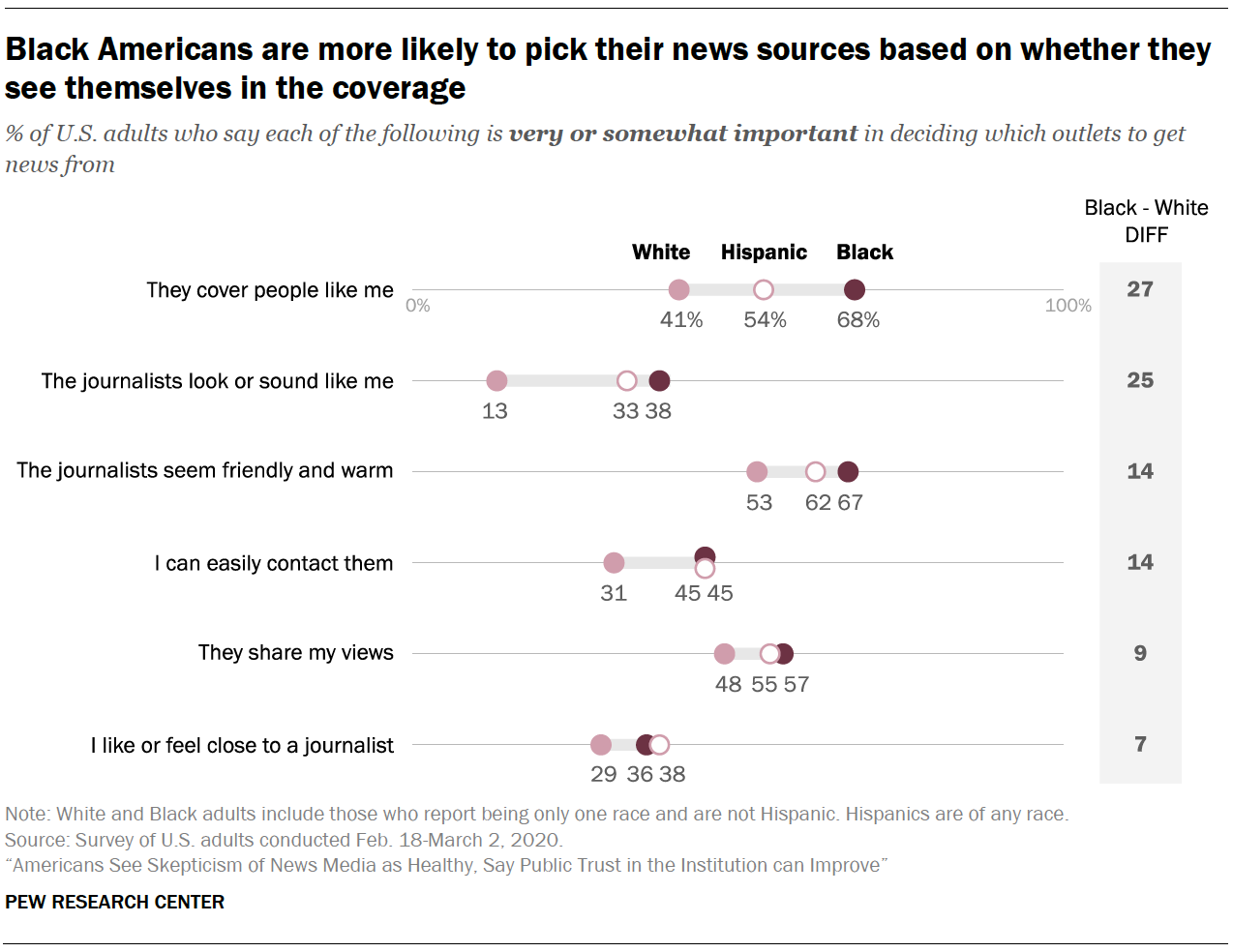 When asked whether six different aspects of personal connections between news organizations and their audiences are important in deciding where to get their news from, Black Americans are more likely than White Americans to say each is at least somewhat important. But two factors related to representation stand out: Nearly seven-in-ten Black adults (68%) say it is at least somewhat important that their news outlets cover people like them, 27 percentage points higher than White adults (41%) and 14 points above Hispanic adults (54%). And nearly four-in-ten Black Americans (38%), along with a third of Hispanic Americans (33%), think it is important for the journalists themselves at a news outlet to look or sound like them, compared with just 13% of White Americans who say the same.

Next: 1. Americans are largely skeptical of the news media, but say there is room for confidence to improve
← Prev Page
You are reading page1Page2Page3Page4Page5Page6Page7Page8
Next Page →