Coverage of COVID-19 has dominated the news and resulted in skyrocketing ratings for the nation’s cable news networks. And according to a survey conducted March 10-16, 2020, as a part of Pew Research Center’s Election News Pathways project, responses to that coverage and the pandemic itself vary notably among Americans who identify Fox News, MSNBC or CNN (the three major cable news networks featured in the analysis) as their main source of political news. 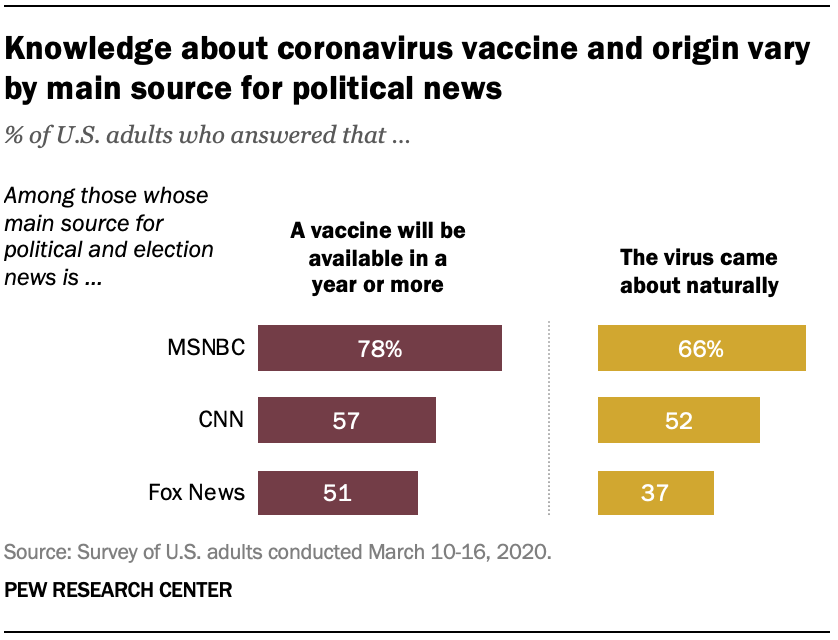 In particular, the responses to COVID-19 news from those whose main source for political news is MSNBC or Fox News are strikingly different. The views of those who identify CNN as their main news source most often fit somewhere between the two.

One such difference emerges around knowledge and understanding of the pandemic. The group who names MSNBC as their main news source is far more likely than the Fox News group to answer correctly that the coronavirus originated in nature rather than a laboratory and that it will take a year or more for a vaccine to become available. On both questions, the portion in the CNN group to answer correctly falls between the MSNBC and Fox News numbers. This analysis comes from a survey of 8,914 U.S. adults who are members of the Center’s American Trends Panel. 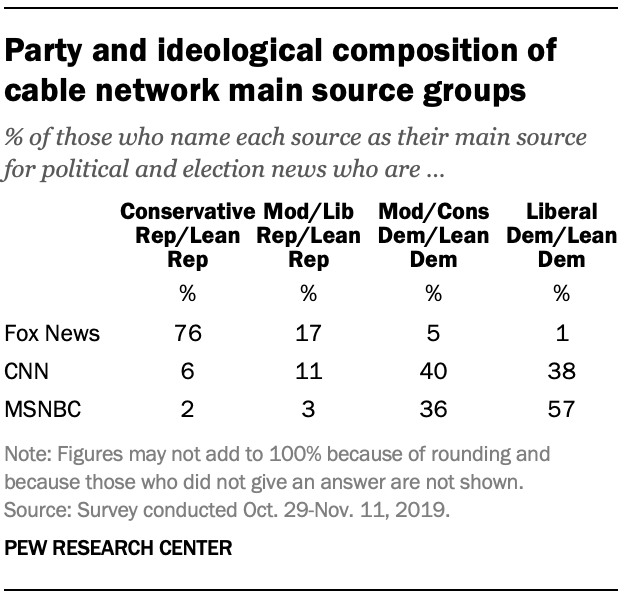 The Fox News and MSNBC groups also differ in their evaluations of the media’s coverage of the pandemic. Those who call MSNBC their main political news source are far more likely to say the media covered the outbreak somewhat or very well (92%) than the Fox News group (58%). And they are much less likely than those who name Fox News as their main source to say the media exaggerated the risks posed by the pandemic (35% of the MSNBC group vs. 79% of the Fox News group). And again, those who identify CNN as their main news source fall in between (82% rate the media as doing somewhat or very well covering the outbreak; 54% say the media exaggerated the risks).

One way this project examined news consumption was by asking people – in an open-ended question – which single source they turn to most for political and election news. This is a smaller and more concentrated portion of consumers than the outlets’ overall audiences (which asked respondents which outlets they got news from in the past week). The list of sources named by the most Americans include the three commercial broadcast networks (ABC, CBS, NBC), The New York Times, NPR, CNN, Fox News and MSNBC, as well as individual social media sites. (Nine outlets or sources in all were named by at least 2% of U.S. adults as their main source for political news. The full list of those outlets can be found here.)

These differences in the party and ideological makeup of the cable network audiences impact how those who are turning to each network are responding to the coronavirus epidemic today.

Fox and MSNBC audiences widely differ in assessments of the media’s COVID-19 performance, CNN falls in between

Of the nine different main-source groups, MSNBC’s gives the highest marks for media coverage in the survey. A full 92% say the news media have done somewhat or very well at covering the coronavirus outbreak, which is true for far fewer Fox News consumers (58%). That puts those who name Fox News as their main source in a virtual tie with those who name a social media site as their main source of political news – 56% of whom say the media performed somewhat or very well – in offering the most negative assessment.

As for those who primarily rely on CNN, 82% say the media have done somewhat or very well. It’s worth noting that the difference in the MSNBC and CNN viewer response numbers come from those who say the media performed very well (46% for MSNBC vs. 36% for CNN).

Meanwhile, the MSNBC consumers are the least likely to say that the media exaggerated the risks (35%), while 58% of them believe they got the risk about right. Among those who name CNN, 54% say that the media slightly or greatly exaggerated the risks, a percentage that puts them almost equidistant between the Fox News and MSNBC audiences. And 40% in the CNN group say the media got the risk about right. (Results for all nine news sources for the two questions in this section are available here and here in the Election News Pathways data tool.)

Large percentages of those who say MSNBC is their main source of political and election news perform relatively well on two questions testing knowledge and understanding of the COVID-19 outbreak. Roughly three-quarters (78%) say that a COVID-19 vaccine would take a year or more to develop, an answer that matches what public health experts say. That puts the MSNBC group at the top with those whose main source are The New York Times (77%) or NPR (74%) in choosing that answer. 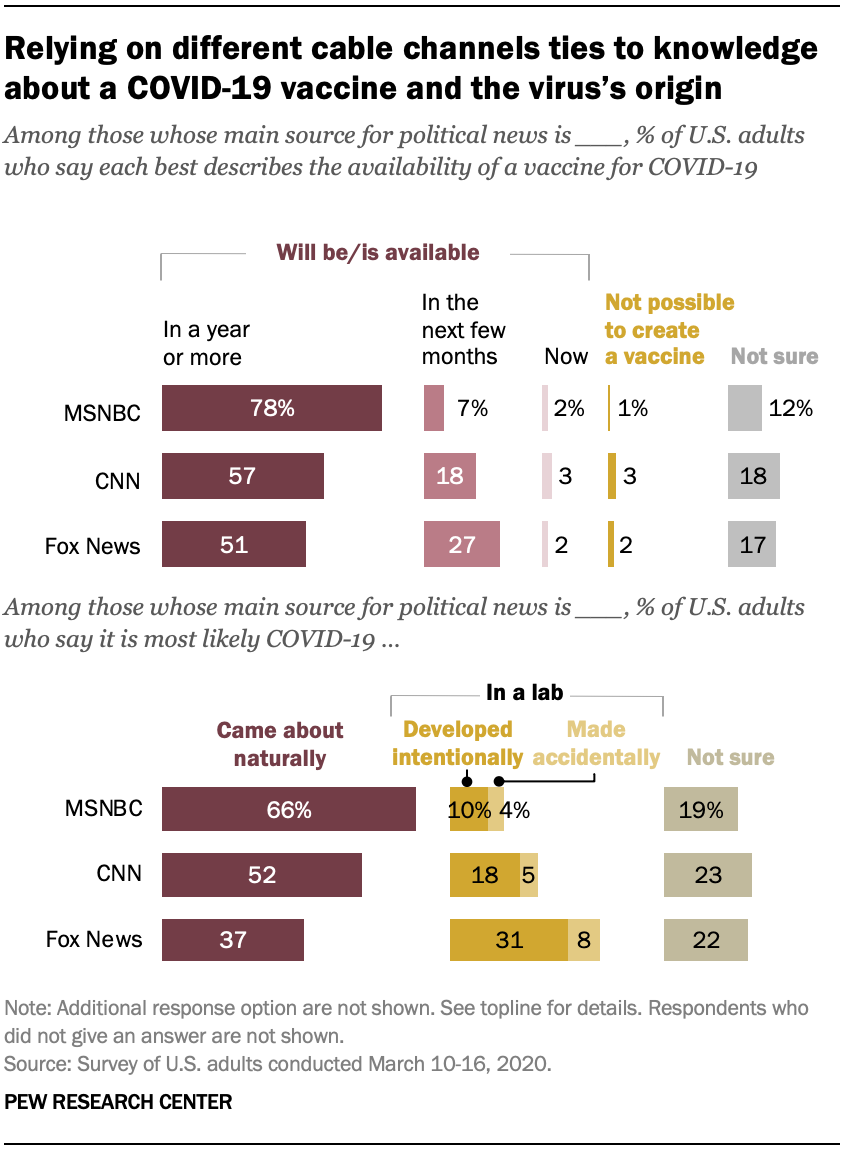 At the same time, just about half of those who name Fox News (51%) give the answer that matches the experts’, a percentage similar to the groups that rely most on the three broadcast networks — NBC (52%), ABC (53%) and CBS (53%). A modestly higher percentage of those who name CNN as their main source for political news chose the experts’ answer (57%) than those naming Fox News as their main source.

In addition, two-thirds (66%) of those who rely on MSNBC correctly answered that the coronavirus originated in nature, rather than in a laboratory. That compares with the 37% of the Fox News group who give that same answer, a response that was virtually tied with several other groups for the lowest percentage of correct answers.

Here, the CNN audience is in the middle of the MSNBC and Fox audience responses, with 52% responding that the virus occurred naturally.

In addition, 39% in the Fox News group say the virus originated – either intentionally or unintentionally – in a laboratory, compared with 23% of the CNN group and 14% of the MSNBC group that say the same thing. (Results for all nine news sources on the two questions in this section are available here and here in the Election News Pathways data tool.)

Among cable news audiences, those whose main news source is Fox News are the least likely to see the same set of COVID-19 facts across sources

Two questions on the survey probed the issue of how much of the COVID-19 news people saw was misleading or confusing. One of those questions produced similar differences as those seen above in responses from the three cable news groups; the other, however, generated something pretty close to consensus. 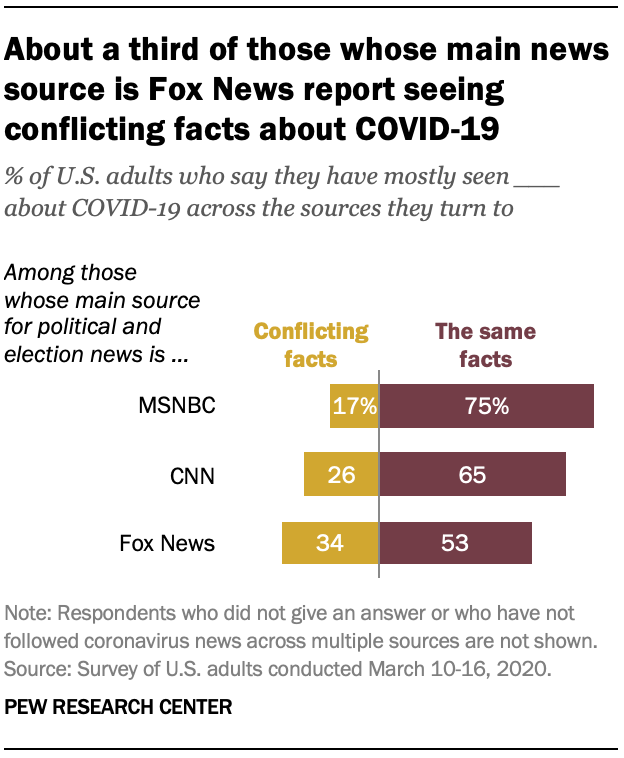 When asked if they had seen mostly the same set of facts or conflicting sets of facts about the pandemic across various news sources, 75% of the MSNBC group say they had mostly seen the same facts, one of the highest percentages of any of the nine groups. That falls to about half (53%) of the Fox News group, which puts them among the main-source groups least likely to say they have seen the same facts.

Once again, those whose main source is CNN find themselves right between the audiences of their two competitors, with 65% saying they mostly saw the same facts.

Finally, one area where there was a general consensus among those who rely most on all three cable news networks is whether they have seen news about the pandemic that seemed made up. Here, 53% of the Fox News group say they had seen a lot or some made-up news, only modestly higher than the 46% of those who turn primarily to CNN and MSNBC who say the same. (Results for all nine news sources on the two questions in this section are available here and here in the Election News Pathways data tool.)

Fox and MSNBC audiences widely differ in assessments of the media’s COVID-19 performance, CNN falls in betweenThree cable channels, three divergent responses on basic questions about COVID-19Among cable news audiences, those whose main news source is Fox News are the least likely to see the same set of COVID-19 facts across sources