The American Trends Panel (ATP), created by Pew Research Center, is a nationally representative panel of randomly selected U.S. adults. Panelists participate via self-administered web surveys. Panelists who do not have internet access at home are provided a tablet and wireless internet connection. The panel is being managed by Ipsos. 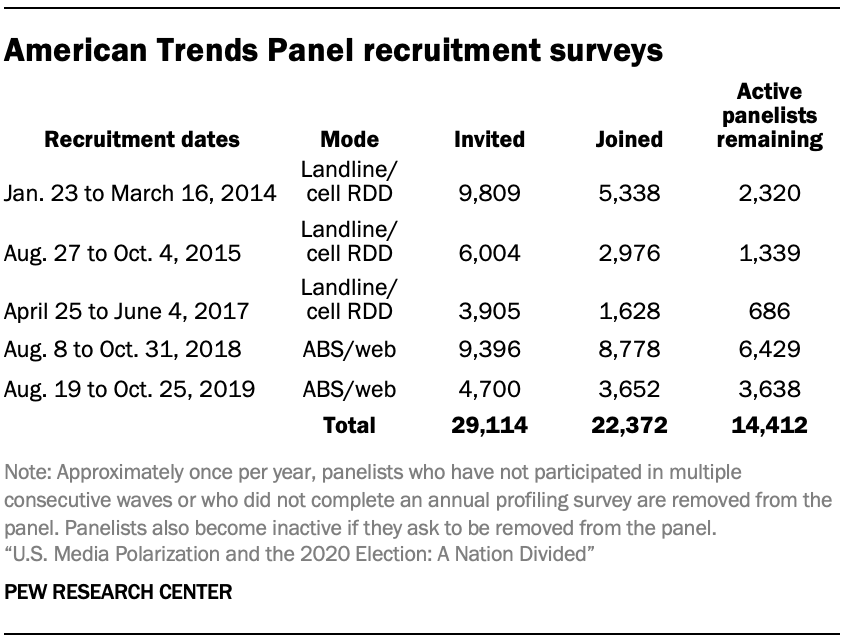 Data in the Election News Pathways project and the U.S. Media Polarization and the 2020 Election report are drawn from the panel wave conducted Oct. 29-Nov. 11, 2019. A total of 12,043 panelists responded out of 14,412 who were sampled, for a response rate of 84%. This does not include 12 panelists who were removed from the data due to extremely high rates of refusal or straightlining. The cumulative response rate accounting for nonresponse to the recruitment surveys and attrition is 4.5%. The break-off rate among panelists who logged onto the survey and completed at least one item is 0.2%. The margin of sampling error for the full sample of 12,043 respondents is plus or minus 1.43 percentage points.

The ATP was created in 2014, with the first cohort of panelists invited to join the panel at the end of a large national, landline and cellphone random-digit-dial survey that was conducted in both English and Spanish. Two additional recruitments were conducted using the same method in 2015 and 2017, respectively. Across these three surveys, a total of 19,718 adults were invited to join the ATP, of which 9,942 agreed to participate. 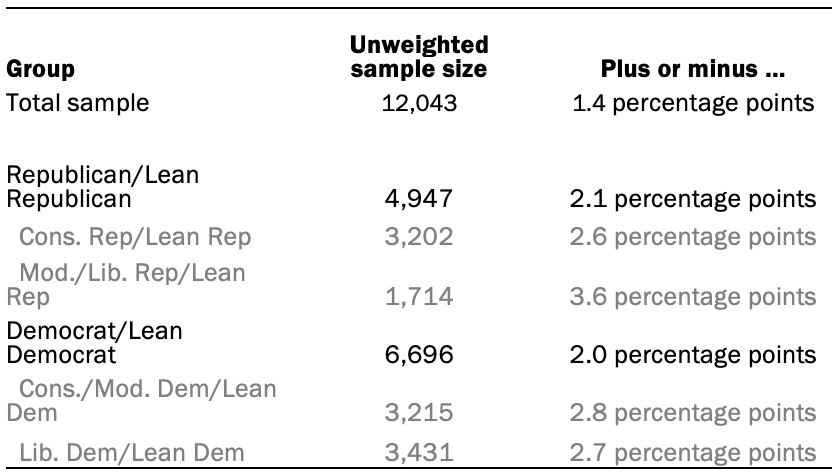 The 30 sources included in the Election News Pathways project were chosen so that respondents were asked about a range of news media across different platforms (e.g., television, print, radio, internet). Researchers also considered audience size, topic areas covered and relevance to political news during the 2016 election and afterwards.

The final list of 30 news outlets asked about consists of the following: four of the major broadcast television networks (ABC News, CBS News, NBC News and Univision), three major cable television news networks (CNN, Fox News and MSNBC), four of the largest newspapers by national circulation (The New York Times, The Washington Post, The Wall Street Journal and USA Today), the two major public broadcast networks (NPR and PBS), two political news radio programs with large audiences (The Rush Limbaugh Show and The Sean Hannity Show), two international media organizations with large domestic audiences (BBC and The Guardian), news websites regardless of their original platform that cover politics and had comparatively high traffic during the fourth quarter of 2018 (BuzzFeed, Vice, New York Post, Time magazine, Newsweek, Politico and Vox), one business-focused outlet with political content and higher web traffic in the time period analyzed than other similar outlets (Business Insider), and other outlets included in external lists of key political sources during the 2016 presidential election and after, selected with traffic and social media engagement figures in mind (Breitbart, The Hill, Daily Caller, HuffPost and The Washington Examiner).4 News sources that mostly serve as aggregators of news (e.g., Google News) and social media outlets were asked about in a separate question.

In addition to the series of questions about these specific outlets, respondents were also asked in an open-ended question to volunteer their main source for news. This allowed respondents to name any source, not limiting them to the specific ones asked about in the survey questions. If respondents volunteered more than one source, the first one mentioned was accepted.

Researchers grouped these open-ended responses together by brand; for instance “NY Times,” “NYT” and “nytimes.com” would all be counted as indicating that The New York Times was the respondent’s main source. Additionally, individual local news sources were grouped together into categories such as “local newspapers” and “local TV.”

All outlets that were named by 1.0% or more respondents as their main source for news are reported in the topline. All other sources named are grouped into “Other”.

Awareness, trust, distrust and use of news sources

Average audience placement of each outlet based on party and ideology

One section of the report shows the average audience placement of each of the 30 news outlets in a number line based on an index of self-reported party identification and political ideology. Each respondent was assigned a value on a nine-point index based on their responses to questions about their party identification and political ideology. The placement of each outlet’s audience is based on the average value of those who reported getting political and election news from the outlet in the past week. The number values in the index are:

U.S. Media Polarization and the 2020 Election: A Nation Divided 1. Democrats report much higher levels of trust in a number of news sources than Republicans 2. Americans are divided by party in the sources they turn to for political news 3. Ideology reveals largest gaps in trust occur between conservatives and liberals 4. In recent years, partisan media divides have grown, largely driven by Republican distrust Appendix: Detailed tables Acknowledgments
Methodology
American Trends Panel survey methodologySelection of news sourcesMain source of political and election newsAwareness, trust, distrust and use of news sourcesAverage audience placement of each outlet based on party and ideologyOutlet groupings by audience makeup